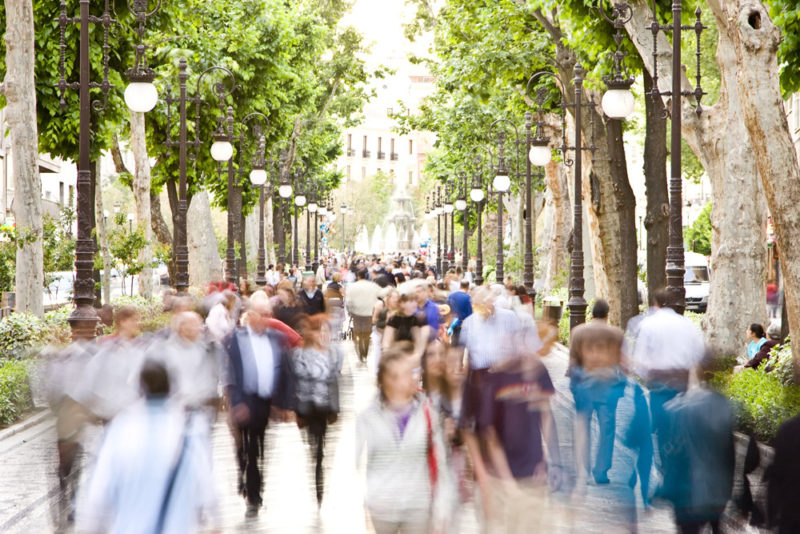 Fifty years ago on June 1 and 2, 1966, Ian McHarg, Grady Clay, Campbell Miller, Charles R. Hammond, George E. Patton, and John O. Simonds were convened by the newly formed Landscape Architecture Foundation (LAF) at Independence Hall in Philadelphia. Motivated by a sense of crisis about the environment and its future, they proclaimed the role of the landscape architect as critical to help solve it and drafted and signed a Declaration of Concern outlining a four-pronged strategy to multiply the effectiveness of the limited number of landscape architects and produce more trained people to cope with the future environment they foresaw.

This was the 1960s. It was a volatile time and an era of activism. It was an extraordinary time. Rivers were on fire, pesticide use was leading toward a Silent Spring — and a growing concern for the environment could no longer be ignored and avoided. The signers of the Declaration of Concern were deeply distraught with the way land was being developed and what was happening to the American landscape. In their words:

“What is merely offensive or disturbing today threatens life itself tomorrow. We are concerned over misuse of the environment and development which has lost all contact with the basic processes of nature. Lake Erie is becoming septic, New York City is short of water, the Delaware River is infused with salt, the Potomac River with sewage and silt. Air is polluted in major cities and their citizens breathe and see with difficulty. Most urban Americans are being separated from visual and physical contact with nature in any form. All too soon life in such polluted environments will be the national human experience.”

Today, as in 1966, landscape architecture has a vital role to play in the efforts to solve the complex interdisciplinary problems we face. But 50 years later, is it time to revisit the Declaration signers’ theory of change and the strategies that enable landscape architects to make their contribution?

Tools of the Time

These bold visionaries and advocates were empowered to act not only by the crisis they were confronting, but also by the political and social/cultural context of the time. The 1960s were a time of increasing environmental awareness that led to ground-breaking policies and new agencies and programs. The first Earth Day on April 22, 1970 brought out an estimated 20 million Americans at rallies and activities across the nation — 20 million people! The state of the environment was getting broad attention and support from both political parties, rich and poor, students and business people.

These laws were revolutionary and had a profound impact, particularly with respect to truly toxic substances. Yet, growth and development continued largely unchecked, in both the U.S. and around the world. Over time, we began to see and understand the cumulative problems of more “invisible” and pervasive pollutants like carbon emissions and stormwater runoff, and long-term landscape alterations through deforestation, sprawl, and industrialized agriculture. 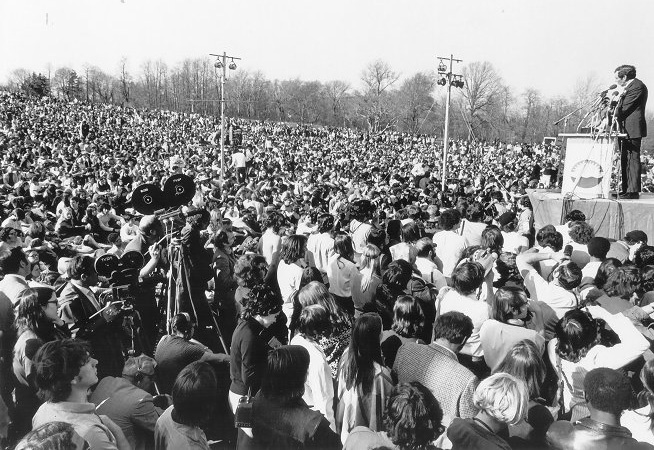 The large crowd in Fairmount Park in Philadelphia on the first Earth Day in 1970. (University of Pennsylvania Archives)

What were seen as regional and national environmental issues 50 years ago are recognized as global issues today. As a consequence of growing populations and consumption, we face enormously complex challenges like climate change and adaptation, rapid urbanization, food insecurity, mass species extinction, and inequality. You only have to look as far as the mainstream news to see examples of water shortages in the western U.S., poor air quality in China’s megacities, inhumane living conditions in Latin American slums, and desertification in Africa to see that we are still in a state of environmental crisis.

The scale and complexity of today’s problems are massive and even more challenging given a growing societal disconnect from nature. Yet through science, we have a much deeper understanding of our environment, human health, and global systems. We understand that natural and man-made systems are completely interconnected and interdependent. We also recognize that environmental problems require solutions that weave together political, economic, and social/cultural responses, as well.

In this age of information, collaboration and technology transfer happen at a global scale and a frenetic pace, affording us an unprecedented opportunity to work together. The United Nations Framework Convention on Climate Change, Sustainable Development Goals, and upcoming Habitat III Conference on Housing and Sustainable Urban Development are examples of the ambitious visions and agendas we can create when we come together. 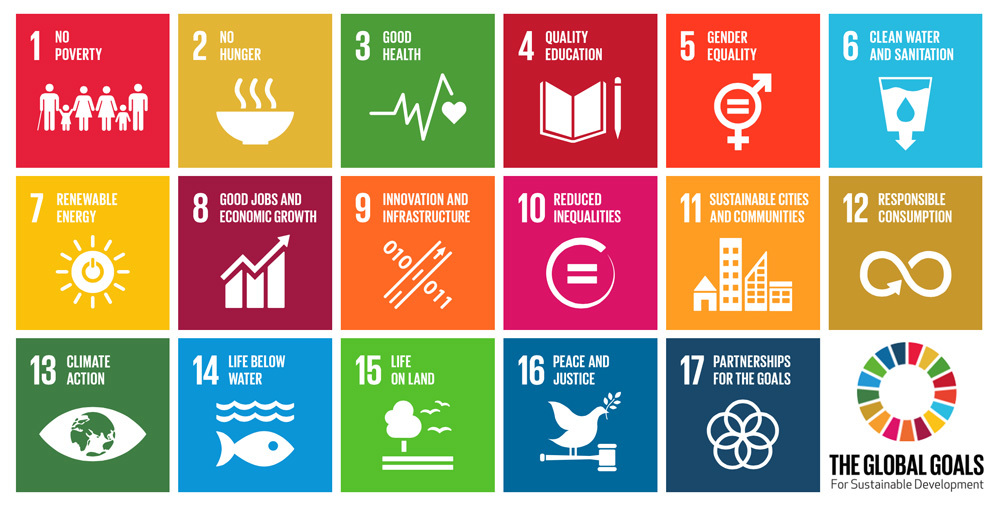 The Role of Landscape Architecture

Despite the tremendous achievements of the last 50 years, the Declaration of Concern is remarkably and eerily still relevant today. Change a few pronouns, add a global perspective, and include climate change and its ecological, social, and economic effects, and the need for landscape architects to assert their professional expertise is even more urgent. As the Declaration states:

“There is no one-shot cure, nor single-purpose panacea, but the need for collaborative solutions. A key to solving the environmental crisis comes from the field of landscape architecture, a profession dealing with the interdependence of environmental processes.”

As landscape architects, we are uniquely trained to design for natural resources, natural processes, and people. This systems thinking and “landscape approach” give us a unique perspective and role to play in addressing the challenges of our time because no matter how sustainability is defined — zero carbon, zero waste, net zero water, biodiversity, livability — it cannot be achieved without considering landscape solutions. The world’s ambitious visions for sustainable development and climate change adaptation will need the landscape perspective and the design skills of landscape architects to operationalize these aspirations and successfully give them form.

On June 10-11, LAF is hosting an unprecedented Summit in Philadelphia to set the course for landscape architecture to make its vital contribution in the 21st century. The Summit on Landscape Architecture and the Future will bring together a diverse group of preeminent and emerging thinkers and influencers within the field of landscape architecture to critically reflect on what the profession has achieved over the last 50 years, declare bold ideas for what it should achieve in the future, and discuss how to get there. 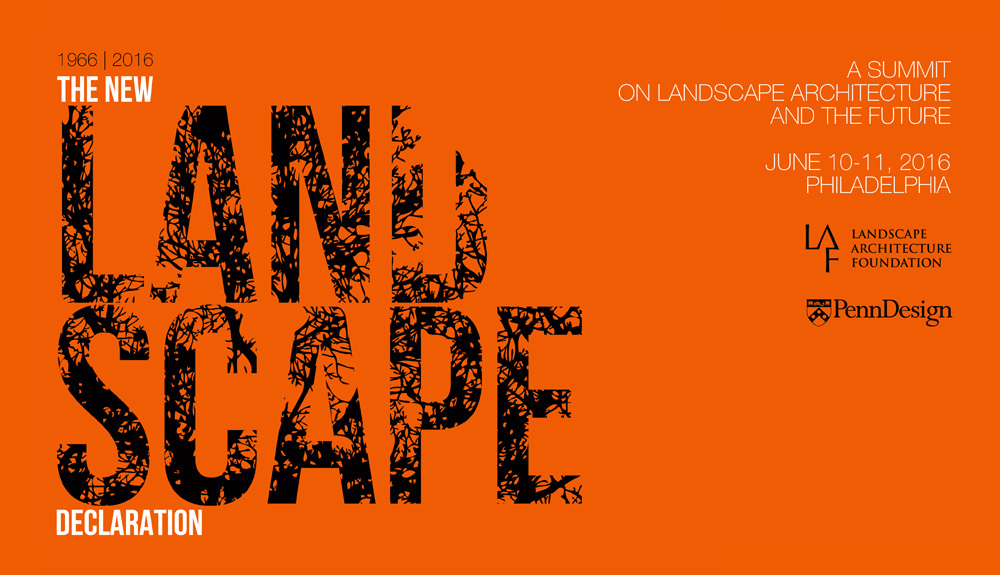 This one-time historic convening of the profession will lay the foundation for a redrafting of the original 1966 Declaration of Concern and a landmark publication of the ideas presented. The world needs what landscape architects have to offer, and we have to get it out there in a way that others are open to receiving it. Come join us in Philadelphia to offer your voice and design leadership as we start the process of forming The New Landscape Declaration to position the profession for the next 50 years and make our vital contribution.

—
Barbara Deutsch, FASLA is the Executive Director of the Landscape Architecture Foundation (LAF). She brings 10 years of award-winning marketing experience from IBM before becoming a landscape architect. Prior to LAF, Barbara worked on re-greening cities from Hong Kong to DC. She served most recently as an Associate Director for BioRegional’s OnePlanet Communities program to deliver zero carbon, zero waste, livable communities.

Barbara Deutsch
Barbara Deutsch, FASLA is the CEO of the Landscape Architecture Foundation. Barbara has a diverse background in both the private and not-for-profit sector. She brings ten years of award-winning marketing experience from IBM before making a career change to become a landscape architect. This experience was influential in the development of LAF’s Landscape Performance Series strategic research initiative. Prior to LAF, Barbara worked on re-greening cities from Hong Kong to Washington, DC. She served most recently as an Associate Director for BioRegional’s OnePlanet Communities program in Washington, DC to deliver Zero Carbon, Zero Waste, Livable communities. In addition, she served as Senior Director of Casey Trees where she led the 2002 Street Tree Inventory, Citizen Forester Program, and 1425 K Street Green Roof Demonstration Project. She was principal investigator for the award-winning EPA Grant “The Green Build-out Model: Quantifying the Stormwater Management Benefits of Trees and Green Roofs in Washington, DC”, which has helped inform EPA’s proposed new stormwater ruling and the District of Columbia’s stormwater planning and programs. Barbara earned a B.S. in Commerce from the University of Virginia, a Master's in Landscape Architecture from the University of Washington, and was awarded a Loeb Fellowship at the Harvard Graduate School of Design.