The Rocker that makes the most of where you sit! The multidisciplinary SOFT Rockers project, which has been developed by KVA Matx, Boston, under the coordination of Sheila Kennedy and Junqmin Nam, started in 2011 with the installation of innovative rocking lounge chairs at Killian Court, in the Massachusetts Institute of Technology. They were originally created by MIT students led by Professor Sheila Kennedy for MIT’s Festival of Arts, Science and Technology, featuring organic shapes that embellished the landscape and invited people to rest and reenergise with their rocking movement. This way of cooling down may sound not new but what about resting on these comfortable rockers while charging your mobile devices? And using your balance to optimize the generation of electricity, being part of a design that integrates technology and Nature? 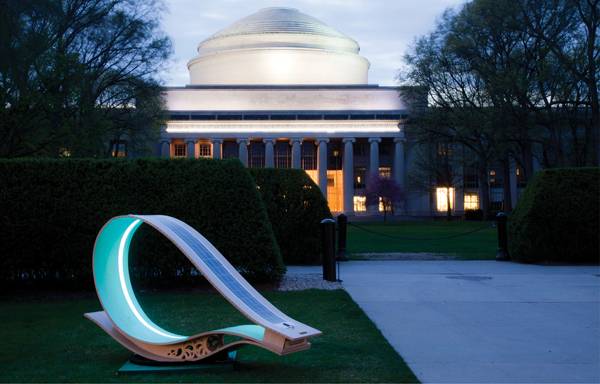 Garden Lounge Chairs as Electricity Generators Having our cell phones run out of battery can spoil our outdoor staying since they provide several functions that facilitate either our physical activity or leisure time while keeping us updated on news and personal or professional tasks. To recharge them we are forced to go back indoors where electrical power sources are available. SOFT Rockers came to fill this gap between technology and outdoor leisure by integrating a harvesting energy system in the furniture, consisting of flexible solar panels, embedded into the rockers’ external surface, which transform luminous energy into electricity. 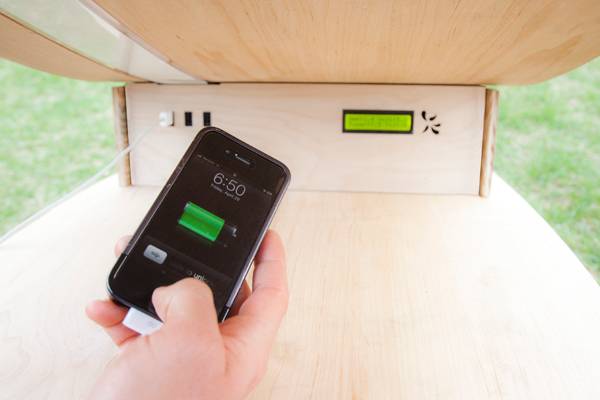 Hook your device up to the power. Photo Credit Phil Seaton, Living Photo

Energy Storage The energy is stored in a 12 Ampere-hour battery that enables people to charge or run their cell phones, tablets and other devices through three USB outlets. In addition, the battery provides power for the rockers’ lighting, making possible their use for social gatherings in the evening. Parametric Modelling, What’s That? The ingenious system that constitutes SOFT Rockers was developed with the use of parametric design software. By relating the geometry of the rockers to the variables of environment and occupancy, it was possible to create furniture that adapt to their different values. 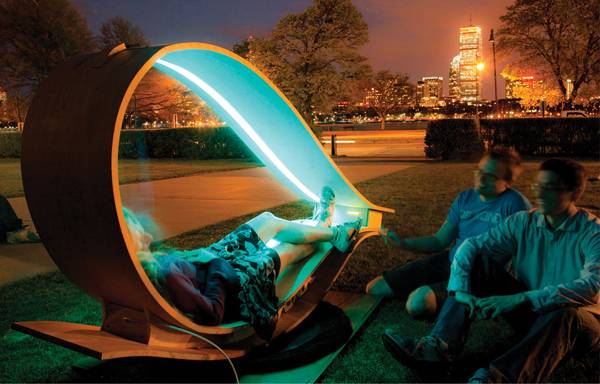 Benefits of Parametric Design This method of design makes possible the mass-customization of the rockers since they can be adjusted to the sun inclination as well as to the latitude of the place they are installed. And the most interesting part is the interaction between the body weight and the rocker through a mechanism that is sensitive to the way the person orients the rocker to the sun. A rotating base allows the person that is sitting to adjust the rocker’s position until obtaining total shade inside. Then, the person can check on a small dash board if his/her body’s power of balancing is contributing to optimize the solar energy harvesting. Although there are several machines that transform our bodies’ movement into other forms of energy, it is rare to find examples that use our weight and a restful movement as the SOFT Rockers. As the central part of the design, we can interact with a 35 W solar tracking system and the real time energy harvesting registration that gives us feedback while we are rocking, forming an inventive loop encompassing the user, the rocker, the technology and the environment. The Fabrication Process The continuous surface that configures the leaf-like rocker’s shape was possible due to the use of a lightweight KUKA robotic arm to execute precise cuts in the soft wood panels. This method, developed by Christoph Schindler, removes part of their material while keeping the internal structure and the external surface, transforming an original rigid material into a flexible one. 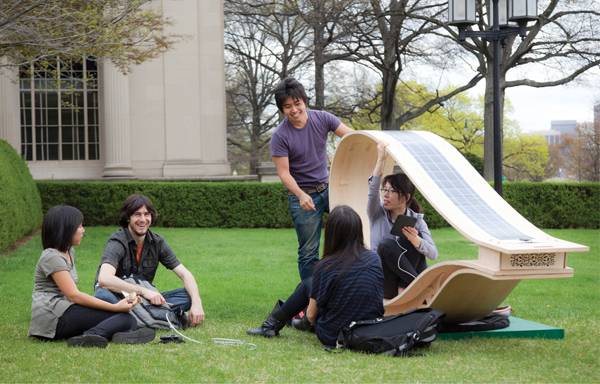 After being cut, the pieces have teethed internal surfaces that can be interlocked and joined with glue, resulting in a new panels, suitable to be bent. They are, then, vacuum-sealed in bags and, after the glue dries, they are taken out for application of veneer in both external surfaces to avoid breakage and improve their aesthetic appearance. The Design as a Synthesis of Different Functions All of the innovations brought by SOFT Rockers would be already sufficient to classify them as surprising creations but what makes them examples of excellent design is their capacity of uniting qualities considered antagonists so far. They are made to rest and, at the same time, uses our weight to improve their performance; they are considered outdoor furniture while offering some of the indoor environment’s structure; they can charge devices to keep us remotely connected and also promote social meetings; they brought back a way of relaxing proper of old times at rural residences while incorporating technological solutions. WATCH: The Cool Solar Powered Soft Rocker (Warning: Cheesy Music Alert) And, finally, they are made of wood but are flexible not only by their curves and rotating base but also by their responsive system that allows them to be adaptable to different environments. SOFT Rocker Team: Sheila KENNEDY, MIT Professor of the Practice of Architecture, Principal KVA MATx James BAYLESS, UC MArch 2014, KVA Intern Kaitlyn BOGENSCHUTZ, UC BS Arch 2013, KVA Intern Wardah Inam, MIT PhD Candidate 2015, Electrical Engineering Jungmin NAM, GSD MArch 2009, KVA Designer Shevy ROCKCASTLE, MIT SMarchS 2011 Phil SEATON, MIT MArch 2012 Matt TRIMBLE, MIT MArch 2008, RADLAB Adnon ZOLIJ, MIT BS 2010, Electrical Engineer Vicor, Inc. Article written by Tania Gianone Return to Homepage Published in Blog