Pavilion at the Ljubljanica Embankment, BB Arhitekti, Ljubljana, Slovenia For hundreds of years, European cities relied on the rivers they were built around for transportation and for sending and receiving goods. In the modern world, these rivers have become novelties or tourist attractions, and locals have become out of touch with the grand bodies of water that helped form their cities. Such was the case for the Ljubljanica River in Slovenia until the city dreamed up a way to reconnect the people to the river. 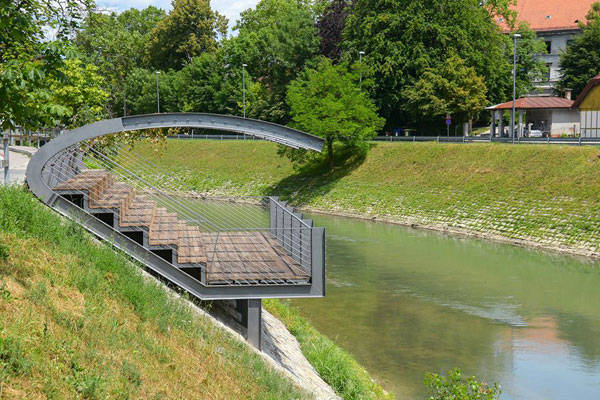 The riverbank had not been touched since the 1930s, when the architect Jože Plečnik defined the river with his monumental buildings, open squares, canals, embankments, and riverside parks. Plečnik envisioned the river as the center of the city and sought to transform Ljubljana into a cultural center. But by the 21st century, his vision had died. The river lacked modern infrastructure, and the car had become the primary means of transportation, tarnishing the allure of his walkable city. Those changes, combined with a decline in businesses due to urban sprawl, left the city in desperate need of help. 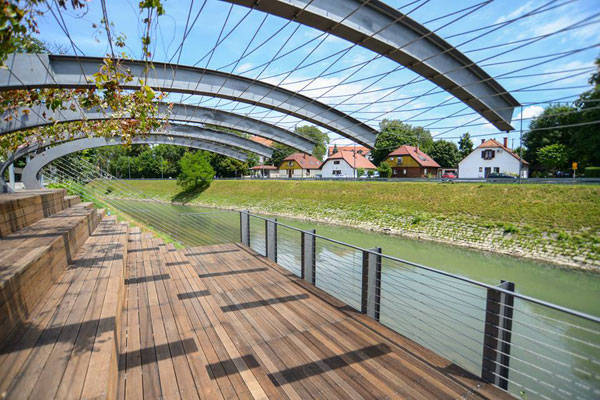 So city officials stepped in with a plan to rebuild the city. In 2004, Ljubljana City Council decided to invest more than 20 million euros to rebuild the riverbank, with the hope that the city would experience an economic and social revival. One of the interventions included a steel pavilion that was mounted at the Petkovškovo embankment as a temporary public space meant to reconnect the city’s street level — and pedestrians — to the river. The new public space was also meant to serve as a social experiment to test the responses of people to such a space and to the river. 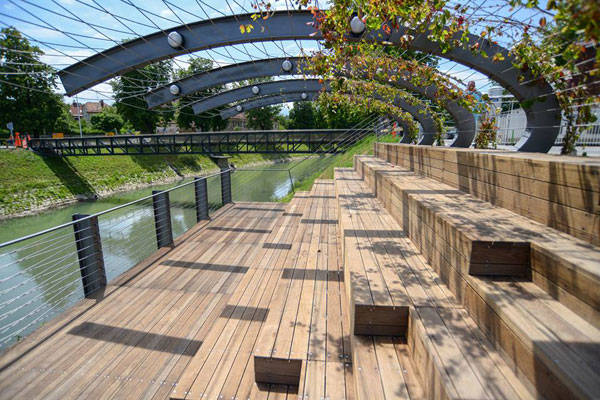 What has been the outcome of the experiment? Shortly after its 2007 installation, visitors began to flock to the space and, as it grew in popularity, other public projects began to pop up along the riverbank. The river slowly began to be reconnected with the people, and the city began to experience a new burst of life. Related articles: 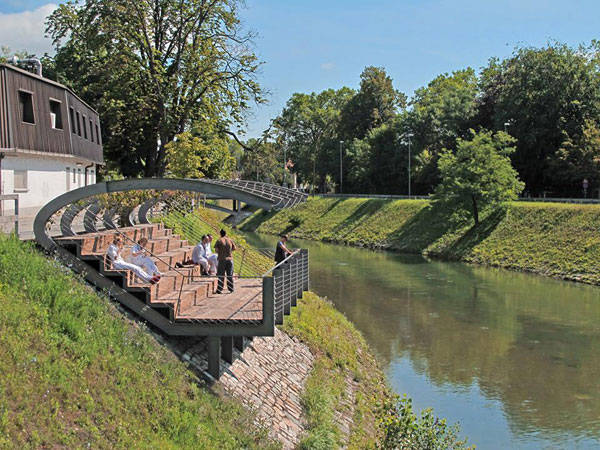 Photo Credit: Pavilion at the Ljubljanica Embankment, by BB Arhitekti by Saša Pančić

Award Winning  Design The pavilion is multifunctional: When it is not being used to host cultural events, visitors take it over as a quiet lunch spot or as a place to just sit and enjoy the view. Because of its popularity, the pavilion, along with other riverside projects, won the “European Prize for Urban Public Space in 2012” and was included in the 2013 book “Archipendium 2014”, by Nils Peters. As the riverbank increased in popularity, city officials sought to rearrange the Petkovšek embankment to better accommodate more development. The pavilion was disassembled and moved to where it now sits, near a new pedestrian bridge on Lipičeva Street, where it is still a favorite spot to just sit and enjoy the beauty of the river. In its new location, it also provides a much needed outdoor space for patients and visitors of the nearby hospitals, and continues to attract a crowd. The Temporary Made Permanent The pavilion is a montage construction, composed of six curved steel beams, and includes benches, a fence, a platform, and a roof where climbing plants — Virginia Creeper, (Parthenocissus quinquefolia) known for its brilliant fall color — are allowed to grow to provide shade for those below. Since it was always intended to be temporary and able to be moved, the shape of the pavilion can be adjusted to fit the topography of the site it occupies. 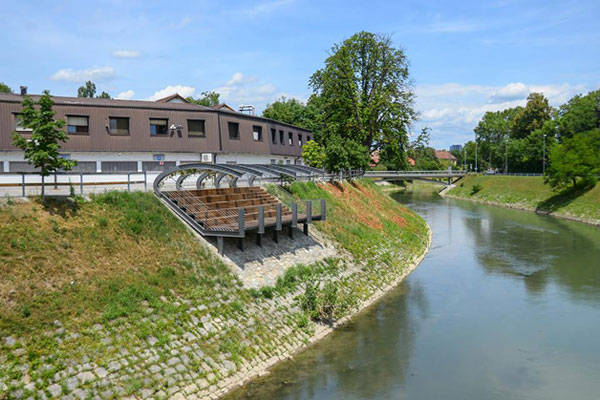 Urban Waterfront Regeneration Realised Now, more than 80 years since Plečnik envisioned a city built to rival Athens, the historic city of Ljubljana is joining the ranks of other European cities for its innovation and landscape architecture. And thanks to projects such as the pavilion, the people are once again connected to their river. beautiful and functional space. Recommended Reading: