Article by Taylor Stapleton We take a look at 5 Reasons Why Planting Fruit Trees Along Sidewalks is a Terrible Idea. Landscape architecture has often been touted as a profession that can solve urban problems, but sometimes we get a little ahead of ourselves. Recently going viral is the idea to replace street trees in our cities with fruit trees, providing food for the homeless during the summer and fall. While a nice thought in theory, this would actually be a terrible idea, and here is why: 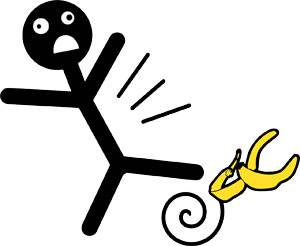 1. Will enough fruit even get picked? It is very likely that a majority of the fruit would go unpicked. What isn’t picked would spoil and fall to the sidewalk below, creating a mess that would stink and attract insects such as wasps. The sidewalks would become slippery, creating a health and safety issue. 2. Would the government support it? The government just wouldn’t do it. With the health and safety issue of slippery sidewalks, there is a strong possibility of the city being sued if people were to trip and hurt themselves. There is also a large cost associated with fruit trees. The mess would need to be cleaned by city employees, and fruit trees require a lot of maintenance and nurturing. Watering, fertilizing, and pruning are just a few things that would be required on a regular basis. Essentially, a city would need to dedicate employees just to the care of these fruit trees, costing a lot of money. 3. Just how tolerant are fruit trees? Street trees are exposed to many modern toxins on a daily basis. Regular street trees are chosen for their tolerance of air pollution, a trait that fruit trees do not possess. Pollution from passing cars would lead to problems such as disease and sub-standard fruit growth. This would mean that the trees would need to be sprayed with chemicals, which in public places is never a good idea. 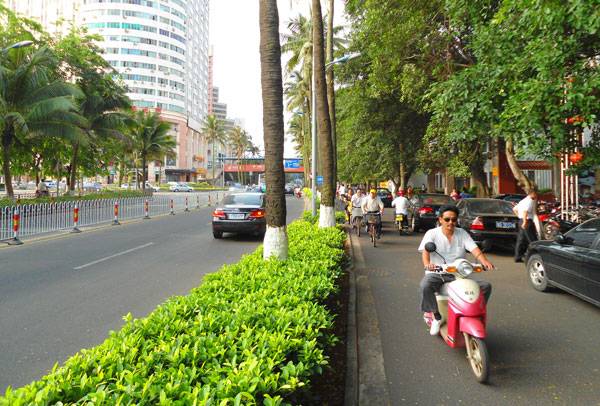 Would this be a good environment for a fruit tree? Image: “Haikou street and bike lane – 01” by Anna Frodesiak – Own work. Licensed under CC0 via Commons

4. Would fruit tress have enough room to develop? Pollution from passing cars and limited root space stunt the growth of the current street trees found in most cities The trees often need to be replaced every few years. It is said that street trees only live on average for seven years. This means that fruit trees might not even reach the maturity needed to produce fruit — it takes between two and five years for an apple tree to bear fruit and between four and six years for a pear tree to mature. Even if apple trees were chosen for their faster fruit bearing, you might only get a few years of good fruit production out of the tree before it needs to be replaced. And that’s being optimistic, assuming that the fruit tree — which is not known for being tolerant of pollution — would live as long as the average street tree. 5. In such a linear format, how can we guarantee they all enough sunlight? Fruit trees are highly sensitive to sunlight, requiring a certain amount each day. Not only could this be a problem because of tall buildings that are common in cities, but also because of pollution. Car exhaust negatively affects growing fruit, as it contains sulfur dioxide and nitrogen oxides that coat the leaves, preventing light absorption. Without the proper amount of sunlight, fruit-bearing trees are unable to photosynthesize, leading to small and poor-quality fruit. 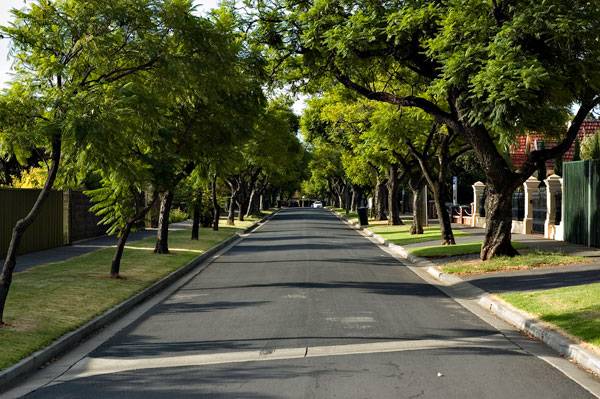 Can we make sure the fruit trees get enough sunlight on the street? Image: “Toorak Gardens Street” by Dally Horton at the English language Wikipedia. Licensed under CC BY-SA 3.0 via Commons

Many types of smoke pollution — from combustion engines and cigarette smoke — contain ethylene, which is produced naturally by fruit as it ripens. If fruit is exposed to smoke for extended periods, it will ripen prematurely, a practice commonly used by commercial fruit farmers to ready fruit for sale. However, when these fruit are not being picked on a regular basis and the process happens so quickly that the stems are unable to support the weight of the fruit, the fruit will fall to the ground uneaten, leading back to problem number 1.

An Unrealistic But Well-Meaning Idea

Fruit trees replacing street trees to grow food for the homeless is an unrealistic but well-meaning idea. While this wouldn’t work, it is heading in the right direction. A better idea would be to have community orchards that are freely accessible to the homeless to harvest. Combining urban farming with social outreach is an idea that is taking off in many cities. For example, look to what is happening in Detroit. WATCH: Hantz Farms: Detroit’s Saving Grace

Several different non-profit organizations, including Urban Farming and Michigan Urban Farming Initiative, are repurposing abandoned plots throughout the downtown area as urban farms. Each plot has been set up to grow a variety of fruits and vegetables that are maintained either by the group or by the community, allowing everyone to harvest. This concept doesn’t face the same problems posed by fruit trees as street trees. The trees and plants within the abandoned plots have enough space and sunlight to grow well, and they live much longer without the harmful affects of relentless car pollution. It is cost effective, as all maintenance can be done by the community. And with more people to maintain and harvest, less food will be wasted. As well, any food that is not used by the homeless or community members can be given to local soup kitchens. So while the idea going viral is not the best solution to a social problem, it does get people thinking. If you find this idea intriguing, I encourage you to start your own urban farming project or encourage your local government to follow in the footsteps of Detroit. What do you think is planting trees along the sidewalk a terrible idea? Let us know in the comments below! Go to comments Recommended Reading: