Nowadays, there are bound to be architectural ghosts in any city, as old, unused buildings slowly rot away. If formal reconstruction doesn’t work, how about giving guerrilla development a go? This is exactly what the Asta association  did with the Boema Garden Project in Cluj. A forgotten building has become a hybrid environment for concerts, workshops, exhibitions, and other guerrilla cultural events. . This informal reconversion has injected life back into an old palace.I spoke with project coordinator Dan Ioanici to learn more about how this ruin was saved from its former fate. 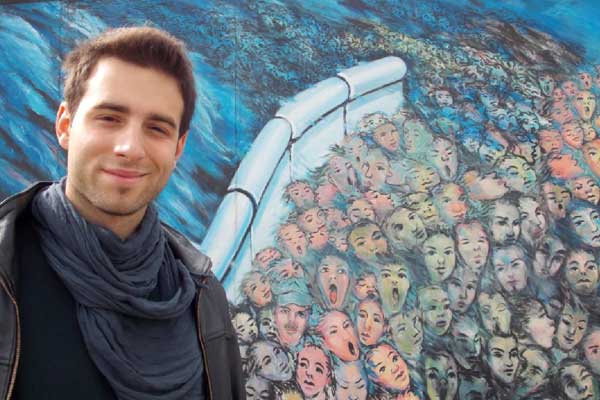 The former palace and it’s luscious garden, home to the Kendeffyne family in the early to mid-19th century, is, simply put, a place of great social and architectural turmoil. This central historical landmark has been tossed around between different private owners and the Romanian state (be it Communist or Democrat) ) for almost the entirety of its existence. Nevertheless, the greatest impression it has ever made on the public conscience of the city was during its functioning as a summer garden — , a tavern where everyone would meet after a hard day’s work and debate the most pressing issues of the day. During a 13- year slumber, the palace and its garden lay silent and seldom disturbed by human incursions. 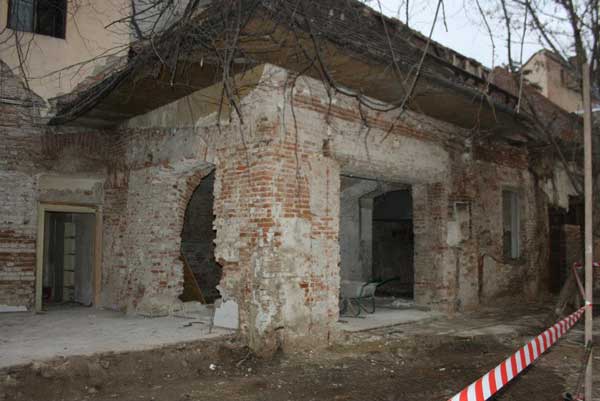 The garden of the building will be brought to life by the projects of the students who study landscaping.

As we , architecture, arts, and landscaping students , finally got to explore the house, we were overwhelmed by the myriad of different stories it could pin, the sheer number of “artiefacts”we found, ranging from clothes to books, construction plans, portraits, and even flags and furniture. This was entropy happening right under half a million noses in the middle of the city. It didn’t take us long to figure out what our general attitude toward the house should be. We would not be the ones to correct, to clean and refurbish that what others let disintegrate and perish. We would rather preserve and expose, enhance the subtle particularities of each individual chamber, and project in others what we felt when we first visited that room. At least one storey of our house would be an exhibit in itself. The garden got what some could call an archaeological treatment:None of the different additions to the original late baroque garden is to be removed, but kept, explained, and assumed as of equal importance. One expression describing the way we perceived the house and the garden and their many interlocking phases of existence stuck with us: “spatial and temporal scrapbook (collage)”. 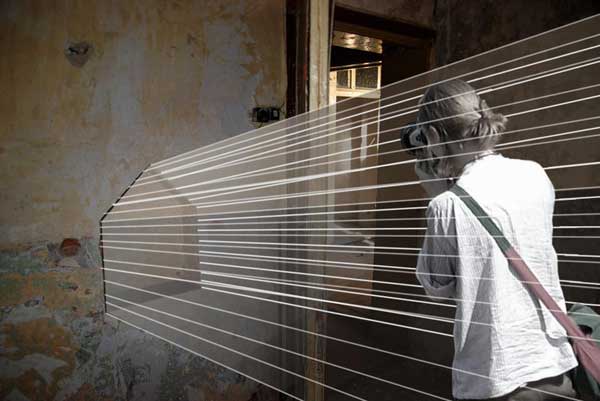 How to rekindle this flickering flame that Boema once was? Well, the same way you reverse entropy: by pumping energy back into the secluded system. In this case, the energy needed was firstly a human one. We decided that we would create a teaser event in March 2013, just to give people a taste of our project and its possibilities. This was to be accomplished by creating just part of the artistic installations, a few exhibitions mostly regarding our work there and the way the house is changing its shape around us, and as many activities as one can fit into a five hour interval – music, food and drinks, presentations, talks, and exploration. For the first time in the last 13 years, Boema would again be a home and not a house, a place and not a site. 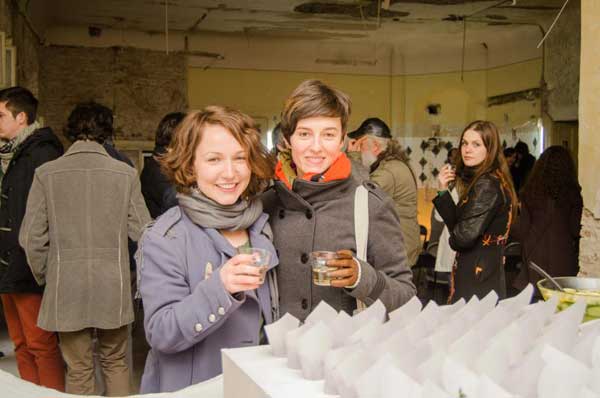 Life is injected back into Boema Garden after 13 long years.

The Scratched Room is where people were invited to leave their own mark on the house by drawing on the wall or scratching it with various objects. The Salon is where the bulk of the events happened; we had two concerts, a Swedish buffet, drinks, and an exhibit of the final installations of art proposed for the 15th of May. The Nail Room hosts a nail and light fixture installation, complete with a duct tape sculpture and huge Communist portraits, greeting the visitors in an almost Dada setting. The Rubble Room had a pile of rubble, the flesh and bones of the house and a wall with paper artiefacts. 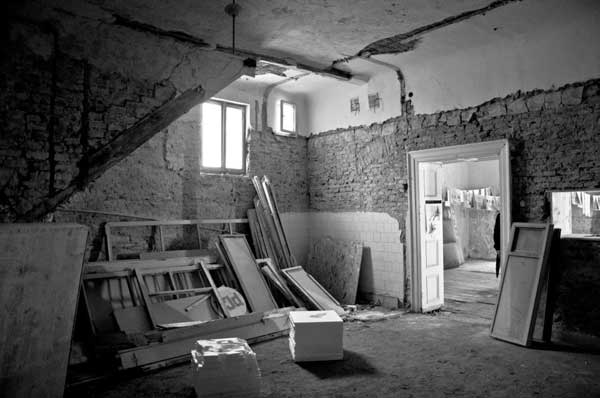 Plenty of room for potential

The Acoustic Room is the only room on the first floor that has a dome of any kind, and it was used for a musical performance by those from “CercIntreg” (“Full Circle”), in which people could participate in order to transmit messages via drumming and singing. In the “I Destroy You” Room, one of the art students, Filip Zan, proposed an installation/performance combo in which he would melt some polystyrene cubes with acetone in an effort to recreate the same process of entropy that led the house into its current state and then exhibit said cubes. The Door Room contains various doors and door frames used as background for an exhibit meant to document the recent works done to the house. 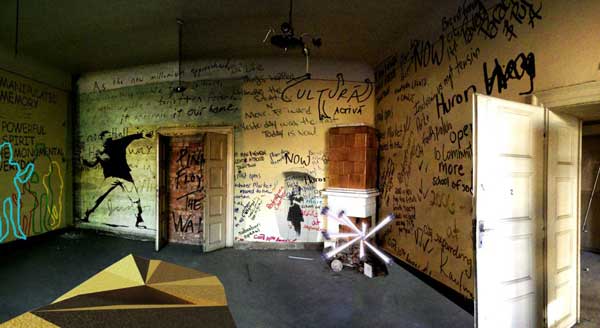 Leave your mark in “The Scratched Room”

The courtyard is witness to a flurry of installations, one of the most important being the “Vertical Garden”. This endeavour is special not just because of the size of the garden, but because it will be the first exterior vertical garden in Transylvania. Landscaping students will do most of the grunt work under intense supervision of experienced specialists. Other installations in the courtyard include a huge, sculptural lighting fixture, furniture made out of wooden pallets, and a temporary bar stage, all necessary to sustain the concerts that will take place here starting with our festival, Architecture Days 2013. 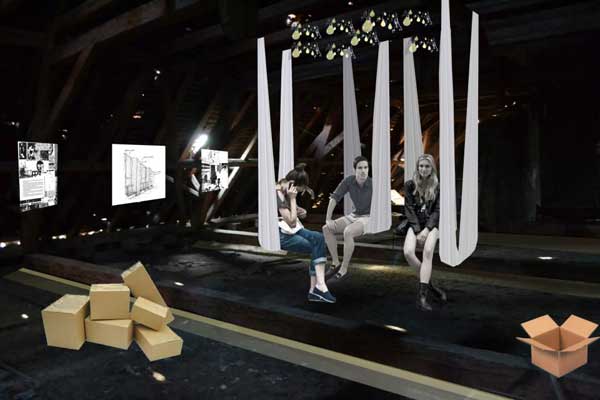 Hammocks and lighting set the stage for exhibiitions

Hopefully, it will attract a large enough number of visitors so that further similar projects will be easier to do and will gain the support of a larger community, city officials, and private investors. In other words, we hope this will be the first of many projects to help revitalize the city center by reclaiming it for the people.

Currently, our efforts have reawakened the owner’s interest, and he began work on the final restoration of the building and the garden. His plans include opening a restaurant and a tavern, while leaving enough space for cultural events in the attic and the courtyard. We regard this as a huge success, because it was the very purpose of our project to entice people enough to react and simply do something. 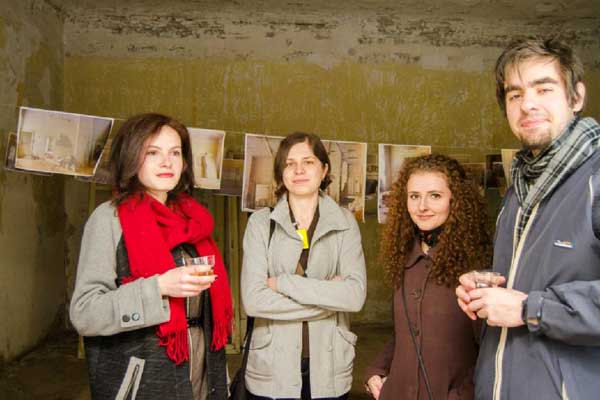 Alternative solutions can always lead to solving a seemingly closed problem, so as was the case here. More old buildings can be put to good use through innovative ideas and a bit of bold action. Architecture, landscape architecture, arts, and design students came together to implement this project for the 2013 Architecture Days event in Cluj-Napoca. Let’s hope we hear more about these small -scale-big -impact projects from the world architecture scape. Article produced by Oana Anghelache Enjoy what you’ve read! Support us and pick up one of our awesome T-shirts and hoodies today, Click the link