I proudly love walking around cities. If I can get there on foot, I will. I have thought for some time that it would be a fabulous side gig to just spend a huge chunk of time walking around a city and documenting the trip through pictures and blogging.

image of a busker in Leeds via Lydia Heard

As it turns out, someone is doing this! Her name is Lydia Heard and her blog called Citywalker is my new favorite blog. As an urban designer she has walked and studied many cities but currently resides in Seattle where she walks and documents the most. The best part is that she looks at city’s like I do, and like most of us do as designers. She discusses the details that we would find relevant and interesting in the public realm, green infrastructure, public transportion, architecture, and so much more…. She also has a jaw dropping 1826 pages of photos on flickr! 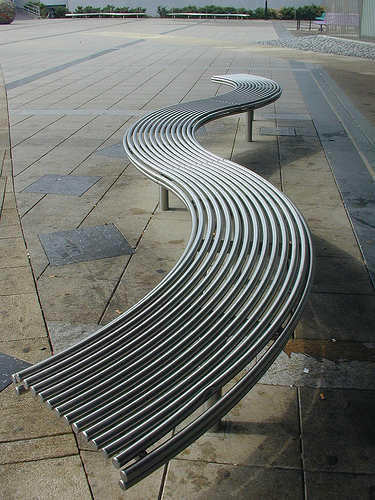 image of bench outside Peckam Library in London via Lydia Heard

On a bit of a side note, I find it really fascinating how differently people can see the same place. After traveling all around Europe with my husband, each of us with our own camera, I found that I had stumbled across an interesting little experiment that I didn’t even realize I was conducting. After looking through the photos I realized it was like looking through the eyes of person as they were seeing the world unfold around them…and how unbelievably different we saw what was in front of us. He might have snapped a photo of a great view from a lookout in Barcelona while my photo at the exact same time was of the stone construction of the wall keeping us from tumbling over the side. Or when we were in Rome and from a hill above the city, looking out towards Vatican City, my husband took a photo of the moon beginning to show just next to St. Peters Basilica while I was looking at the plaza below us that was setting up for the following days market. It’s definitely a good thing we both have a camera so there’s someone to balance out my photos of sidewalks and paving patterns when it comes to putting together photo albums for the family!