St. Jacques Ecological Park by Atelier des Paysages- Bruel Delmar. The prize winning project St. Jacques ecological park, located at the bottom of a valley in Saint Jacques de La Lande, Ille et Villaine northwestern France, provides the residents of its surrounding neighborhoods with a vibrant journey amid its natural and agricultural past and present.

The Team That Designed the Ecological Park

The park is an outcome of the collaborated efforts of the landscape architecture office Atelier des Paysages- Bruel Delmar, LM Communiquer for design and communication, and Michel Danais for environmental and ecological advice.

The Parisian landscape architects and urbanists Anne Sylvie Bruel and Christophe Delmar who had created Atelier des Paysages back in 1989, aim through their designs to answer to the problematics of a territory with an ecological agenda in mind; Something that is made tangible in the fact that several of their designed exterior spaces had been labeled as Ecoquartiers or ecological quarters. Themes and Main Concept The project’s main aim was to bring back the connection of the city of Rennes to the forested landscape of La Villaine. But the park adheres to not only one but many visions. For while the sought out physical continuity to the community played a vital role in the creation of the park, reconciling economic development with the preservation of the natural environment was an important goal as well.

A canal that leads water towards the park. Credit: Bruel & Delmar STJP

A ditch instead of water pipe. Credit: Bruel & Delmar-STJP

The participation of local residents in the design of the park is in addition a factor that provided the inhabitants of the neighborhood with a sense of ownership to the space, thus strengthening the ties of the people to the park. The Implementation The design was implemented in three phases between 2007 and 2013. The first one being in 2008, the second phase in 2010, and the completion of the project took place in 2013. The park has an open form and is located on the dividing line between neighborhoods.

Children going to the park & playing in the reeds. Credit: Bruel & Delmar STJP

Water, water everywhere… Water is a focal feature of the design and helps in forming the shape of the park and asserts its presence on all scales. The latter is applied by the designing of a lake aligned by oak trees and the creation of a reed bed providing phyto-purification of runoff water. A wide range of small constructions such as decks and bridges all help in defining and revealing this topographic and ecological creation. Related Articles:

Thoughts and Insights St. Jacques ecological park offers a dynamic of renaturalization giving the impression of being a wild place. It engages the inhabitants of the area in the discovery of nature, something which is sadly often lacking among urban dwellers. The smooth lines and simple hardscape features not only set the stage for vegetation to take over and speak for itself, but also remind of the importance of not harming nature with harsh built structures.

The wide open decks and fields also give room for users’ imagination. For while architects and landscape architects always create spaces to be inhabited or used, they sometimes fail to make them flexible and adaptable to the needs of people that evidently do not come in one shape and color. 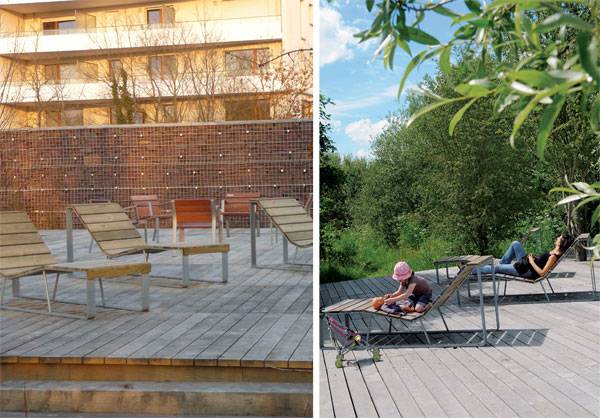 “St Jacques does not conform to the fixed image of a typical park, but aims to be a permanent laboratory for the protection and development of its ecosystems. This dimension, built on geography, history, the use of the land and the passing of time, gives this contemporary park its identity.” Atelier Des Paysages Bruel-Delmar. Recommended Reading: