The Beijing Sunken Gardens by Plasma Studio and Groundlab, Beijing, China. When I first saw pictures of the Beijing Sunken Gardens I could not quite get what those massive concrete plant beds were all about, which lead me to the designer’s website to get a better idea of the concept. My mind was blown away by the beautiful description by Plasma Studio of their own work, reflecting the elegance and mystery of classic Chinese garden design. The beauty of Beijing Sunken Gardens is not only in the project itself but also in the rich tradition that backs it up, which requires us to look back to try to understand a bit more of their culture. 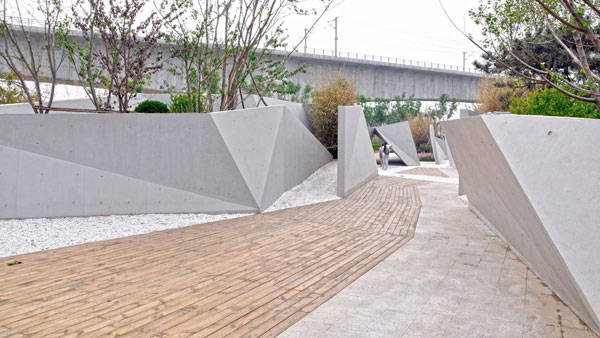 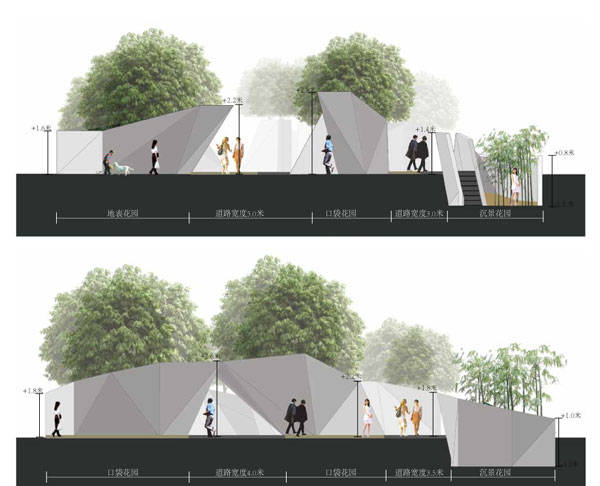 Emperor Wu’s elaborate style continued right up until the twelfth century, when Chinese gardens turned their focus on the idea of nature appreciation, hence reflecting the natural landscape. The design process mainly involved achieving harmony, with the belief that elegance would follow as a natural consequence.

The Designers of Beijing Sunken Gardens

Headed by Eva Castro, Chuan Wang and Holger Kehne, the project is a collaborative work of Plasma Studio and Groundlab. Plasma is an innovative architecture studio with quite an intriguing name: “plasma“, in physics, is the fourth state of matter – having no definite shape, it can be modeled and has the potential to become whatever creativity may determine. 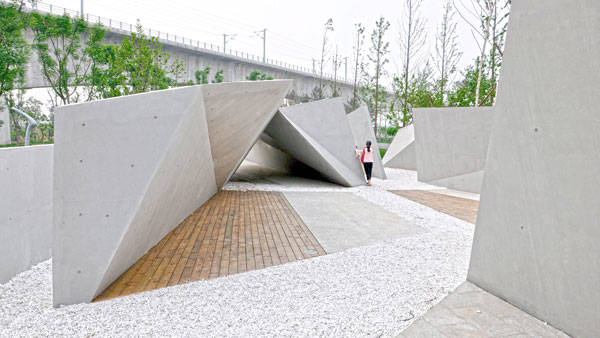 Based in London, Beijing and Bolzano, their design work has no scale boundaries: their projects range from furniture design to master plans. Groundlab is an international landscape architecture/urbanism studio with a multidisciplinary and innovative approach, based in San Francisco, Mexico City, Caracas, Santiago, Rio de Janeiro, London, Amman, Surat and Beijing. 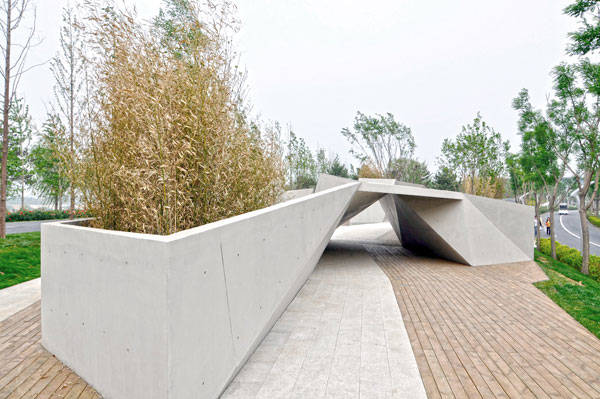 The Sunken Gardens Designed and built in 2012-2013, the concrete sunken gardens launch a new concept in public space. People are invited to directly interact with the elements to silently appreciate nature. Enclosed by secluded areas offered by the canyons and corridors, one can pass through the oversized pots (guided by the beautifully detailed paving) as water flows gently through rocks in the sea. Juxtaposing and long-distance views, skillfully planned by the designers, bring back the delight of classic Chinese gardens. Elements further down can be seen in contrast with the immediate near ones to create an interesting composition that tricks the sight. Distant vegetation and other concrete elements in the surroundings are also “borrowed from the scenery” to complement the arrangement. 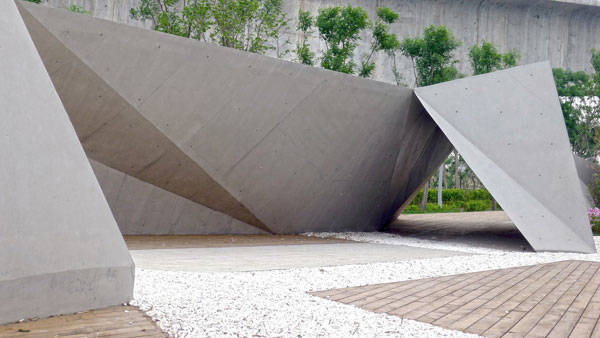 The massive tilted concrete gardens rise like ancient mountains, leading the visitors to slightly bend over as they pass under – almost akin to bowing as in a sign of reverence and respect. The artificial mountains in traditional gardens, if large enough, would often have paths leading the way up to their top. In this contemporary version, visitors can climb on the monoliths to fully experience their mass and also discover a different perspective. 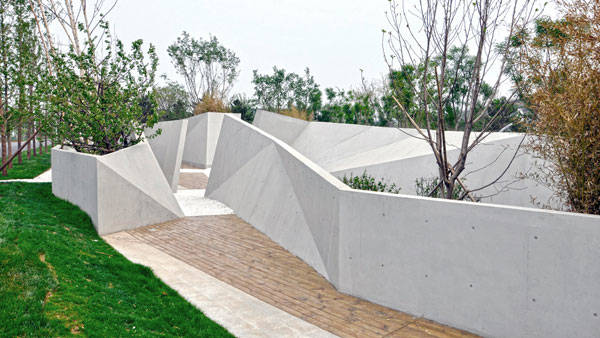 Following the existing scenery In the classic Chinese text on garden design, “The Craft of Gardens“, the author Ji Cheng states: “skill in landscape design is shown in the ability to ‘follow’ or ‘borrow from’ the existing scenery and lie of the land, and artistry is shown in the feeling of suitability created“. Perhaps the mystery of the massive concrete plant beds (that I could not understand at first) can be explained by the quote above. Perhaps oversized concrete structures prevail in today’s Beijing urban scenery, and this typology was “followed” by the landscape architecture proposed by the designers. Or perhaps not. Perhaps the intention is to be deliberately mysterious, and thus invoke the mystery of traditional Chinese garden design in the Sunken Gardens in Beijing. Recommended Reading: