A book review of Ecodesign for Cities and Suburbs, by Jonathan Barnett and Larry Beasley. In their new book, “Ecodesign for Cities and Suburbs”, co-authors Jonathan Barnett and Larry Beasley use real-world examples to show how ecodesign can be combined with generally accepted business practices and standard development regulations to create successful city planning designs. They prove that our built environment can be designed to adapt to a changing climate and to a rapidly expanding world population while also creating places that are more desirable for living and working

Ecodesign for Cities and Suburbs 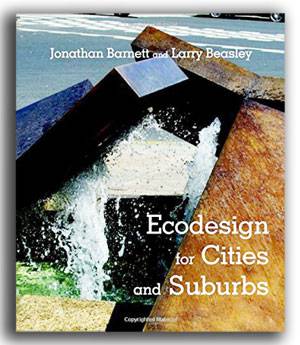 Front cover of Ecodesign for Cities and Suburbs by Jonathan Barnett

The book is comprised of six chapters, all of which are filled with illustrations that help to explain and back up the easy-to-follow text. Each chapter also contains real-world examples from cities and suburbs around the globe. The authors take the reader from Hammarby Sjöstad in Stockholm to False Creek North in Vancouver to Battery Park City in Manhattan to share examples that could potentially be adopted in any community. In the first chapter, “Ecodesign: Changing the Urban Growth Model,” the authors preface their entire argument with the notion that most cities become less satisfactory to live in as more people move into them, which in turn creates unsustainable stress for the whole planet. Here, they use the example of Vancouver to show how an improved growth model can actually arise from a simple idea, such as bringing people’s homes and the places they work closer together — known as “Vancouverism.” In Vancouver, neighborhoods are built around business centers, and everything is connected by an open-space system of parks and trails. Because of this, more than 60 percent of trips throught the city are made by nonmotorized means. The authors use the example of Vancouver to define the term “ecodesign”. To them, ecodesign is “a way of looking at cities and their hinterlands that integrates considerations of environmental soundness and resilience with human health and well-being.” They go on to explain that ecodesign “embraces an ethical tenet that in our settlements we hold responsibilities – not just for ourselves but also for our setting … and for all the people around us.” (page 7) Get it Here! 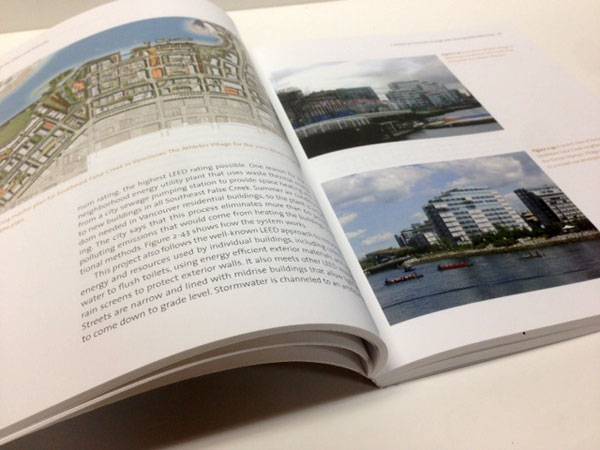 To achieve this idea of ecodesign, one must first understand the six axioms that comprise it: 1. Embrace and manage complexity 2. Make population and economic growth sustainable 3. Make all design processes interdisciplinary 4. Always require public involvement 5. Respect both the natural and the built context. 6. Draw on many design methods. Chapter two — “Adapting to Climate Change and Limiting Global Warming” — discusses ways to preserve and restore natural systems while adjusting and adapting to a changing climate. Here, the authors go into detail on three challenges they believe should be addressed immediately. The first challenge is adapting to climate change, the second is reducing the causes of global warming, and the third is creating prototypes for urban and environmental harmony. They point out that without the cooperation of the entire world’s nations, none of these challenges can truly be addressed and the negative effects of climate change will never be corrected. 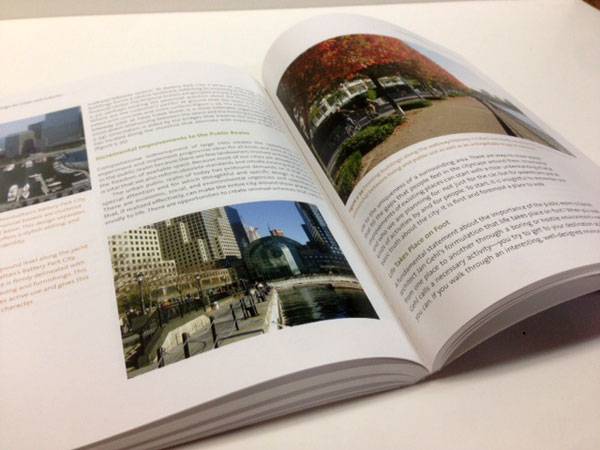 The following chapter — “Balancing Cars and Other Transportation” — looks at ways to minimize congestion on highways and at airports by adding transit solutions, such as Bus Rapid Transit and passenger rail, making it easier for people to walk and cycle on their commute and to make places more compact. This idea is known as balanced transportation, and it is a fundamental principle of ecodesign. This leads to the topic discussed in chapter four: “Making Cities More Livable and Environmentally Compatible”. The authors point out that people trying to solve very specific problems more than a century ago developed the regulations that are currently in use in the United States and Canada. This has resulted in an excess of regulations that, when combined, don’t really solve the whole problem. Instead, they have created places that are less than hospitable, such as streets that are wide enough for emergency vehicles but encourage high speeds and discourage pedestrians and cyclists. 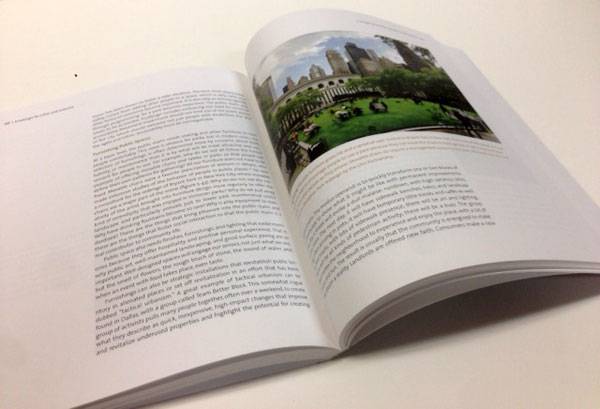 What is the solution? Barnett and Beasley believe new regulations that would instead relate development to nature and restore compact, walkable developments should be enacted. They would also like to see new regulations for compact, mixed-use urban centers and regulations to help people be comfortable in downtown housing while achieving social diversity. They believe one way to achieve this is to add more housing to urban neighborhoods that are already successful — an idea known as “in-fill”. Creating new neighborhoods on the urban fringe and around commercial strips will bring people closer to their jobs. Chapter five — “Designing and Managing the Public Realm” — starts looking at the details that make a community more inviting, such as parks, streets, waterfronts, and forgotten places like back lanes and freeway rights-of-way. The authors point to Paris, “where the boulevards, squares, and parks were rebuilt from the seventeenth through the nineteenth centuries to form a cohesive public open-space experience for the entire historic city.” (page 150) Get it Here! 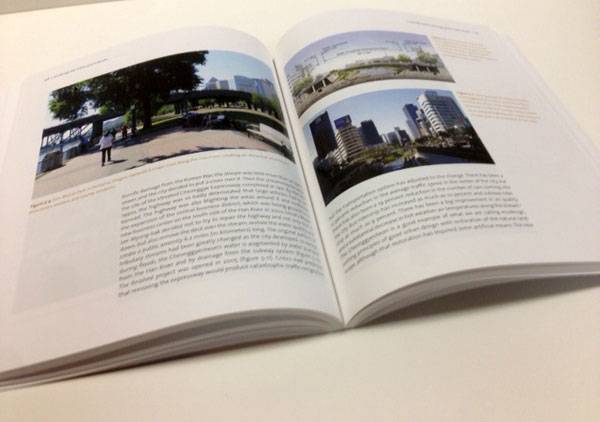 Cities For Inspiration Other cities that have created successful public realms are Copenhagen and New York City, both of which have made advances in open space and are viewed as efficient and easily accessible. Small city blocks, connectivity, multiuse streets, public spaces defined by buildings, and easy wayfinding are all components found in these places. Finally, the authors bring it all together in the final chapter, “Implementing Ecodesign”. The most important point they make is that cities are both public and private, and each citizen has a role in implementing the practices of ecodesign. Without public input and participation, governments aren’t as likely to seek change. So in the end, it is up to the citizenry to take the first step and ask for these changes. It is also up to the citizenry to make sure these changes are accepted and realized. What about you? What will you do to bring about change in the community where you live and work?

Pick up your copy of Ecodesign for Cities and Suburbs today!