HOSPER’s ecological landscape design “Park van Luna” Park of the Moon (Park van Luna) is a beautiful open area in Heerhugowaard, the Netherlands, where the residential development City of the Sun (Stad van de Zon) is located. Carefully designed over the years – from 1997 to 2003 – the landscape features a well-balanced integration between the dwellings, the recreational area, and the water elements. The sun and the water were key elements in the project – the water for its recreational facilities and careful management, and the sun that provides free and clean electric energy to the neighborhood. Financed collaboratively by the Heerhugowaard, Alkmaar, and Langedijk municipalities, the City of the Sun is an island surrounded by a 60-ha lake that separates the residential area from its surroundings. Its master plan was developed in 1992 by architect Ashok Bhalotra, although the last houses were completed fairly recently, in 2012. The neighborhood consists of 2,600 homes designed by the architecture firm KuiperCompagnons with a sustainable and energy-efficiency approach the company is renowned for. City of the Sun and Renewable Energy The houses are fitted with a total of 25,000 photovoltaic panels (solar energy); hence, the reason why the development is referred to as City of the Sun. It is actually the largest PV housing project in Europe, and it was the first carbon-neutral residential area on the continent. The project’s total investment was approximately €140 million; from this total, €25 million were invested just on the PV system alone. In addition, the electricity is also generated by three 2.3 megawatt wind turbines. Strategies to reduce energy consumption and use of renewable energy sources through low-carbon technologies is a relevant concern in sustainable development. The uncertainties regarding changes in climate that we are experiencing challenge the way contemporary cities and neighborhoods are planned nowadays – this is the so-called “climate planning” that combines a commitment to reduce greenhouse gas emission with a design that is climate-sensitive. Park of the Moon and Water Management 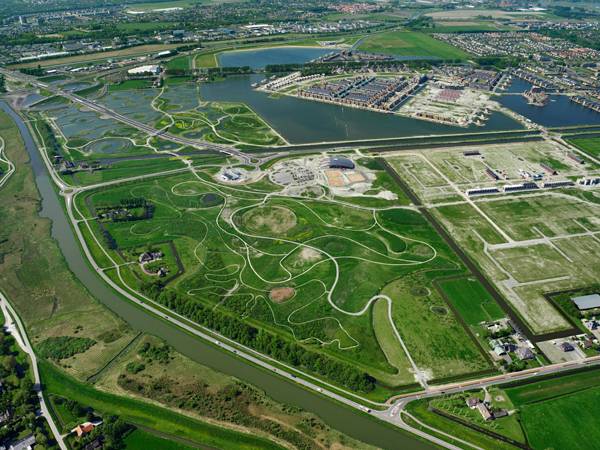 Water purification and preservation plays a big part in the park. Credit: HOSPER

Park of Luna is the recreational area of the City of the Sun, designed by HOSPER and DRFTWD Office associates. It comprises 177 ha of area, including 75 ha of open water dedicated to sports and activities. Hill down to the beach. Photo credit: Pieter Kers

The park offers several recreational facilities, such as a 1 km beach, a multifunctional sports center, an area for walking and cycling, and a labyrinth excavated in 2003 (the excess soil was used to construct hills in the park). As there is so much emphasis on water in this project, the treatment of this resource deserved a great deal of attention. The residents are invited to experience the process of water purification and preservation through structures that enable direct contact and interaction. These include a natural purification plant, a dephosphatizing pond, and a pumping station; besides, the system was also designed to store a great amount of water meant to be used during the summer months. See also: Copenhagen’s First Climate Resilient Neighborhood The improvement of water management is an essential adaptation measure to reduce floods, droughts, landslides, and extreme temperatures, which can be achieved by rainwater harvesting and storage, preservation of wetlands, and creation of natural buffers. The use of green and blue open spaces not only reduces the risk of natural disasters, it also promotes environmental awareness and provides recreational areas that encourage social interaction. Designing Today, Thinking of Tomorrow A set of different strategies is required in design to achieve sustainable development. Strategies such as mixed land uses, water management, passive solar energy, and clean energy generation should become part of the urban planning practice to include the physical features as well as the environmental and socio-cultural aspects.

Contemporary landscape architecture and urban planning drive us to design climate-sensitive cities and neighborhoods as we are facing changes in the climate that imply the risk of extreme weather events. Park of the Moon and City of the Sun are a great example of how different infrastructures (green area + water area + constructed area) must go together to create a well-balanced complex, such as a naturally resilient ecosystem. Other articles HOSPER have featured in: Private Estate Reveals State of The Art Underground Car Park Top 10 Imaginative Squares World Class Entry for Park Competition! Recommended reading: Design with Nature by Ian L. McHarg Article written by Julia Lucchese Featured image: Pieter Kers