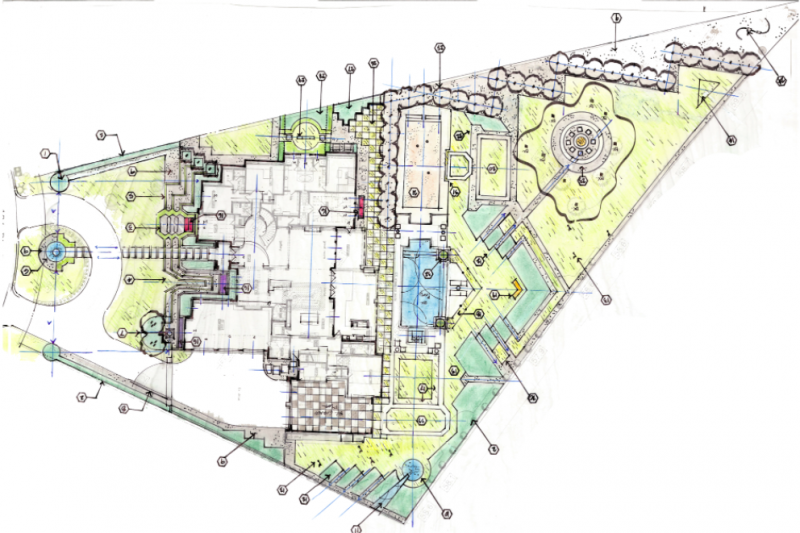 After being in the Landscape Architecture industry for over 40 years, I’ve learned that you can often find inspiration from places you least expect. Traditionally, I brainstorm and find ideas from looking at cutting-edge architecture, contemporary artists and nature, and I try to frequently think outside the box and see things from different points of view. One of my favorite sources of inspiration is Leonardo Da Vinci. He never looked at other artists’ work for inspiration, as he knew that he would never come up with something new if he was mimicking or creating a different version of what already existed. Even though I often try to push my own creativity, I’m still sometimes surprised by the places I can find new ideas. For one of my latest projects, something truly unique inspired the design process – my client’s exotic car, the Lamborghini Aventador SVJ Roadster. 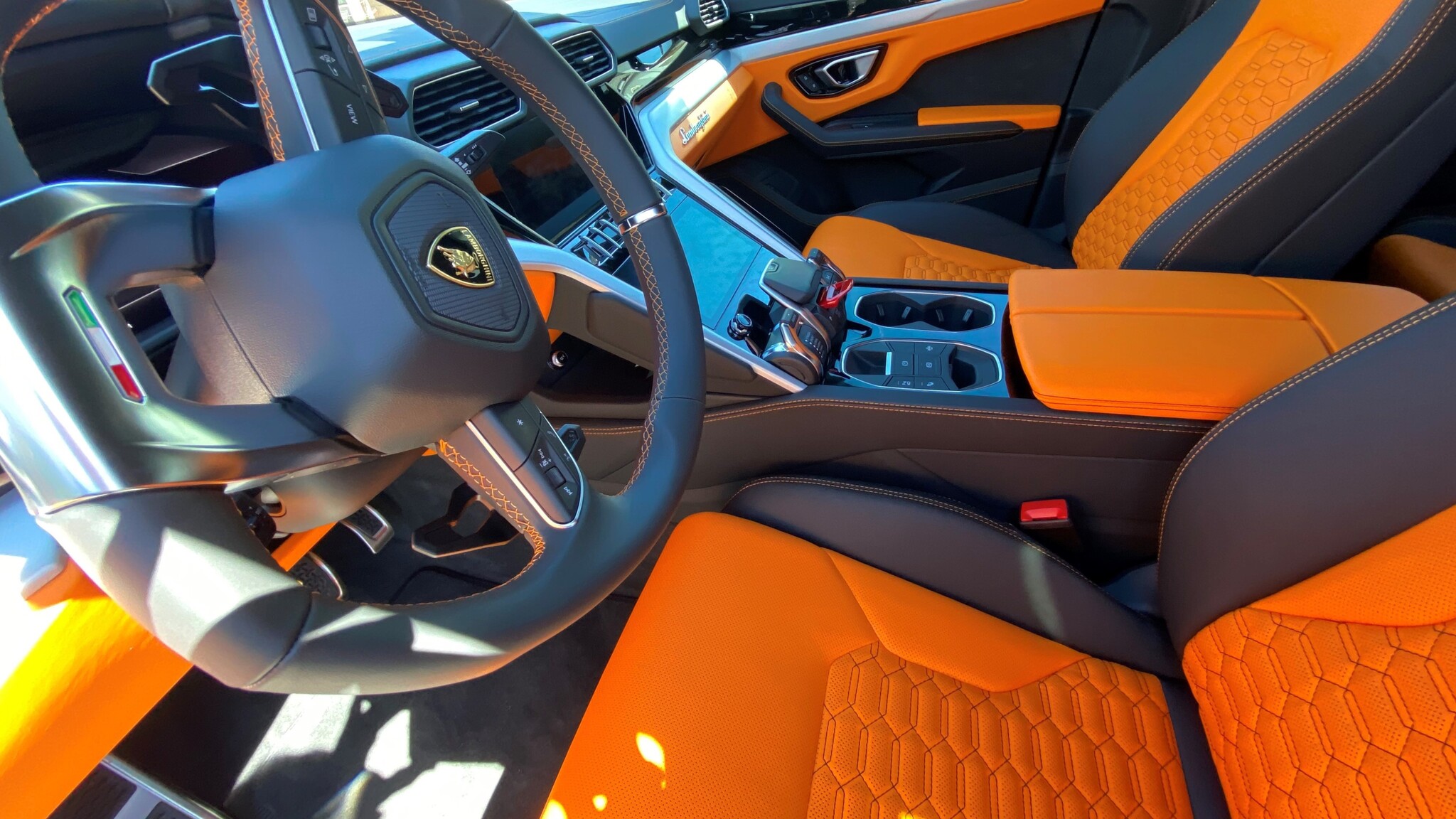 When designing a new project for a client, I try to learn everything I can about them – what inspires them, who they admire and their story. When I first met with this particular client, I wasn’t getting much feedback on his vision at first. After walking the property, we ended up at the garage, where I saw his stunning Lamborghini Aventador SVJ Roadster. Not long after his wife pulled up to the house in her striking, white Lamborghini Urus SUV. It was clear that these cars were something that the couple was passionate about. Once my client started walking me through the features of the car, I could see his excitement, and I was inspired by the shapes, patterns and overall design of the vehicle. I was enthralled with the details of this amazing piece of art – from the engine design and the sheer power of it when it was turned on, to the lines of the car and how the interior fabric is sewn with a distinct pattern. I immediately began to think of how I could translate the details of the car into this landscape architecture project.

The natural next step was to immerse myself in all things Lamborghini and all things connected. I wanted to know what inspired Ferruccio Lamborghini and learn about the brand’s DNA. I found out that Lamborghini drew inspiration from things like the ferocity of the bulls that Ferruccio would watch in Spanish bullfighting arenas and even fighter jets. To further visualize this concept and theme of movement that plays such a large role in the design of the Lamborghini, I visited a local museum where I drew inspiration from modern artists that have movement and patterning in their paintings, sculptures and works of arts. I wanted to create a garden space that would not only reflect the ideas of the architecture design of the home, including mirroring and patterning, but draw from the design of this beautiful vehicle as well and work them together. 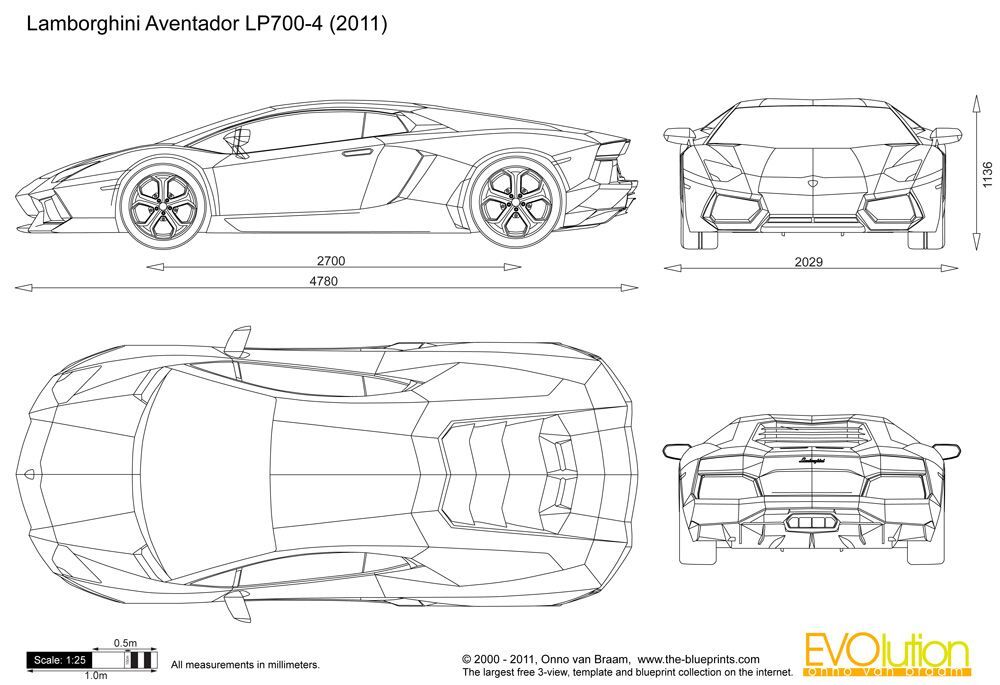 Bringing the project to fruition was a process that really stretched my creativity. We were able to successfully implement some really unique details that brought the vision to life. In the garden, we used water and glass to reflect the idea of movement, and recessed notching in the ground and rivulets in the lawn and gravel to translate the pattern of three from the car’s design and the architecture. The car’s grill is adorned with the classic Lamborghini, horizontal “moving” Y on front, and we used that as inspiration for the auto gate. We also noted how the engine valve covers had concentric lines of three, and groupings of three were implemented in the garden with concentric lines and rivulet lawn design. The brake caliper also matched the stitching on the interior fabric – the recognizable Lamborghini orange, so we added pops of color at specific points of the garden with a custom designed bench. In the garage, the client also has the floors covered in the classic, black and white checkerboard pattern. From that, we mimicked the pattern in the garden with alternating lawn and paver squares emanating from the garage source. Ultimately the entire project came together beautifully. It was such a fun one for our team, and we all walked away thinking of the unusual places we might be able to pull inspiration from for future projects.

Cars are something I’ve always been fascinated by. As a child I would build model cars, and as an adult I study them often. I’ve even rebuilt a 1983 944 Porsche, but I never thought about how this hobby could lend so much inspiration to one of my designs. I always encourage my team to take their passions and look at them from a new perspective – think about how you can draw ideas from the things that bring you joy. Getting out of your comfort zone, having new experiences and being around individuals who inspire are the ultimate ways to spark creativity. The more experiences you have, the more innovative you’ll be, and you might be surprised at the unlikely places that you find incredible inspiration.

Lanson Jones
A native Houstonian, Lanson attended Texas A&M where he obtained his degree in landscape architecture. Lanson served as the VP of Design at McDugald Steele for more than 14 years where he oversaw 50+ award-winning projects. Lanson launched Lanson B. Jones & Company, in 1994 where he could focus all of his design efforts on The Modern European Scaled Garden philosophy. Lanson B. Jones & Co. has been a fixture of Houstonians’ commercial and residential gardens since Lanson first opened the firm 26 years ago. The guiding motto “great design we all love” shapes the relationship-focused, yet design-centered process. The team pays close attention to the client’s vision and combines essential design philosophy to transform homes. The highly-skilled Landscape Architecture team works extensively to create extraordinary, artful designs for each project. For more information, please call 713.667.0709 or visit www.lansonbjones.com.