Aspire Public Art Lighting Project by Warren Langley Public art is an essential ingredient in creating a city’s built environment. It can often be inspirational and joyous — or sometimes just downright annoying and painful to look at. Regardless, public art should make us stop, or at least slow down, and take in our surroundings. But most importantly, the pieces should make us think. Public art can provide a design narrative and promote a range of educational, environmental, and social messages that would otherwise go unnoticed by the visually inept. Best of all, it’s free to view! No tickets, no queuing, and no screaming kids (not as many, anyway). Sydney’s public art scene is a bit of a mixed bag, with its sometimes-dire installations attracting all kinds of criticism. One permanent artwork that has managed to dodge most of the aforementioned criticism is a glowing, golden forest of trees dubbed “Aspire”. What’s it about? 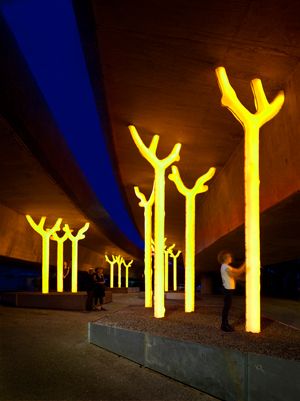 The project is the result of a collaborative community art project 10 years in the making, with Australian artist Warren Langley commissioned to conceive the final design. Langley has more than 30 years’ experience in public artworks and is renowned worldwide for his light and landscape installations. With light as the principle material, Langley’s glowing forest is constructed from high-density polyethylene, with economic and ecological sustainability being considered in the selection of materials. Sensitivity to the nuance of site is increasingly valued in today’s world, and Aspire adheres to that appropriateness of place. The design references the community uprising of a nearby street, which resulted in the preservation of local housing that was to have been demolished for a highway. So, despite being visually enticing, what purpose do these trees serve? It’s common knowledge that highway underpasses aren’t the most vibrant sites to behold, so this lambent display attempts to strengthen the pedestrian link underneath the highway overpass that connects two suburbs, thus transforming a dark and unattractive area into a glowing public gallery. At a glance, the trees appear to actually be holding up the dominating piece of infrastructure. They can be appreciated at close quarters by pedestrians and from afar by passing traffic. 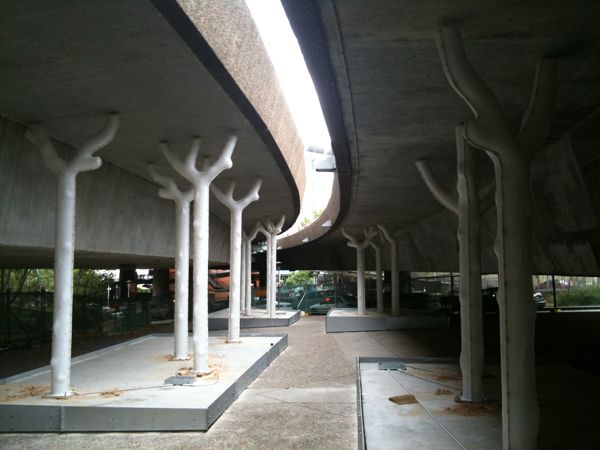 My take on the matter I strongly advocate the use of lighting to reduce the risk of being out at night; after all, bright lights make us feel safer. But around the world, there is an enormous amount of unnecessary overuse of light at night. It’s a basic evolutionary fact that we humans are diurnal creatures – meaning our eyes have adapted to living in the sun’s light. Light pollution and its damaging effects have only recently been fully realized by scientists. Largely the result of poorly designed lighting, light pollution allows artificial light to shine outward and upward into the sky, where it’s not wanted, instead of focusing it downward, where it is. Various cities in Europe and America have introduced programs that turn off street lights for at least part of the night – with Berlin and Copenhagen already having much lower levels of light than many of their counterparts. With your city potentially calling “lights out” at night in the near future, permanent artworks like Aspire are figuratively — and literally — a shining light. 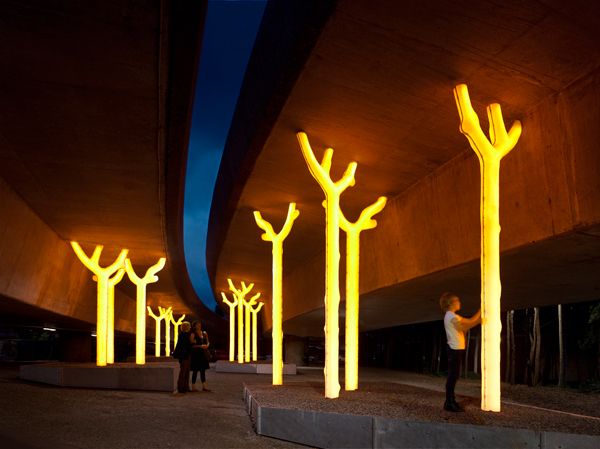 While personal safety has been the usual justification for copious lighting at night, research indicates that there are mixed opinions. Admittedly, I don’t believe that one can manufacture safe urban amenity on a site by simply installing public art, but as stated earlier, I think what really matters here is the feeling of safety induced by well-designed lighting. Experienced and perceived safety is crucial if we hope to have people embrace city space. Artworks that engage with the community provide a great sense of place and encourage ownership from residents and visitors alike. Public art is all around; sometimes it’s just a matter of knowing where to look. It’s not exactly a great look to be loitering beneath highway overpasses, but with sustainable lighting installations such as Aspire, it’s accepted – and you won’t be labeled a creep. Hopefully. For more outstanding art projects by Warren Langley check out his website Article written by Paul McAtomney Published in Blog