Waterfront Landscape Park of Aiyi River, by BLVD International, in Yinchuan, Ningxia Region, China. China is currently experiencing the world’s biggest boom in landscape architecture. Investing billions of dollars in environmental projects and public spaces, China is not only transforming its landscape, but its global image, as well. Waterfront areas are key to China’s redevelopment. Historically, water has been important as a tool for the country’s agricultural and industrial development. Rerouted for irrigation, reclaimed as agricultural land, and heavily polluted by industry, the conditions of China’s waterways have reached a critical state. As a result, China is making huge efforts to remediate, protect, and transform its relationship with water. 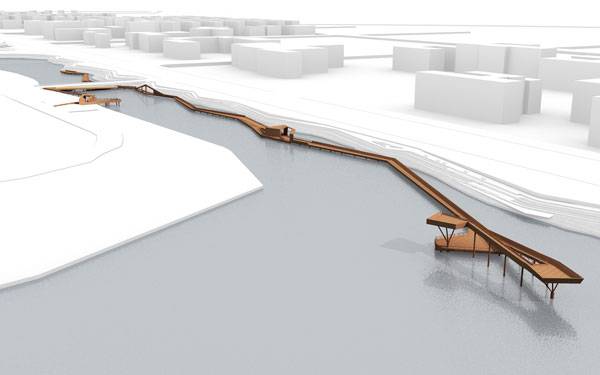 Designed by BLVD International and built in 2013, the Aiyi River Landscape Park is just one of the hundreds of recent projects in China that are transforming urban waterways and reconnecting people with nature. The 192,000-square-meter (approximately 50-acre) river park is located in the city of Yinchuan in the region of Ningxia. The River represents an important axis in Northwestern China and connects many major cities. 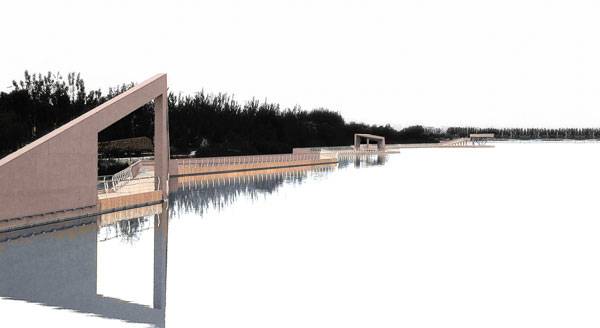 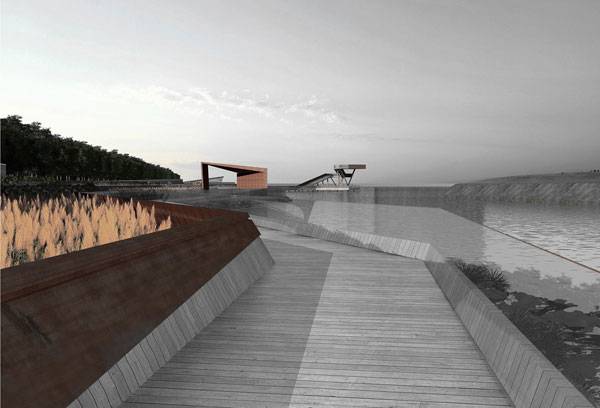 Ningxia’s arid, desert-like climate makes the region particularly reliant on the river for its economic and agricultural prosperity. Water plays an important role in day-to-day life, and the protection of waterways is essential to economic security. Related Articles:

Located adjacently to a recently redeveloped area of the city, the park consists of a network of boardwalks, bridges, and viewpoints that offer opportunities for locals to explore the previously inaccessible waterfront area. 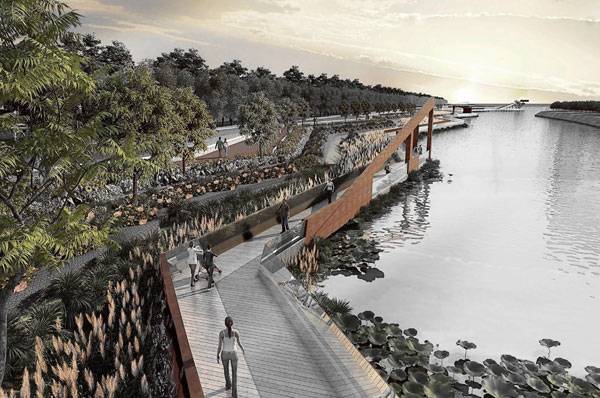 BLVD International: In Pursuit of Perfection BLVD International is well known for its work in interior design and architecture, as well as in landscape design, specializing in waterfront design and redevelopment. BLVD states that its philosophy is the pursuit of perfection in design: a careful balancing act among art, science, and nature. BLVD focuses on creating spaces where man and nature can coexist in complete harmony. The firm has a distinct design esthetic, characterized by abstract, minimalist, and geometric forms, which has helped it to create a portfolio of unique and memorable projects.

As Yinchuan has become increasingly urbanized, many locals have lost touch with nature. BLVD’s primary design objective in this project was to reconnect people with the river. 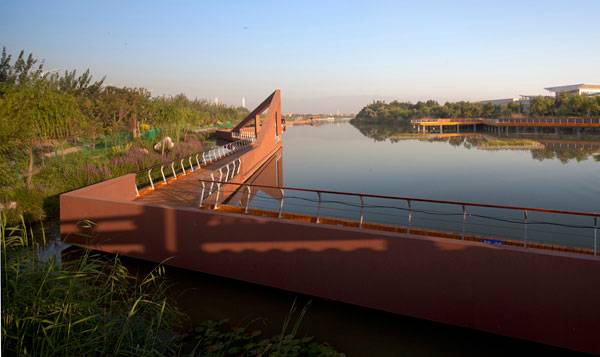 The river’s state prior to redevelopment was appalling. The river was inaccessible and polluted. Little thought had been put into the planning, management, or conservation of the river. In response, BLVD developed a snaking, zigzagging pathway system that opens up the riverfront to people. The design breaks up the hard edges of city and waterfront, decreasing both the physical and psychological distance between the city and the water. Now, for the first time in decades, locals have access to the river. 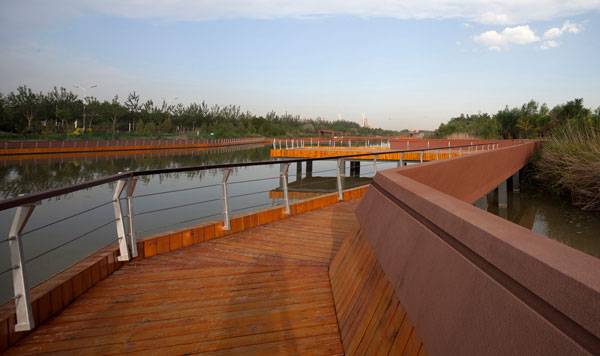 Ecological Redevelopment: Preserving and Protecting the River Growth and Urbanization in Yinchuan have made the protection and improvement of the waterfront area critical. BLVD’s design attempts to respond to this need to conserve the riverfront environment and to support its ecological recovery. The use of elevated pathways and lookouts minimizes human impact on the site while allowing natural succession and ecological recovery to occur. 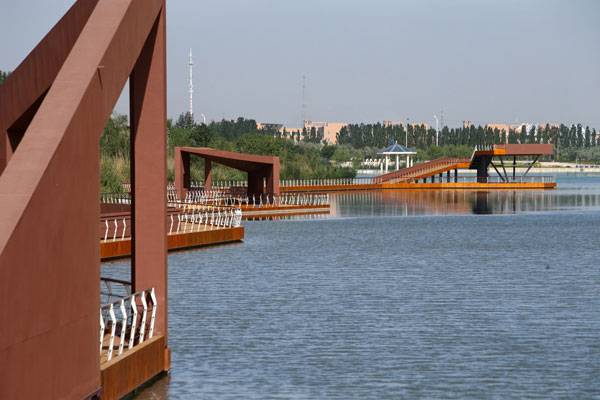 The design also strives to showcase the region’s natural landscape, by highlighting rather than competing with these natural features. The network of pathways and lookouts creates a unique series of views, highlighting the local landscape of rivers and mountains. 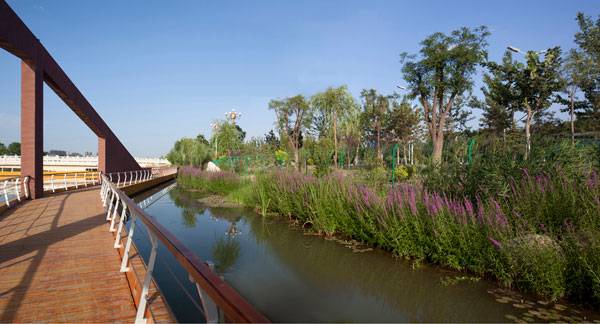 Finally, by allowing locals to explore and experience the riverfront, the design strives to foster a renewed appreciation and understanding of the natural environment. Cultural Redevelopment: Creating a Cultural Landmark BLVD hoped to create a distinct and memorable landmark for the city of Yinchuan. It was also necessary to integrate the site with the city’s redeveloped areas while still remaining true to the region’s heritage. 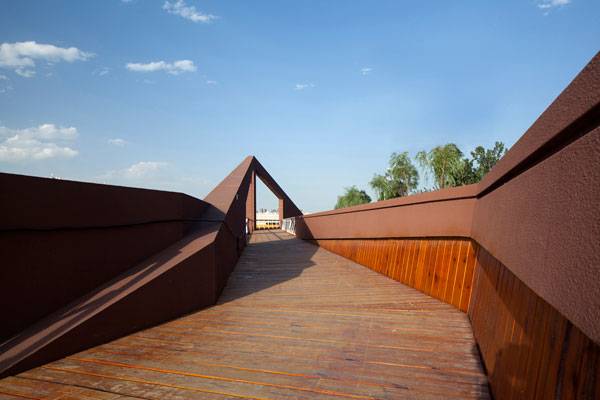 BLVD used the site as an opportunity to showcase the best of the region, describing the design as an abstraction of local culture, history, and tradition. Architectural elements, colors, and forms all take cues from the city’s and the region’s physical character and cultural traditions. Even the pattern of pathways is intended to mimic the rhythmic movement of water, the lapping of waves against the shores. 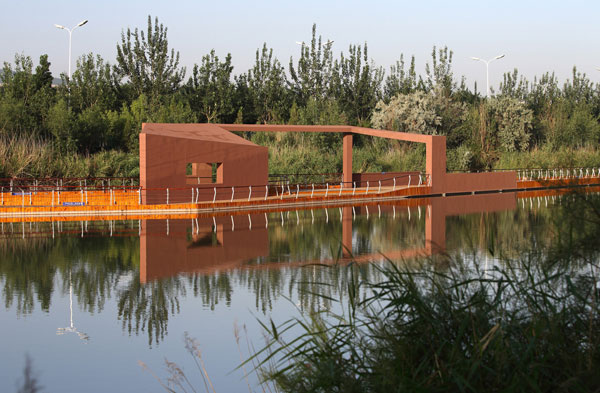 The careful sequencing of space through pathways and viewpoints creates a unique experience of the river, one that was never before possible, while still remaining relevant to the past, present, and future of the city. Is China’s Relationship to Environment Transforming? BLVD international hoped that Aiyi River Landscape Park would not only create a landmark in Yinchuan, but also reconnect locals with the river. The focus is not only on a physical, environmental transformation of the waterfront, but also on a transformation of people’s relationship with their physical environment. 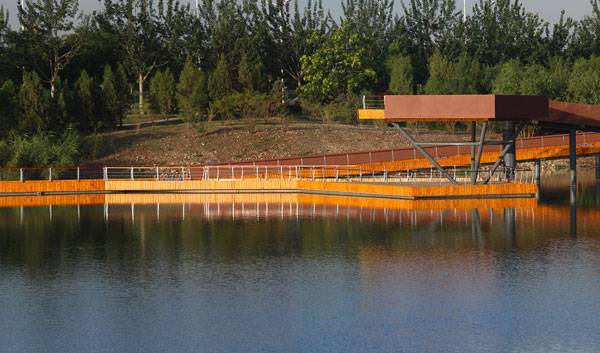 It’s difficult to measure exactly how the Chinese people’s relationship with the environment is changing, but China’s massive investments in ecological conservation projects seems to suggest that a change is indeed occurring and that China will continue to prove itself as a leader in environmental design. Recommended Reading: