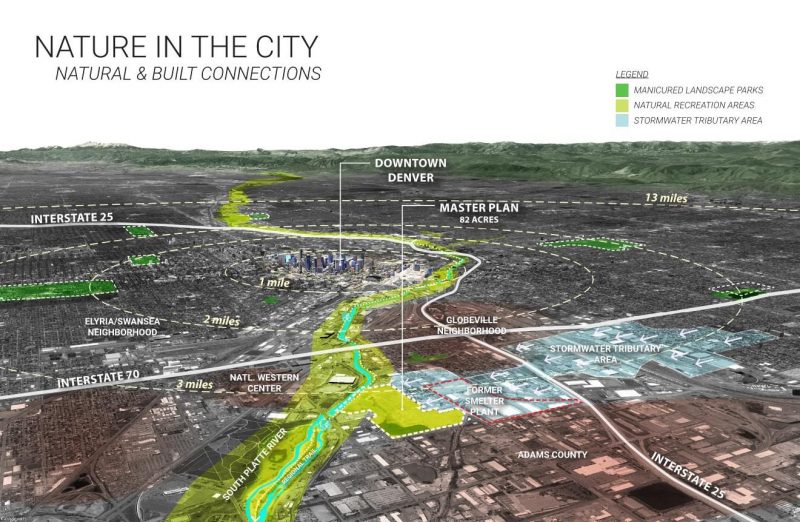 Residents of Globeville, a neighborhood in north Denver, have limited access to natural areas and open space – factors that impact social equity, along with mental and physical well-being. The neighborhood is zoned urban industrial and is littered with a recycling plant, an armory, and scrap yards. It was home to the Globe Asarco Plant, a high-purity metals (cadmium, arsenic, lead, and zinc) refining facility, awarded Superfund status in 1993. An exciting 80-acre park project is slated to change the status quo. Beyond designing a park, Denver Parks and Recreation and Denver Public Works, along with lead design firm Dig Studio, undertook an in-depth, year-long community engagement process designed to build social capital alongside the wealth of new green space.

The Globeville community was long neglected and underserved with limited safe access to parks, trails, and open space; despite 80-acres of city-owned land within one-mile of most residents (see figure 1). The ‘hidden’ park, formally, Northside Park, was unsafe and disconnected from neighborhood access. The busy South Platte River Trail skirts the park, yet despite the thousands of bicyclists and pedestrians who pass by each year, the park remained unknown and isolated. Three additional, connected City and County of Denver owned land parcels lay vacant or abandoned. In 2017, through a joint effort between the City and County of Denver, North Denver Cornerstone Collaborative, and the Dig Studio team, community engagement and master planning efforts began. 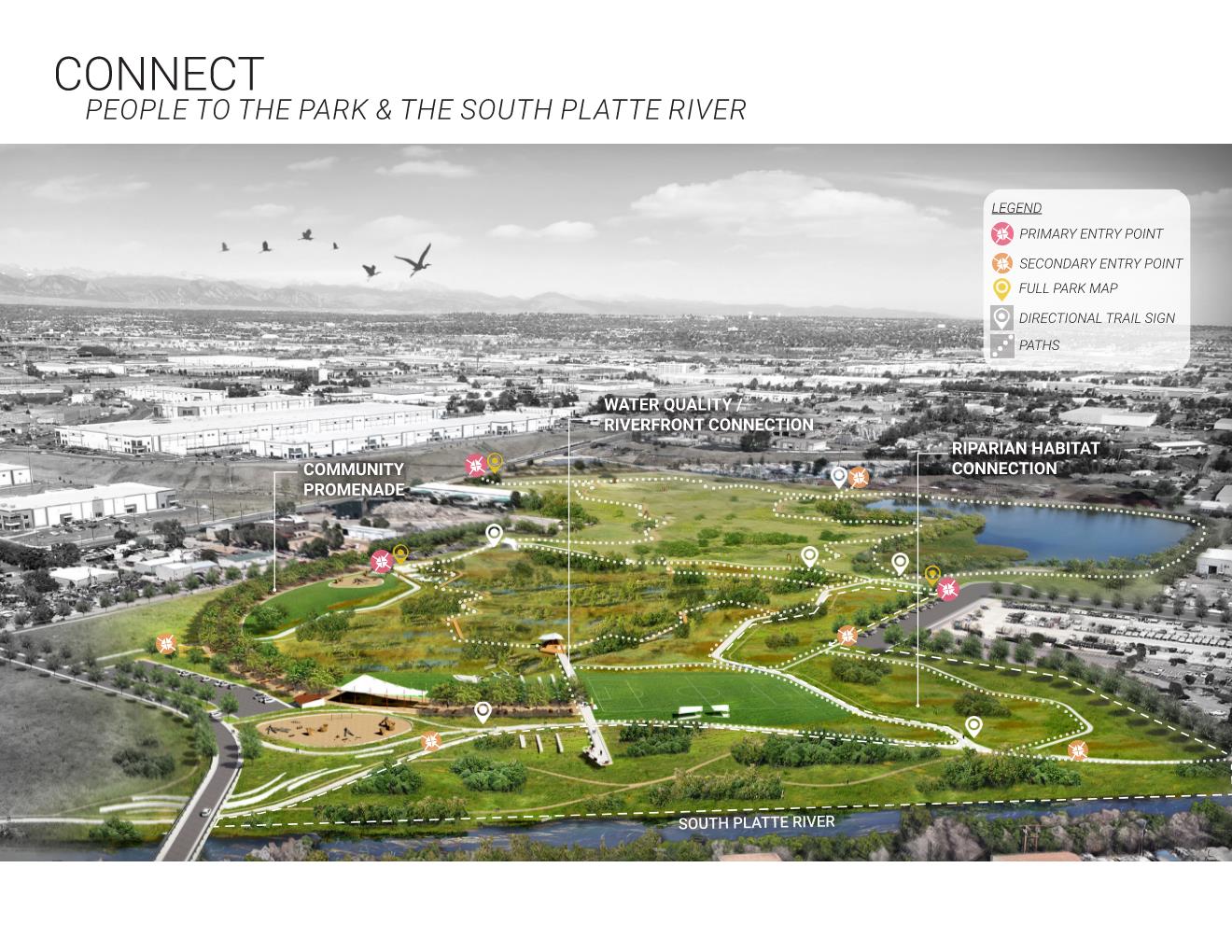 The community was fatigued with public participation after the Asarco cleanup efforts and neighborhood plans, but it quickly became apparent that this neighborhood had immense social capital upon which a successful park might be realized. The collaborative team began an in-depth public engagement process through which we believed the park had the highest chance of success. This investment in the natural capital, and valuable ecosystems apparent on the site, was in turn an investment in the social capital of the neighborhood. 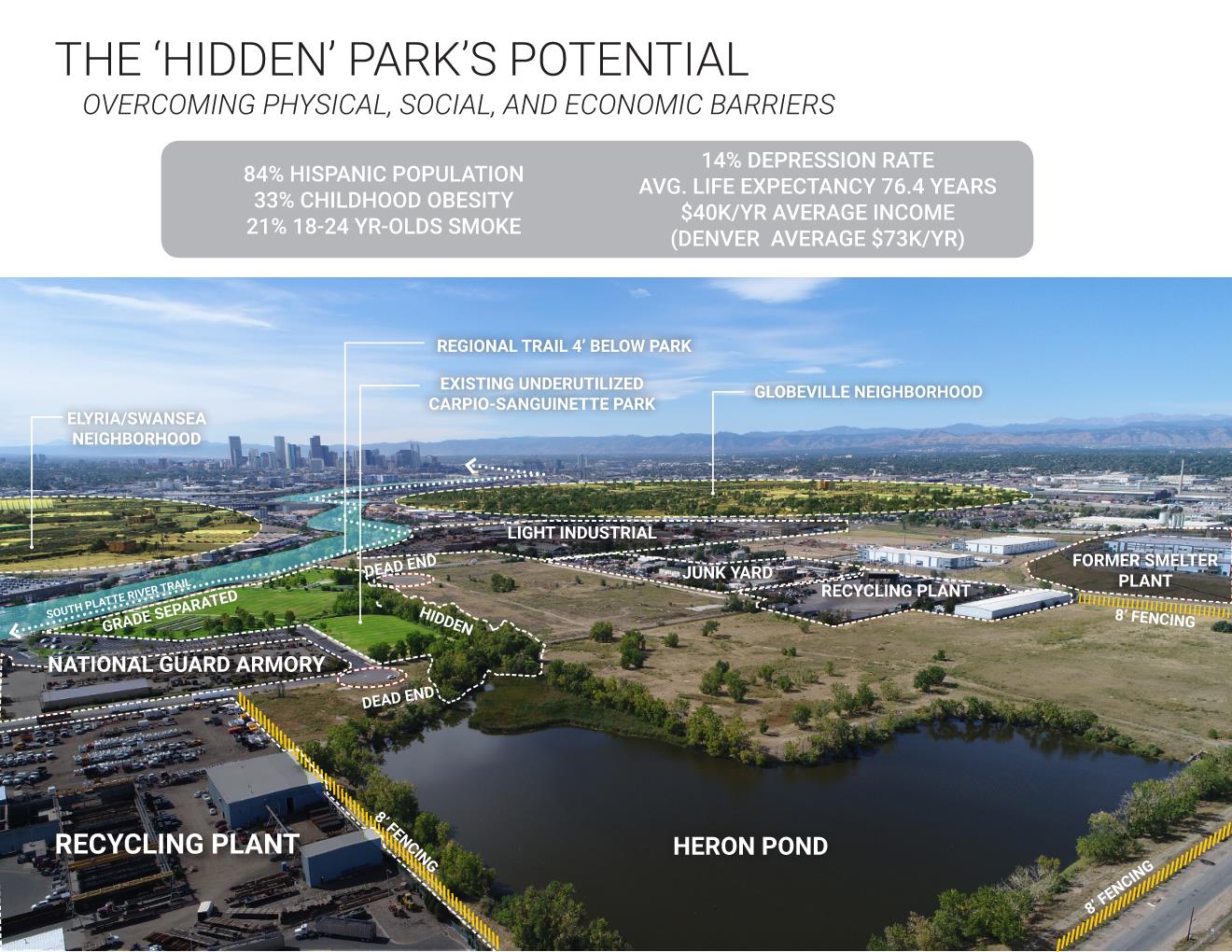 Figure 3: Barriers to the park from the Globeville and Elyria Swansea Neighborhoods. Credit Dig Studio.

Carpio-Sanguinette Park is intended to provide access to open space and nature for residents of the north Denver neighborhoods. A regional water quality basin will be integrated into the park and will treat a 650-acre watershed, which drains into the South Platte River. The park has been home to vandalism, unlawful activity, and dumping. Given these grand programming visions paired with such challenging existing conditions, community buy-in and fostering community stewardship was essential to re-vision the open space and how the community can engage with the natural environment in their own backyard. The design team promoted a series of community outreach and engagement events that provided the opportunity for the community to provide input on the park amenities and open space design. On-site events involving food, learning activities, and games, along with providing information available in English and Spanish, generated active participation. Community desires for the future park (along with requests for play and community gathering spaces) included preservation of natural areas, places for adults to exercise, and educational components, all of which are included in the current design of the park.

Modifying the way people perceive and/or use­ new or improved park landscapes happens organically and over time. Although the construction of the park is not yet underway, the design team can initiate programming in order to establish a user base and build on the social capital that already exists in this community. Furthermore, programming in parks increases usership by 48% and physical activity by 37% (particularly in numbers of teen females and seniors, both underrepresented in park landscapes).

In order to maintain momentum generated during the master planning phase, Denver Parks and Recreation (assisted by Dig Studio, Biohabitats, and The Butterfly Pavilion) launched a ‘BioBlitz’ event as part of the National Recreation and Parks Association (NRPA) June Pollinator Awareness month. The ‘Bioblitz’ event encouraged people to engage with the open space, find, observe, and identify pollinators using the iNaturalist interactive smartphone app. This consequently provided the opportunity for residents to learn, discover and contribute to a larger body of research on pollinators and their habitats.

Figure 3: Participants of all ages observed, identified, and recorded their findings through the iNaturalist app, contributing to a larger body of research. Credit Dig Studio.

The ‘Parks for Pollinators Bioblitz’ event collected 84 observations with 49 different species by 16 observers, which included 25 pollinators of 15 unique species. Pollinator species recorded included: Monarch caterpillars (Danaus plexippus), a Western Tiger Swallowtail (Papilio rutulus), Western Honey Bees (Apis mellifera), Hunt’s Bumble Bees (Bombus huntii), and Seven-spotted Lady Beetles (Coccinella septempunctata).  The real star of the show was the Showy Milkweed (Asclepias speciosa) where participants observed seven different species of pollinators including Danaus plexippus in its caterpillar form. In 2014, the U.S. Fish and Wildlife Service petitioned to have Monarchs listed on the Endangered Species Act (a decision is pending for December 2020). This observation, along with so many other species present on Asclepias speciose, highlight the importance of this plant for pollinator habitat. 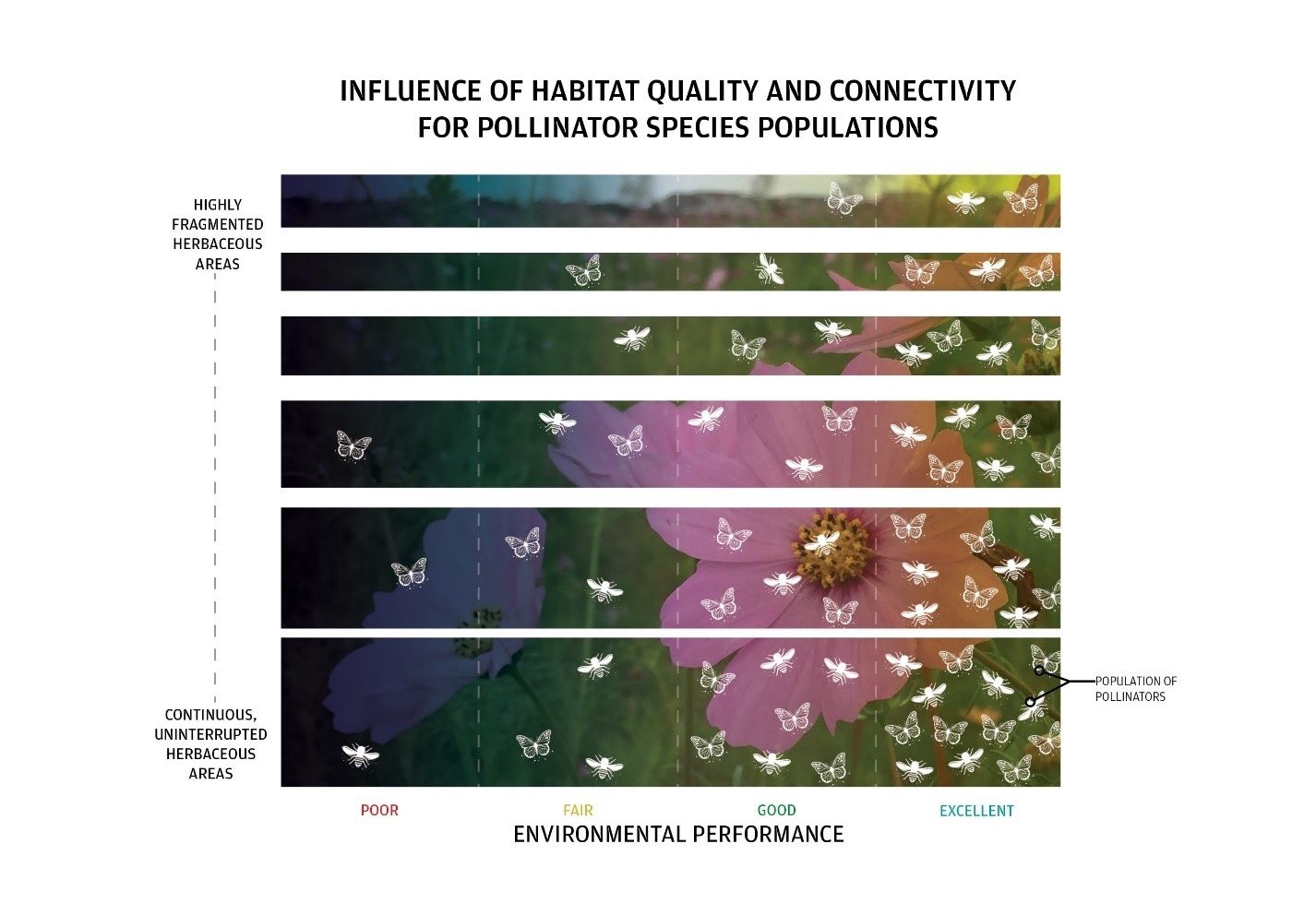 Dig Studio and Denver Parks and Recreation took the opportunity to set up stations presenting information on the proposed park design to collect community feedback (figure 5). Community members heard about the event through a flyer at local recreation centers, Facebook, neighborhood organization e-mails, and the Denver Parks and Recreation website. In order to facilitate interaction, Dig Studio created a series of site-specific questions aimed at various age groups to spark conversation about the future park and the importance of pollinator habitats. Figure 5: Community members from the surrounding neighborhood came out to participate in the Bioblitz and learn about the proposed park design. Photo Credit: Dig Studio.

The awareness and support for pollinators at Carpio-Sanguinette does not end after the Bioblitz event. The park design (currently at 60% construction documentation) is dedicated to promoting and increasing pollinator habitat, awareness, and protection. This will be achieved through pollinator gardens, bee and bat boxes, the preservation of an existing natural area, wetland bird habitat improvements, interpretive signage, and a Painted Lady (Vanessa cardui) custom butterfly themed playground (figure 8). Dig Studio, together with Biohabitats, will design and specify each of these areas with plants that extend pollinator habitat, including Asclepias speciosa and other plants native to the Front Range area. Figure 7: A new connection to the South Platte trail and access to the riverfront, complete with pollinator habitat and places for people to pause and enjoy the open space. Credit Dig Studio. As the project progresses, the team will continue to host programmed events aimed at engaging the community and building on existing social capital. Promoting positive uses and experiences of the park encourages stewardship, ownership, and continued community interaction. The Bioblitz is just one example of how programming brings people to parks and promotes active lifestyles, learning, and participation.

Design elements provide access to bring passersby into the park. Simply creating new access points for pedestrians and bicyclists and adding signage on the South Platter River Trail encourages users to move through the edge of the park, announcing and celebrating its presence as a destination on the South Platte River Trail. Once built, the park is intended to serve as a catalyst for community stewardship of the site, leadership opportunities, and positive events that bolster social capital and improve social equity through access to open space and nature rich areas in the North Denver neighborhoods. The City is exploring partnerships with like-minded organizations to coordinate with adjacent properties and neighboring Adams County projects to connect neighborhoods to the park through a new bridge and sidewalk improvements.

Lastly, preserving the area as a pollinator paradise (and hosting more events like the Bioblitz) is important, because after all, as one six-year old participant remarked, “This is a great place to look for bugs.”

Gretchen Wilson
Dig Studio is a Landscape Architecture, Planning and Urban Design firm with offices in Denver CO and Phoenix AZ. Gretchen Wilson is a Principal and Partner in the firm and is Principal-in-Charge of the Heron Pond / Carpio Sanguinette Park project. it’s humanature.