Soil is capable of carrying immense loads, supporting plant growth needed for urban environments and food security, sequestering CO2, mitigating stormwater runoff, and is home to billions of organisms and biological processes. Despite how incredible this natural resource is, soil is often an overlooked feature of our landscape. Its care and preservation are rarely considered in the development process, however its health is extremely important. During Episode 6 of Remarkable Objects, we learn about this ‘undiscovered country’ right below our feet from Jonathan Russell-Anelli, a pedologist and faculty member at Cornell University.

Soil is the medium on which much of our infrastructure is built. However, treating it as a foundation for infrastructure can mean sacrificing its other important properties. The disturbance and compaction of soil during construction and other human activity disrupts the ability for soil to perform two of its main functions: support plant life and absorb stormwater runoff. As Jonathan remarks, “At this point, I don’t think there is any landscape of the world, or waterscape of the world for that matter, that really has not been impacted to some point by humans.” As cities continue to grow to meet the needs of an increasing urban population, this issue assumes even greater importance.

In urban environments, soils are particularly affected by development, leading to soil compaction. This reduces the infiltration rates of soil and the ability for plants to grow. In addition, paved surfaces and rooftops contribute to increased urban runoff, which causes soil erosion and pollution of our waterways. Healthy soils, with good permeability and infiltration, are able to play a critical role in combatting these issues. Implementing larger tree pits or using suspended pavements along streetscapes, as well as converting underutilized space into productive open space, would provide a place for plants to thrive and allow water to infiltrate into the soil, reducing negative environmental impacts.

Caring for soil has important economic benefits as well. As previously stated, healthy soils produce healthy plant life. Street trees are more able to establish themselves, live longer, and require less maintenance when planted in healthy soils. Also, using soil as part of a site’s stormwater management system can reduce the costs of piping and other drainage infrastructure. For these and other reasons, investing in soils is critical to the success of any project.

In addition to compaction and erosion, contamination is another problem appearing in urban environments. Sites have become contaminated by waste and heavy metals due to prior industrial uses and runoff. Brownfield redevelopment, or the cleaning of contaminated soil, is not an easy task, but it is extremely important one. Ningbo Eco-Corridor, is one example of a project that utilized the site’s topography, hydrology, and vegetation to transform an environmentally damaging brownfield into a resource that filters toxins, provides habitat, and enhances public health. Another celebrated example of repurposing a previously contaminated site into a public amenity is Gas Works Park in Seattle, Washington. Formerly a coal gasification plant, bioremediation processes allowed the soils to be amended, and turned an under-utilized space into a popular public park, while maintaining the site’s historic significance. 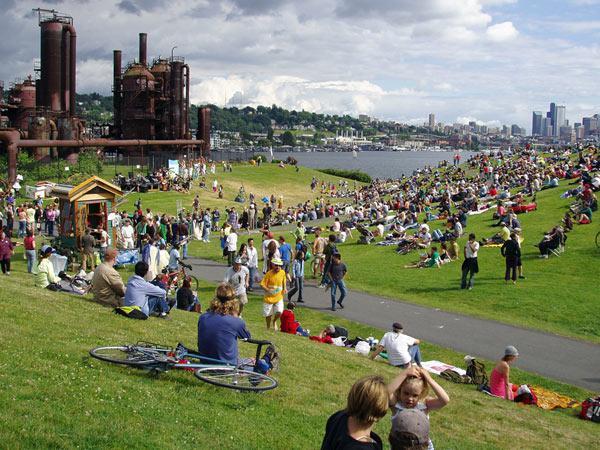 This episode brings attention to the importance of soil, the need for a better understanding of its complex systems, and the urgency of which it needs protecting. In the podcast, Jonathan mentions the need for a movement to soil quality regulations, or a Clean Soil Act, similar to the Clean Air Act and Clean Water Act that exist today. The creation of a soil management plan will ensure that we take the proper care in protecting this dynamic living system as we do for other important resources. In the meantime, may you, the reader, lead the way in educating your colleagues, clients, and agencies, about the need for healthy soils. If we consider the health of soils as we build, hopefully we can make it easier for soils to perform the processes that improve our quality of life and the environment.

—
Remarkable Objects, hosted by Leda Marritz, Creative Director at DeepRoot, is a new podcast about the intersection of nature and urban design. In each episode, we will hear from leaders and innovators whose work aims to influence the way we think about, design, and build the urban environment.