Osum River in Berat Landscape Design- Design Competition – by Felixx. Architecture could be considered an imposing task. Human intervention inevitably changes the dynamics of a landscape. But what if the dynamics could become part of the project? What if design manages to complete the landscape instead of transforming it? The competition entry of the Dutch architectural firm Felixx for Osum River in Berat, Albania, is an exemplary project in that sense. The competition was held by the City of Berat and mandated by the Office of the Prime Minister. It was a ‘research by design’ international competition to propose the landscape development design for Osum Island in Berat and to explore ways of resilience using the island as a test site. The competition was completed in March 2015.

The competition centers around a group of islands in the Osum River. Image courtesy of Felixx

The city of Berat sits along the Osum riverbank. There is a complex of small islands in the river basin. The islands’ size and shape change according to the water flow. This seasonal transformation reveals various landscapes throughout the year and demands a design solution that can adapt to each of them.

Osum is not a big river; therefore, it does not present a homogeneous water flow all year round. During summer, it becomes a narrow stream. In winter, the water quantity can exceed the capacity of its banks and can reach extremes similar to flash floods.

Current situation – During the driest periods only a small stream is flowing through Berat leaving most of the riverbed exposed. Image courtesy of Felixx

Current situation – Because of the seasonal variability, the islands’ morphology is continually changing. Image courtesy of Felixx

Design Proposal -Berat profits from the Osum river during all seasons – during high waters in winter and the dry periods in summer. Image courtesy of Felixx

This seasonal variation needs to be integrated to the urban context of Osum. The design team acknowledged these conditions and decided to work with them. They even went a step beyond: They decided that Osum needs water presence and a river all year round, and worked toward this concept. 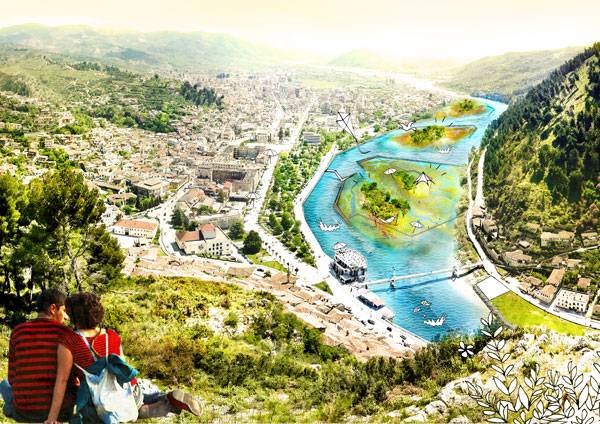 Spring and winter, the discharge levels of the Osum river increase. Higher islands stay protected as they are covered by higher curbs. Image courtesy of Felixx 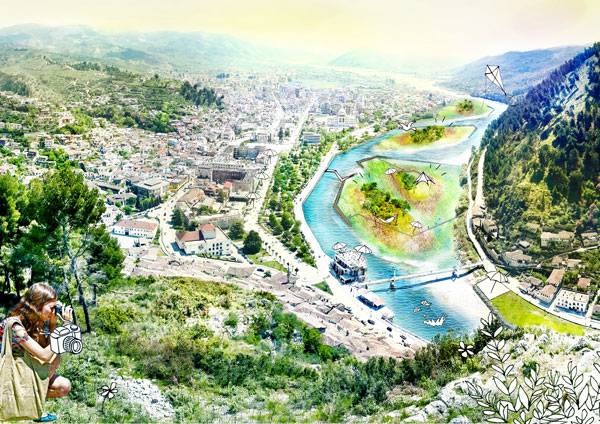 During summer, the modest base flow is directed into a single stream adjecent to the Northern quay, to make the riverfront part of the city’s scenery. Image courtesy of Felixx 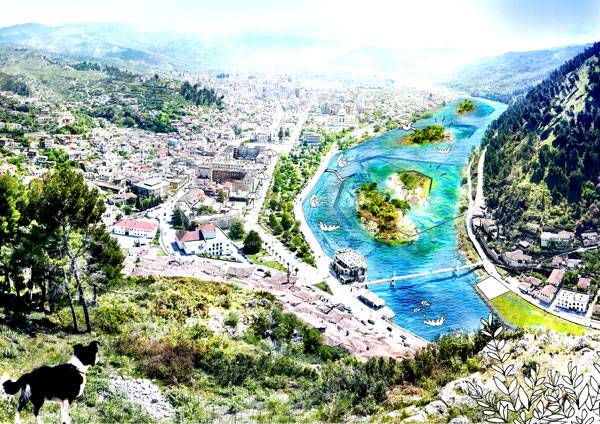 The proposal works on the development of landscape characteristics and offers an added value to the area, instead of focusing on objects and functions. It has the following aims: 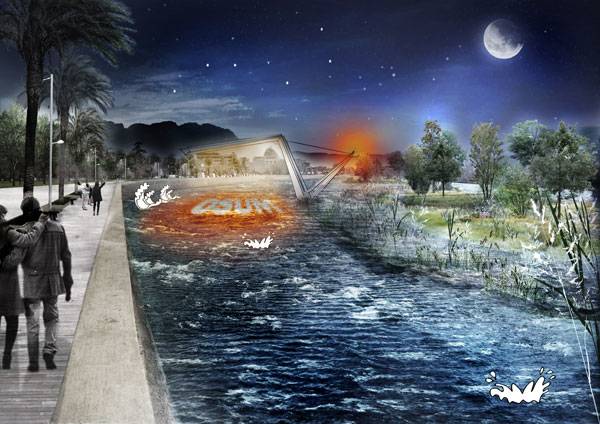 The above mentioned intentions have been tackled with a “building with nature” approach that offers certain important merits.

The topography has been reshaped to allow for landscape variations to emerge. Flower gardens in the summer give their place to water lands. The islands connect to the city when the water levels allow it, or they become independent landscape entities offering beautiful views. In order to ensure that Berat will have a river all year round, the topography curbs have been transformed. This provides the maximum concentration of water in a specific channel that the curbs create. The channel is adjacent to the northern quay. Along the northern riverbank, a new waterfront develops, while on the opposite bank, the islands and the riverbank merge into a totally variant landscape. 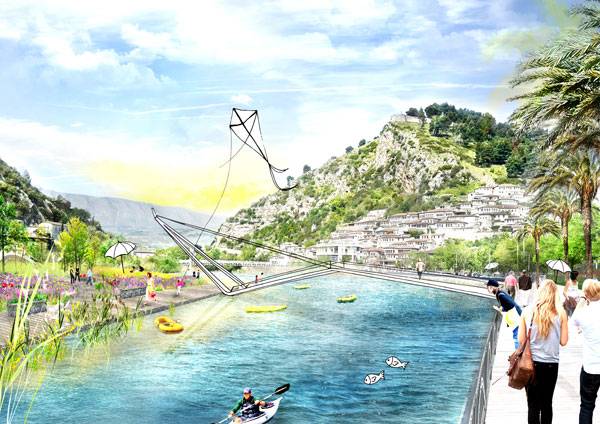 Summer. The riverfront adds to the city scenery. Image courtesy of Felixx

Retaining walls form the island shape. At the same time, the walls manage the water flow and direct the water stream, protecting the islands. When the water level decreases, a terraced landscape is revealed. The emerging surfaces become gardens that appear for only a few months each year. They mark the seasonal change and add color and interesting views along the riverbank.

The Bridge — A Beacon and a Landmark

Taking into account the flooding in terms of landscape protection is very important. When it comes to an urban context, protecting people from the flood waters becomes the most important parameter. In order to ensure that the city is protected, early warning of the upcoming phenomenon is crucial. 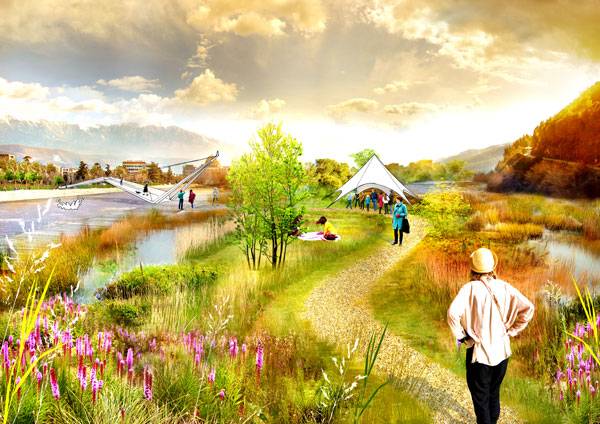 The bridge located between the riverbank and the islands functions as a connection between the two areas. When a flash flood is coming, the bridge folds in order to prevent accessibility and becomes a striking warning of the water level’s increase.

Is “Building With Nature” a Tenet We Should Embrace?

This project presents a certain sense of modesty and economy — not in financial terms, but rather in terms of means and resources. Yet it maintains its integrity and completeness. 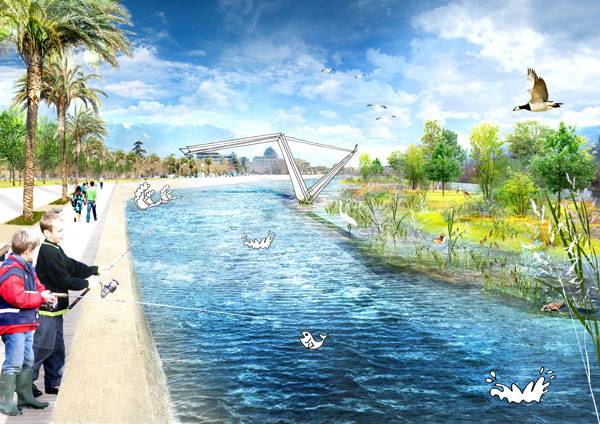 During peaks periods in winter and spring, the islands are no longer accessible for pedestrians, providing a last resort for animals and birds. Image courtesy of Felixx

We know that humans can construct anything they please. Imposing our power on nature has become dangerously easy. The new challenge is to make the environment our partner and consultant, rather than a field for demonstrating our achievements. So when asked this question: Is “building with nature” a tenet we should embrace? I would answer without reluctance “yes”. How would you answer it?