Sun Salutation and The Sea Organ-Designed by a Croatian Architect, Nikola Bašić.

If you happen to be at Croatia’s Zadar waterfront on a beautiful spring or summer evening, you might notice groups of people gathering around circular lit-up areas on the ground. Some of the people might point and laugh; some might try to catch the moving points of light before they vanish. Others might just stand and stare. Despite the lateness of the hour, there are probably a lot of children around, riding their bikes and scooters or simply running, following the colors and the movement of the lights. You might even spot a couple standing at the edge of the pool of light, kissing and hugging passionately. All those people are surrounded by soft, soothing music. What is this strange spectacle that attracts so many different people to this area, in the supposedly unattractive, dirty, and dangerous docklands? It is called the Sun Salutation, and it is part of the area’s transformation initiated by the adaptation of the Peninsula’s outermost pier to accept the biggest cruising ships. The waterfront is no longer dodgy, not to mention uninteresting. Nowadays, it is full of life, and when night falls, it transforms into a place of whimsy and wonder. The 2005 revitalization of the Zadar waterfront and the Riva promenade has left the city with two awesome art installations, which have become major tourist attractions: the aforementioned Sun Salutation and the nearby Sea Organ, both designed by a Croatian architect, Nikola Bašić. 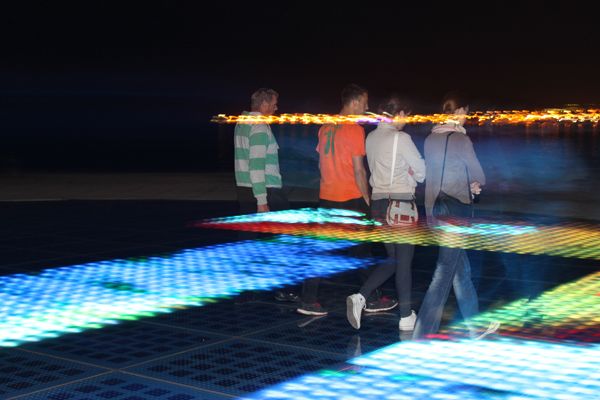 It all began with the creation of a large, comfortable staircase on the waterfront – a place to admire the famous Zadar sunset. Then, Bašić decided to turn the steps into a giant organ — the Sea Organ (Morske orgulje). It is a real musical instrument powered by the waves of the sea. The staircase consists of seven sections. The longest one, far to the right, has eight steps; each successive section is one step shorter, with the leftmost one being only two stairs long. The pipes hidden under the tiles and extending into the water are the source of the music. 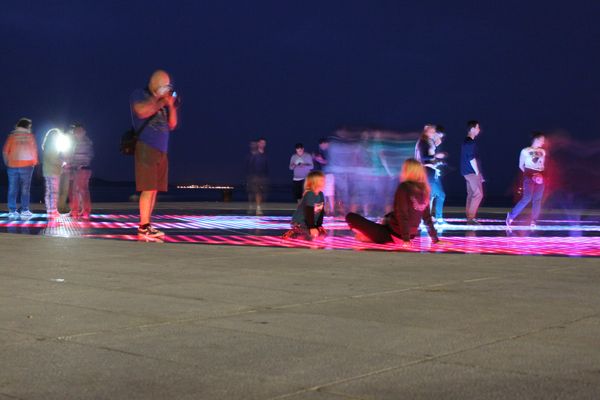 The Sun Salutation (Pozdrav suncu) project depends on a large circle of photovoltaic cells, interspersed with LED lights that come to life after sunset. The installation uses the rhythm of the waves to create the colorful series of light pulses. The cells absorb the solar energy during the day, converting it into electricity. When dusk comes, the lights switch on, displaying the colorful and bright patterns. Their intensity and shape depend on the amount of energy stored during the day. The installation mirrors the movement of the sun and the planets, which are represented by solar lights of proportional size and distance from “the sun”. The electricity produced by the photovoltaic cells is also used to light the whole waterfront. The architects of the new waterfront did not forget about the plants; the balsamic evening air is filled with the aroma of rosemary and lavender, growing in flowerbeds nearby. Nowadays, the Riva promenade is filled with laughter from people playing on the waterfront and listening to the soothing sound of waves in the fragrant warm air. Both installations are a perfect example how such spaces should be designed, making the space attractive and welcoming for all users. Article written by Marta Ratajszczak Featured image; credit Marta Ratajszczak Published in Blog