The metal sculptures of Floyd Elzinga, Ontario, Canada At first glance, you may think these behemothic objects are the remaining vestiges of a bygone era. They are, in fact, a series of contemporary works forged by artist and sculptor Floyd Elzinga. Canadian Elzinga is based in Beamsville, Ontario, with the best part of two decades’ experience creating environmental installations and sculptural landscapes. Upon graduating from Nova Scotia College of Art and Design with a bachelor’s degree in fine arts, Elzinga chose to return to his parents’ farm. Freshly armed with artistry and aspiration, his days of manipulating metal began there and then; after coming across some scrap metal lying around, he commenced working with the material and claims he “never looked back.” 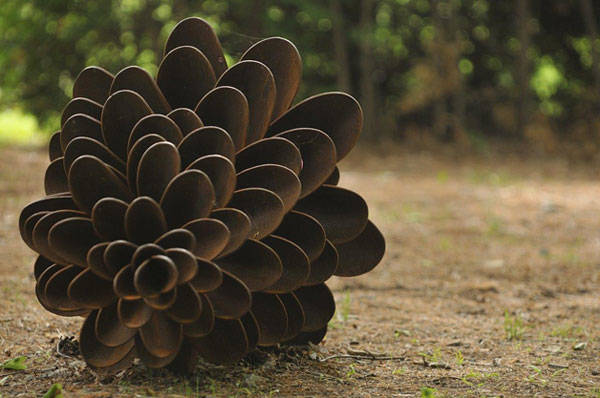 With his studio located on the Niagara Escarpment, Elzinga has no shortage of inspiration to draw upon. Both the natural, untouched environs and the cultivated, controlled landscapes that fringe his studio influence his work considerably. Many of Elzinga’s creations exalt and directly reference the quintessential Canadian landscape and his own unique perspective of the land. 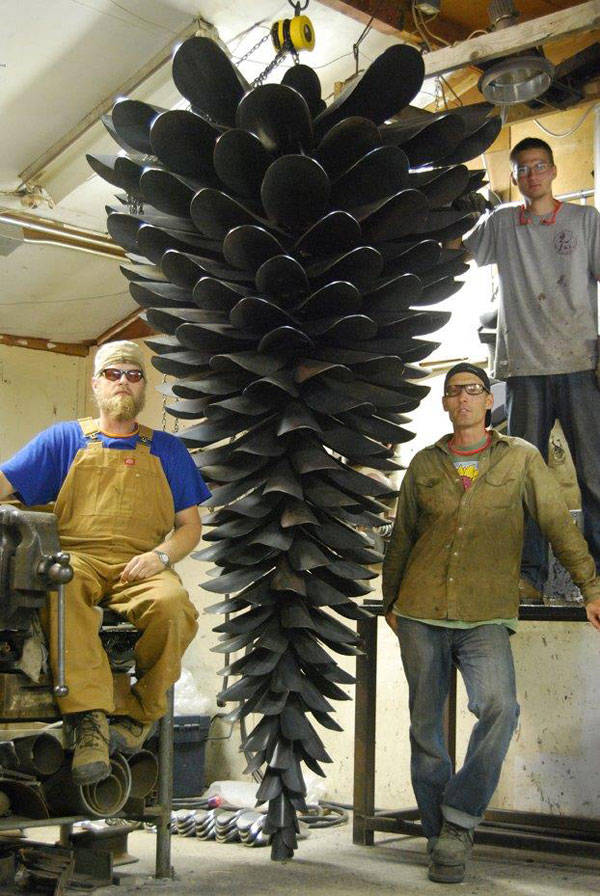 In using the natural world as a source of inspiration, Elzinga regularly references aspects of agriculture, politics, and religion in the form of hidden metaphors onto his conceptual sculptures. Instances of opposition or contrast are often explored and created in his work; his ideas embody this notion and are highlighted through dualities, such as the balance struck between industrial materials and natural forms. Elzinga has forged a career by glorifying the things that rouse his inner artist. These are the things that capture and reveal nature’s implacable impetus: decaying tree stumps, invasive species, and wind-ravaged trees, to name a few. 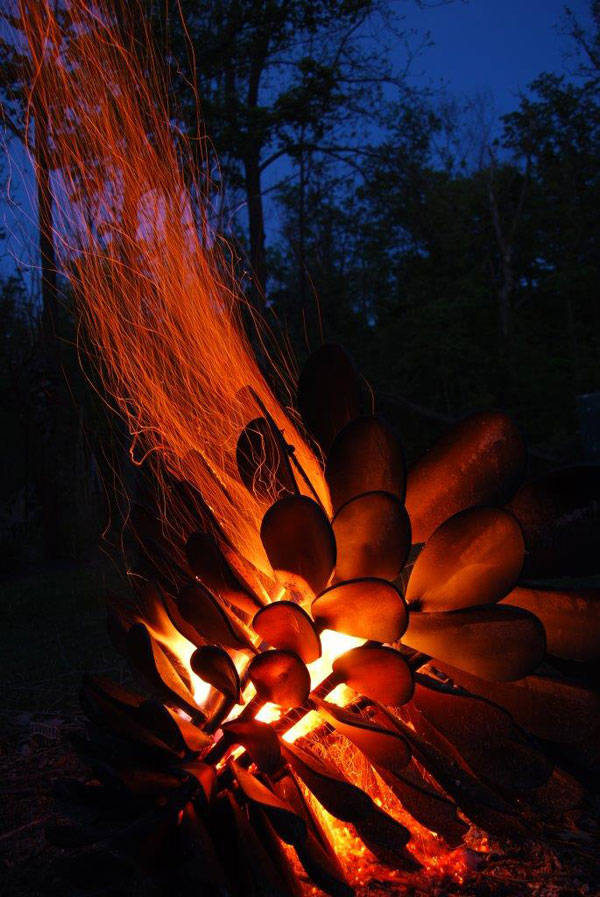 A Dichotomy of Material and Inspiration

Within his artistic palette, Elzinga has over the years made metal his dominant material of choice; a result of close to 20 years’ experience in fabricating steel. Elzinga himself describes the material as having a “malleable, plastic, and forgiving nature” and, along with its climate-resistant properties, it was these traits of the common, fast-working material that as a sculptor he was initially and is still drawn to, allowing him to conceptualize his ideas and thoughts in a persuasive and free-flowing manner. 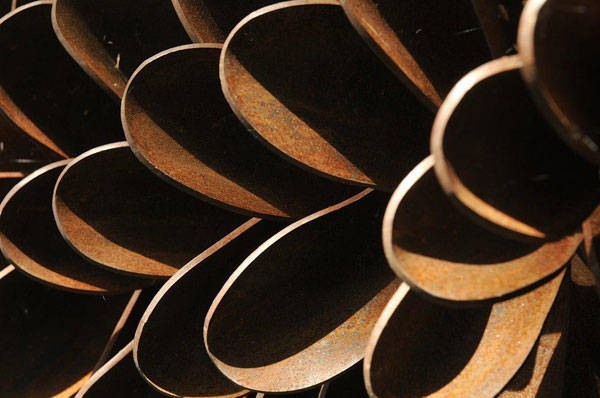 Much like a painter with a brush, Elzinga uses metal-working machinery to create textures and strokes, with a color palette determined through means of polishing, burnishing, sanding, grinding, rusting, or heating. A Manifestation of Innocuous and Aggressive Potential So by now you must be wondering how Elzinga’s metal-working techniques are applied to his pine cone sculptures? Upon closer inspection, one realizes that it is the creative use of metal welded together that form the whole. These “Colonization Devices“, as Elzinga has dubbed them, illustrate and explore the dichotomous nature of seeds — simultaneously seen as innocuous and aggressive. Pine trees have in past eras been regarded as symbols of immortality, and pine cones of male fertility. Related Articles: 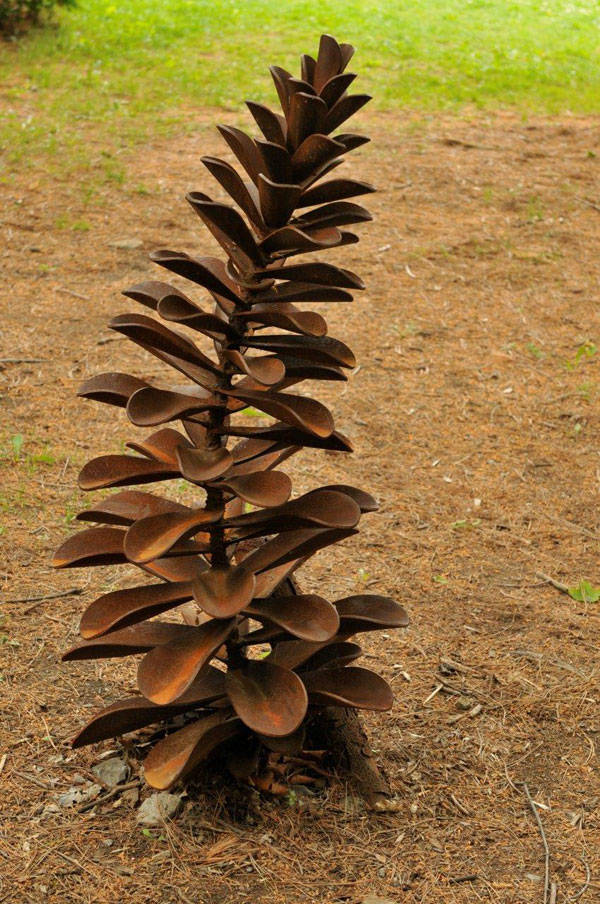 With that in mind, Elzinga sought instead to aim attention at the threatening, almost hostile nature of the seeds, using the ordinariness of steel and its commonplace use to liken them not to the organic yet geometricized form they resemble, but to machinery and artillery; in turn, equating them to hand grenades. This juxtaposition of the seeds’ reason for being – colonization — and the sculptures’ shape emulating a hand grenade or bomb inserts an irrefutable political agenda into the artwork and fouls the pine cone’s purity. By comparing the potential of both seed and bomb, Elzinga insinuates that the pair possess the innate desire to stay alive — to invade and colonize. 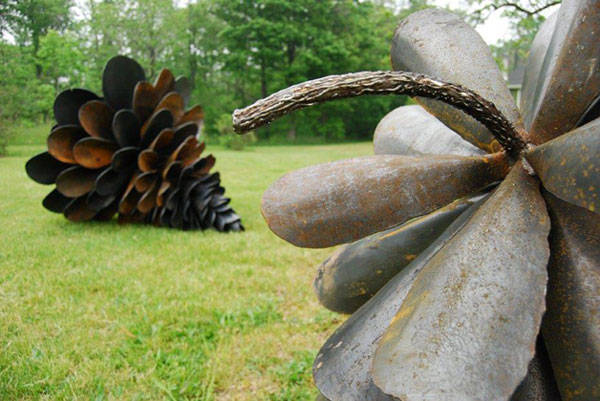 So as seeds lie on the ground, ready to spread, Elzinga’s fallen cones serve not only as physical manifestations of destructive and invasive forces, but also represent the idea of nature’s death with new life and regeneration — using the malleable medium of steel. Recommended reading: