Article by Paul McAtomney We take a closer look at 10 awesome projects from the USA.  For years, the United States of America has remained fertile ground for landscape architecture as not only a profession and academic discipline, but also as a modus operandi of design that engages urbanism, environmentalism, and culture. The replacement of the traditional city with expansive urbanism has lead landscape architects to encompass a myriad of landscape typologies, with the American post-industrial era providing fecund grounds for such projects. We take a look at 10 contemporary projects that are excellent examples of landscape architecture in America.

10 Awesome Projects From The USA

One of the latest additions from stalwart firm Field Operations, The Navy Yard Central Green is a 5-acre park in the locus of the 1200-acre Philadelphia Navy Yard Corporate Centre. The organisational logic of the Central Green is structured through circular geometries within which various active and passive programming is delineated and nested, with a “Social Track” framing the immersive interior park spaces.

The 50-acre urban hub of Assembly Row is located just outside of Boston. Since 1958, the Ford Motor Assembly Plant has sat dormant as a post-industrial edifice and infrastructure. As part of the redevelopment of this mixed-use district, Copley Wolff Design Group conceived a streetscape design, two pocket parks, and a six-acre waterfront park, restoring riverfront access and injecting life back into a latent landscape.

Again from Field Operations, Beekman Plazas (West Plaza and William Street Plaza) occupy the public realm at the base of Frank Gehry’s Forest City Ratner residential tower. The urban condition these plazas are situated in is one of edges and thresholds due to the surrounding high rise buildings. The design response is a conformation of diagonal geometries creating both intimate and open spaces. Raised planters further define spatial conditions in the plazas, complete with a planting palette from Piet Oudolf. 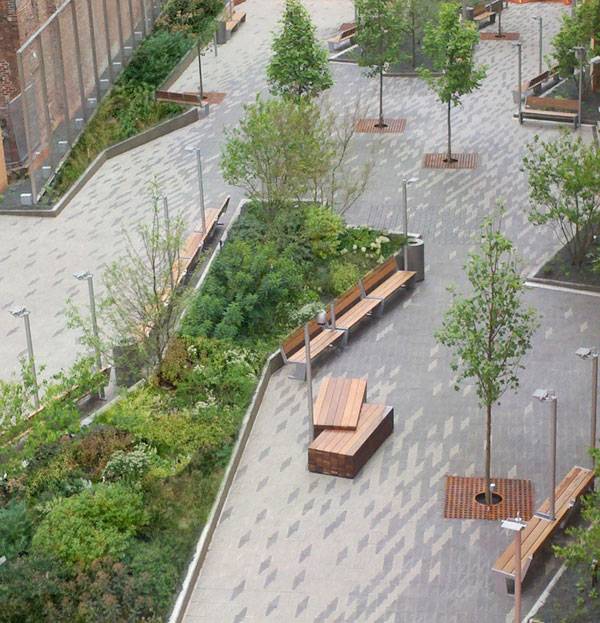 The green roof blanketing the headquarters of the American Society of Landscape Architects in the heart of Washington D.C. was conceived for both research purposes and to engage the public imagination, in turn educating audiences about the green roof agenda and sustainability writ large. Designed by MVVA in 2006, the 3000 square foot roof provides an active space for visitors as well as numerous environmental and social benefits. 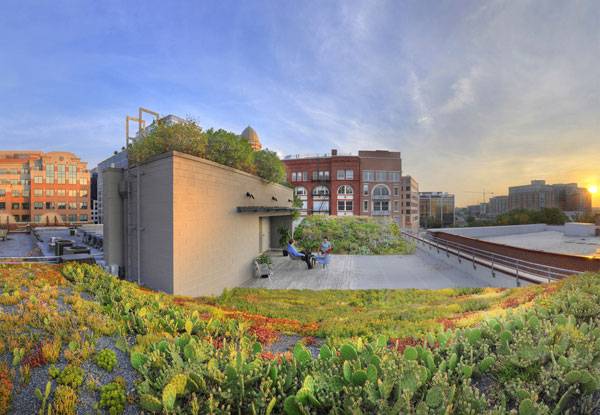 Taking inspiration from the geology of Tennessee, Hargreaves Associates transformed a portion of the former derelict waterfront of the Cumberland River’s east bank in Nashville, Tennessee. The 6.5-acre park is part of a large-scale transformation for downtown Nashville and is a hit with young families and children. Cumberland Park’s ecological function in the landscape also plays a huge part in the design scheme, incorporating floodplain preservation and storage, brownfield remediation, and stormwater harvesting. 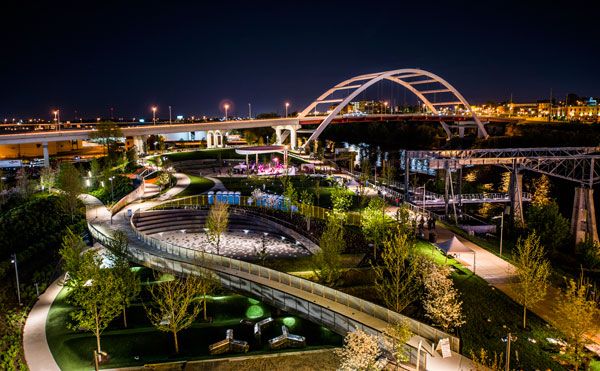 As part a first step in the renewal of Harlem’s industrial waterfront, West Harlem Pier Park relinks water and community through the creation of a dynamic edge condition. Analogous to the land/water interface exhibited in the natural world, the design is conceived as a cove on a beach, and, as on a beach, depositional processes accrete matter along its shoreline. 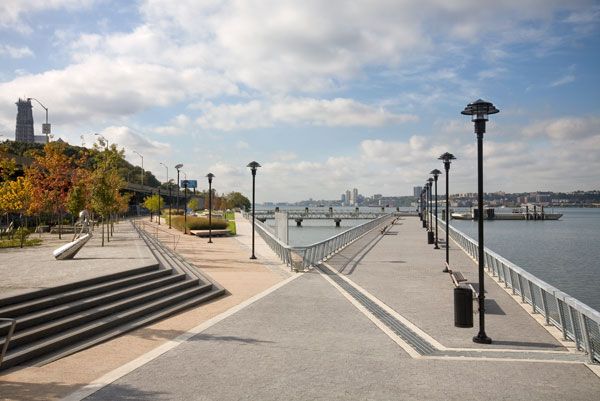 These scattered elements—granite benches, lawn segments, and planters—provide the spatial organisation for the park. Waterfront parks, by nature, are an inherently thin typology, but for the first time in 40 years, the designers were able to construct new piers into the Hudson River, giving the park a 40% increase in area.

7. The Park at Lakeshore East, by The Office of James Burnett, in Chicago, Illinois

The Park at Lakeshore East is a 5.3-acre green space set within a 28-acre development in Chicago’s central business district. Landscape architecture firm The Office of James Burnett had to contend with a 25-foot difference in grade from the southern to northern sides of the park. A limestone staircase facilitates the change of level and commands views beyond the site, and is part of an axial arrangement linking north to south. Sweeping promenades provide east-west circulation and slice the park into a series of programmed and unprogrammed interstitial spaces.

The Park at Lakeshore East, Chicago, IL. Credit: The Office of James Burnett

At 142 years old, Lakewood is the purest surviving example of the quintessential “Lawn Plan” cemetery. In 2002, Halvorson Design Partnership took on the challenge of integrating a large new mausoleum in the historic garden landscape as part of a comprehensive Landscape Master Plan. By reusing existing cemetery space, carefully defining building development, and establishing spatial experience between interior and exterior spaces, the design creates a poetic and revered landmark setting for respectful reflection. 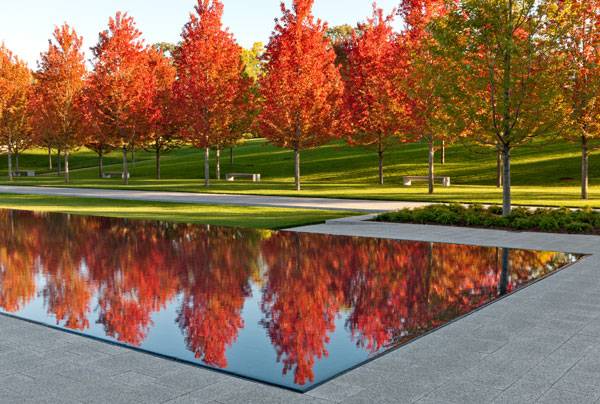 9. Annenberg Center for Information, Science, and Technology, by The Office of James Burnett, in Pasadena, California

The Annenberg Center for Information, Science, and Technology is a contemporary collaborative research centre pushing sustainability initiatives, with proof, due to its LEED Gold certification. The Office of James Burnett sought to reflect this environmental ethic in the building’s surrounding landscape. They did so by heavily focusing on water conservation benefits and departing from common ornamental plant palettes. The landscape design is organised through a series of spaces that reflect the adjacent glass building façade onto the ground plane through the colour spectrum of plants and materials. 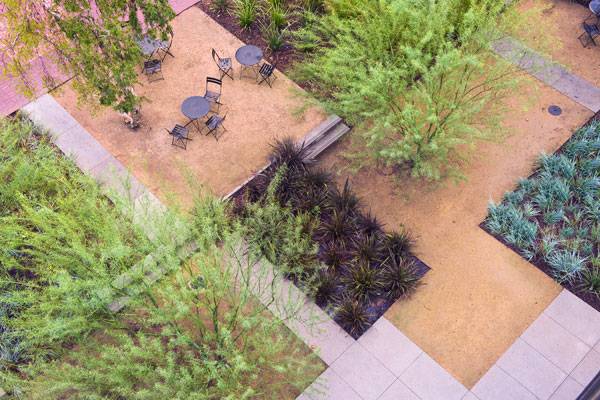 Mikyoung Kim conceived Levinson Plaza as an “urban grove”, acting as the locus of a multicultural and mixed-income residential development. The original site was a raised plaza that restricted universal access. Changes in grade from the designers now facilitate equitable access to all residents. Flanking a congested four-lane avenue, the design mitigates urban conditions, both visual and audible, through a planting strategy that screens traffic and simultaneously organises the interior of the plaza into a series of garden rooms nested with program. 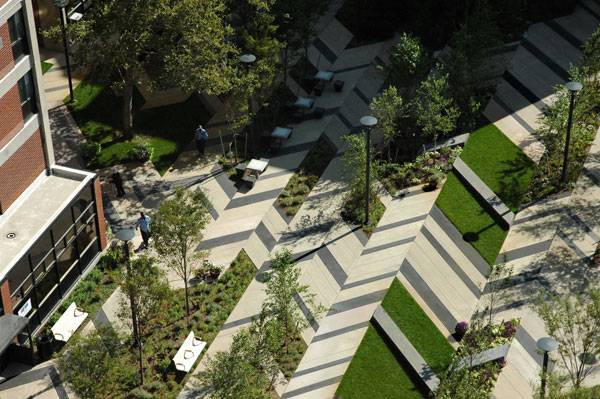 These ten examples offer but a glimpse into the sheer number of built works in America. With urbanisation relentlessly making its mark across large horizontal territories, landscape architecture will continue to expand its operational purview and play a pivotal role in shaping the built environment. What pieces of landscape architectural work would you have liked to see from the USA? Let us know in the comments below! Go to comments   Recommended Reading: