717 Bourke Street Plaza. by ASPECT Studios in 717 Bourke Street, Docklands, Melbourne, Victoria, Australia. 717 Bourke Street is a collaboration between architects at Metier3, real estate developers of PDS Group, and with landscape designers at ASPECT Studios. The design includes a 17-level office building set in an urban plaza. The site, which includes the plaza and adjacent streetscape is especially interesting, as it represents the gateway into Melbourne’s newly redeveloped Docklands neighbourhood. Previously an industrial area, the docklands precinct was an important shipping harbour up until the 1950s when it fell into disuse. With the city of Melbourne growing, it became evident that the redevelopment of these lands would be necessary to accommodate commercial and residential growth. 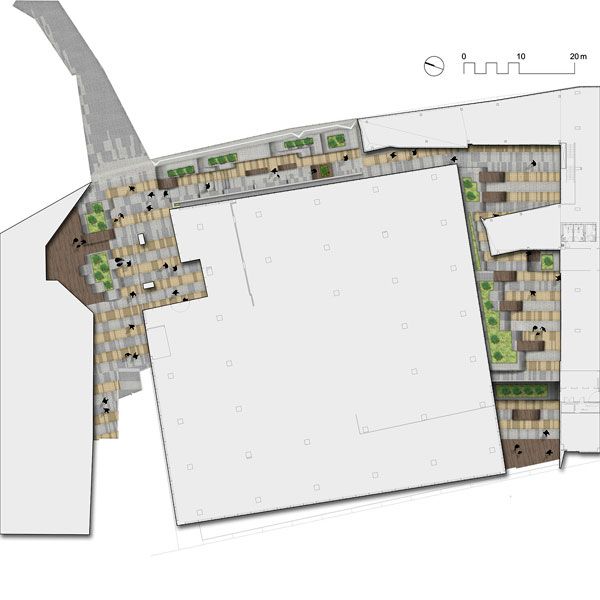 The revitalization of the Docklands began in the 1990s and is now more than half completed. It also represents one of Australia’s largest urban renewal projects, involving a space of nearly 200 hectares. Today, the Docklands are being transformed into a vibrant waterfront community. Located just two kilometres from Melbourne’s city centre, the neighbourhood is a mix of high-density commercial, retail and residential. 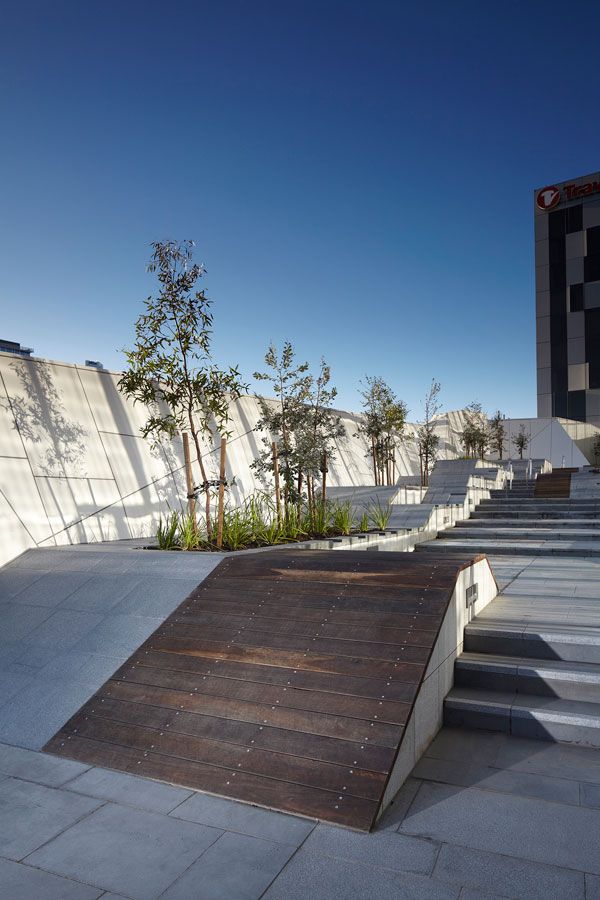 ASPECT Studios’ Approach ASPECT Studios is an award-winning Australia landscape architectural and urban design firm and responsible for the landscape design at 717 Bourke Street. ASPECT’s portfolio boasts a broad range of projects in both Australia and Asia, and their approach emphasizes sustainability and context, their process a careful balance between creativity and science. Related Articles Featuring ASPECT Studios: 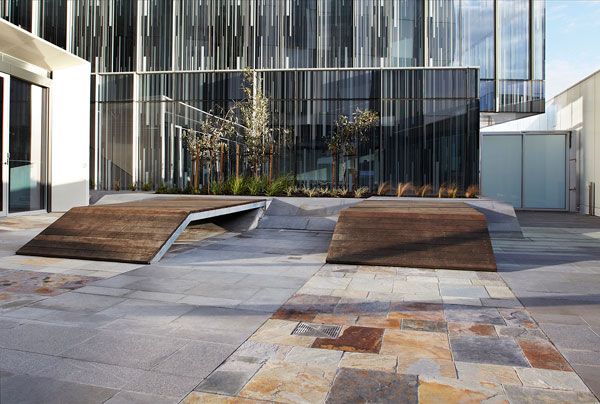 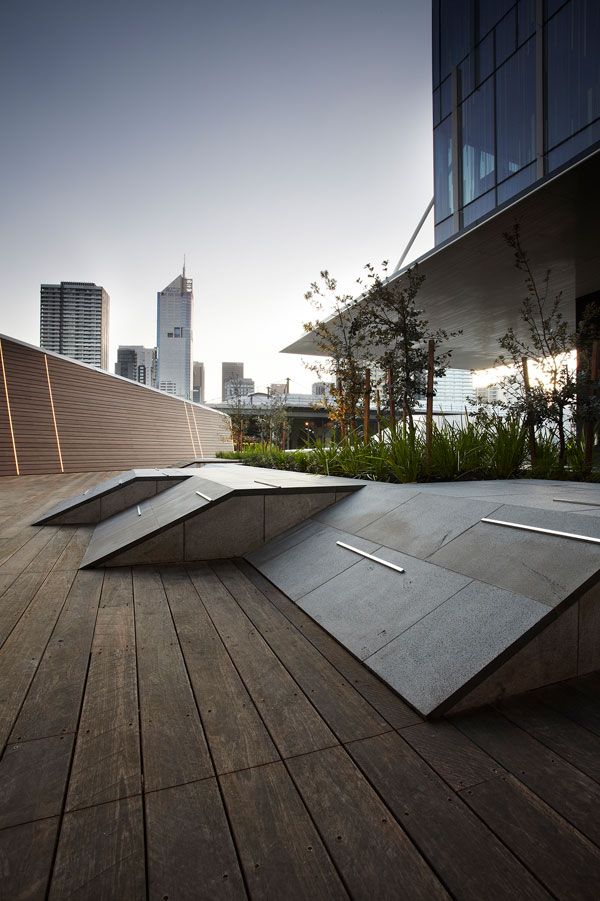 ASPECT Studio’s design aimed to avoid the typical relationship between architecture and landscape – the vertical building starkly contrasted against the flat, horizontal landscape. To achieve this, the landscape design incorporates many changes in topography, creating various planes through the use of seating, steps, ramps, raised beds and platforms onsite. These changes in surface grading mimic the irregular surface of the building facade. 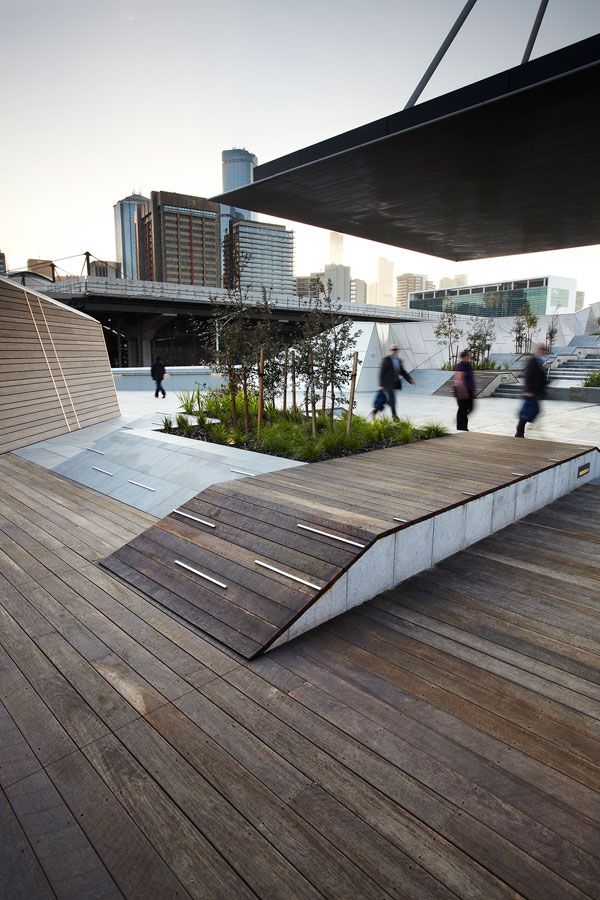 How Time Will Soften the Design A canopy from the building overhangs, blurring the lines between indoor and outdoor, and further breaks up the space into different horizontal planes. The trees, as they mature, will provide a canopy that will soften the impact of the building and make the space more inviting to pedestrians. 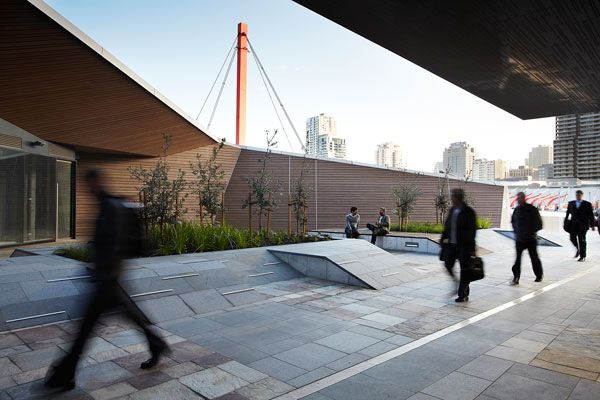 ASPECT Studios also aimed to create a unique and attractive space that would be easily accessible to pedestrians. Certainly with their clean, modern aesthetic combined with bold forms has created an extremely memorable space, but the changes in grades may reduce the site’s accessibility for many. The space also lacks green space. Although the use of various stones, arranged in bands of mosaics does help to break up the space, The landscaping ultimately does little to soften the building and results in an extremely architectural design. ASPECT’s Analytical Process The firm’s analytical approach was evidenced in their process, which used extensive modelling for wind and microclimate conditions to inform the final design, which creates various spaces within the plaza. Material selection was careful, and selection was based on lifecycle impact in combination with the desired aesthetic. Wood, stone and metal as the primary materials help to give the design a clean, modern look that compliments the building while also blending seamlessly into the urban design character of the rest of the city.

Planting and Stormwater Recycling The site’s planting scheme uses native plant species that are adapted to local conditions, especially species that are drought tolerant. Some planters even contain native wetland species that would have been historically present in the area. Water was also an important consideration onsite, with the design of the site incorporating infrastructure for stormwater recycling. 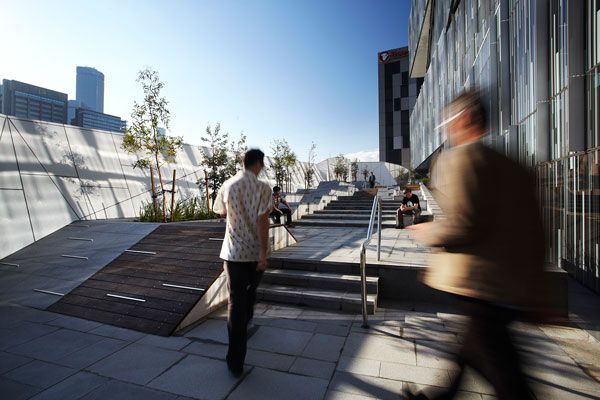 A Gateway to the Docklands? As in the case of many modern, corporate plazas, ASPECT Studios were presented with a particular challenge in the design of this site: reconciling the needs of both a private and public space. However, this site’s location presented a further challenge to designers: to bridging the gap between Melbourne and the newly revitalized Docklands area. While Bourke Street Plaza has certainly generated interest and created a unique centrepiece for the Docklands, it is not yet clear if the site will succeed in opening up the Docklands to locals. 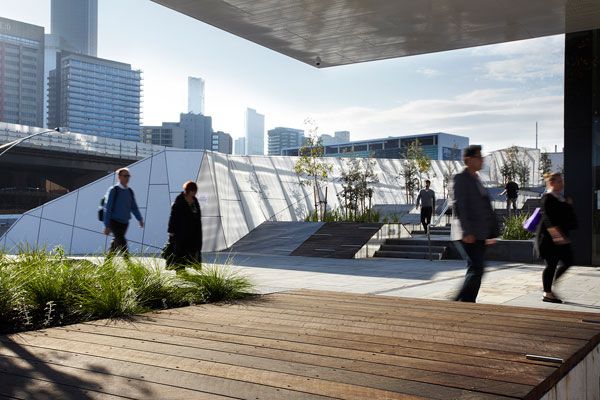 If you’ve made it down this far, congratulations, you have a better attention span than the average human being. Now you’ve finished yet another high-quality LAN article you have three excellent options:

1. Return to our homepage and be spoiled for choice with an array of awesome articles 2. If you enjoyed this article click on one of our related articles below 3. If you want the premium treatment, sign up to our very exclusive newsletter here! What ever you decide have an awesome day. -The LA Team