Solar City, by Atelier Dreiseitl, in Linz-Pichling, Austria. Debates on the subject of sustainability arose in the 1970s and reached their peak in the 1990s. Nevertheless, this debate remained on a theoretical level. Thus, a question emerged: How can sustainability be applied in practice? The Solar City project in Linz-Pichling, Austria, is an attempt to unite different perspectives – social, environmental, and economic — and has the goal of becoming a European example of sustainable urban development. Atelier Dreiseitl, the landscape designers, has the ambition to promote sustainable projects with a high aesthetic and social value. As one of the leading landscape architects of Germany, they are a specialist in ecological landscape design and water concepts. 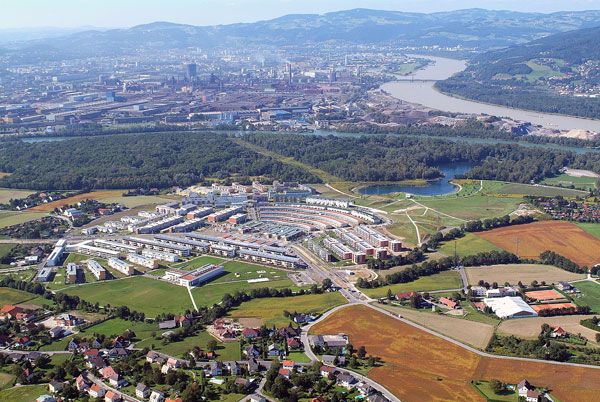 As in other cities around the world, Linz had an accelerated population growth in the 1990s, with an enormous demand for housing. Due to the fact that the city owned large, connected pieces of real estate in Linz-Pichling, that urgent need for expansion resulted in the Solar City project. It is located in a rural ecologically and legally protected wetland, in the narrow area between the Traun and Danube rivers. The designers had to deal with these issues in order to realize high architectural and ecological quality. The landscape design had to ensure that the natural value of the protected areas would not be harmed by the building development. 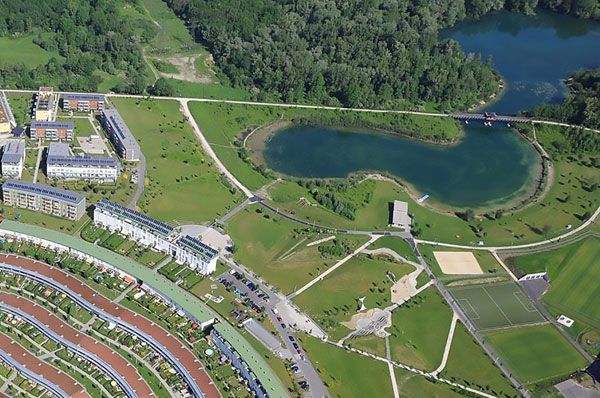 Sustainable Methods for Dealing with Water As a part of a “wastewater-free housing estate” pilot project, a urine separation system was installed. The recovered urine is used as fertilizer for agricultural purposes while the solid waste is composted. This innovative wastewater concept purifies the gray water from showers, dishwashers, etc., in a constructed wetland on the site. Afterward, the water is discharged into the nearest stream. Through this water concept, the nutrients return to the natural cycle for use in agriculture. See More Projects Featuring Atelier Dreiseitl: 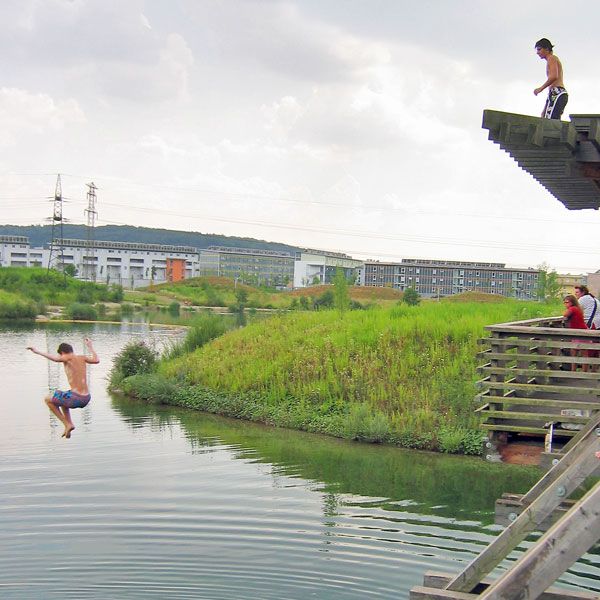 An Accessible System People Can Understand Furthermore, the sustainable rainwater management system follows some important principles. The drainage, collection, and disposal of the rainwater on site is achieved mainly by means of gutters, retention hollows, and vegetated swales. These are integrated into the open spaces so that the natural rainwater cycle is visible and comprehensible for the inhabitants. 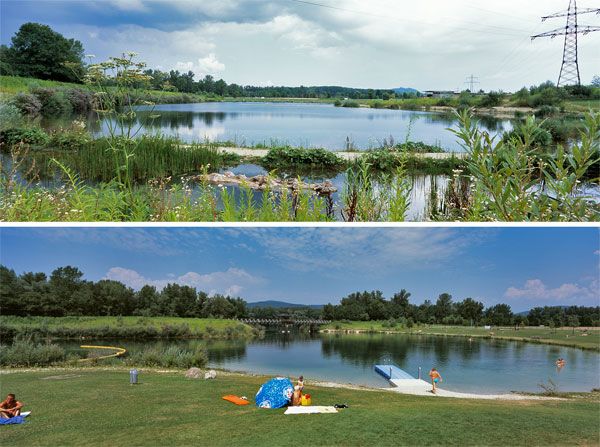 Accommodating 4,000 People Built to accommodate 4,000 people, Solar City had to respond to a variety of needs of neighbors while also catering to the new residents. Being in the immediate proximity of a sensitive natural landscape, the project required careful planning. On one hand, the main objective was to limit and control the anticipated high user pressure that could be exerted on the sensitive alluvial forests, and on the other hand, there was a need to provide attractive open spaces with high recreational value in and around the project site 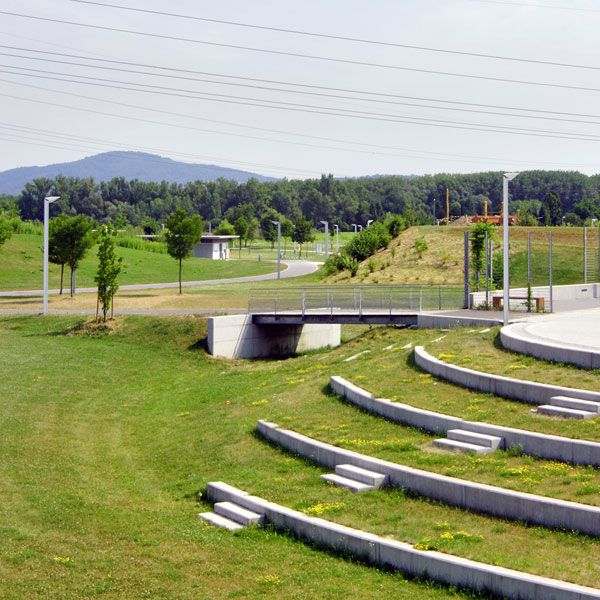 Fulfilling Recreational Demands The main elements of the landscape design are the Klein Weikerlsee, the “Hilly Park”, and the center in Solar City. For integrating the needs and requirements of both the residents and the natural environment, the Klein Weikerlsee lake in the northern section of the site was extended by an additional 70 percent. In the southwestern part, the existing landscape was preserved and allowed to develop naturally. The southeastern shore of the lake was transformed into a large swimming area that fulfills a recreational demand. The “Hilly Park” Constructed from the material excavated in extending the lake, the newly created “Hilly Park” serves as a pleasant environment for walks, recreation, or bike tours. Furthermore, the park is equipped with playgrounds. This landscape park serves as a transitional filter between the residential area and the natural landscape. Additionally, in the legally protected Traun-Danube Alluvial Meadows, trails were created for taking walks and having the chance to discover numerous rare species of fauna and flora. Similar species that can be found in the alluvial forests were included, such as gray alder (Alnus incana). 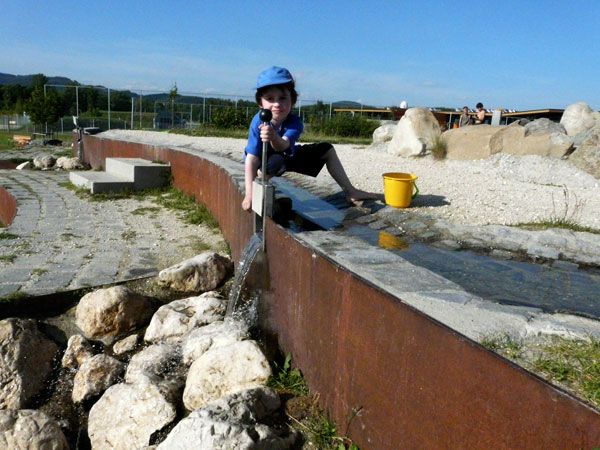 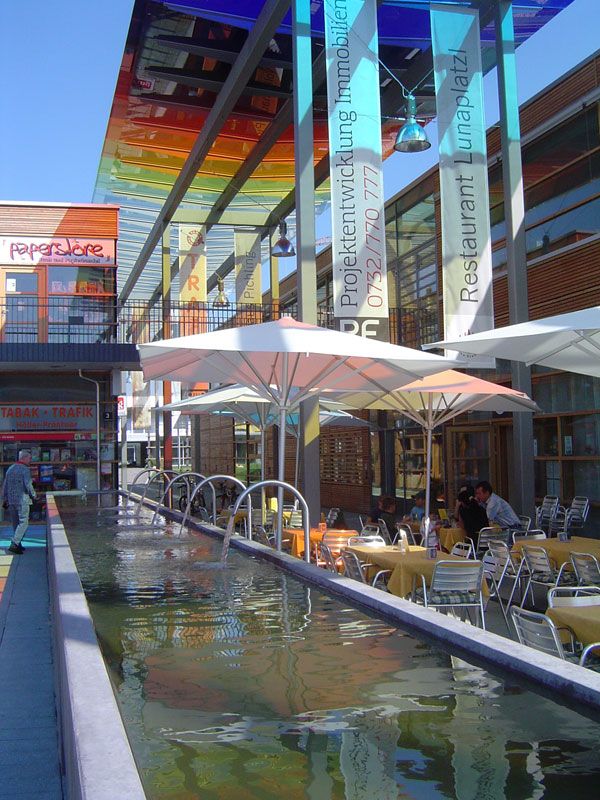 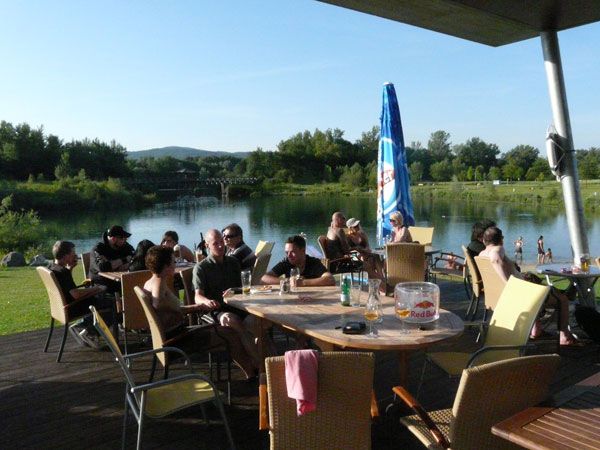 At the center of Solar City, a shimmering green surface covers the streets. This also acts as a sign for vehicular traffic to adjust their speed. Atelier Dreiseitl chose slabs of concrete and granite for the paving surface, developed especially for the location. The color of the surface harmonizes with the light gray-green facades of the buildings. In the north of the square, rows of native trees create a definitive edge and separate public from private. 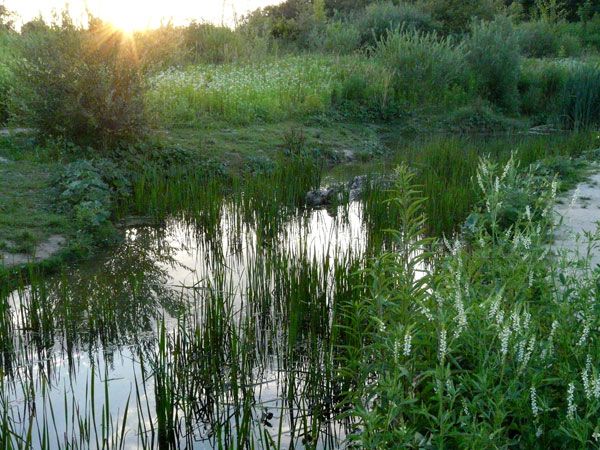 Practicing Sustainable Development on Protected Natural Sites As an example of sustainable urban development, Solar City unites the recreational needs of the residents with the sensitive natural landscape and economic factors of energy and environmental performance. Since March 2007, the post-occupancy evaluation developed by the city of Linz provides a documentation of the project’s quality on climate protection, user satisfaction, and energy management. Solar City shows that it is possible to practice sustainable development even on protected natural sites. 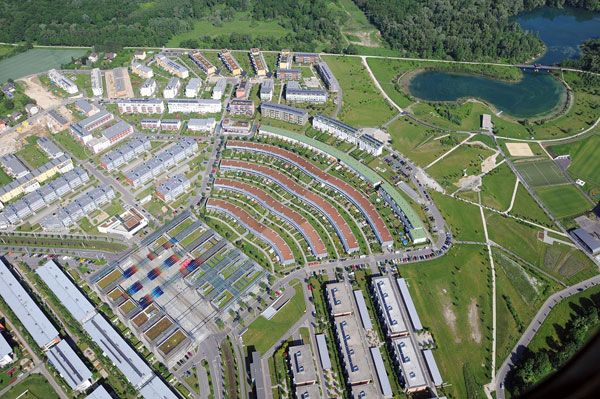