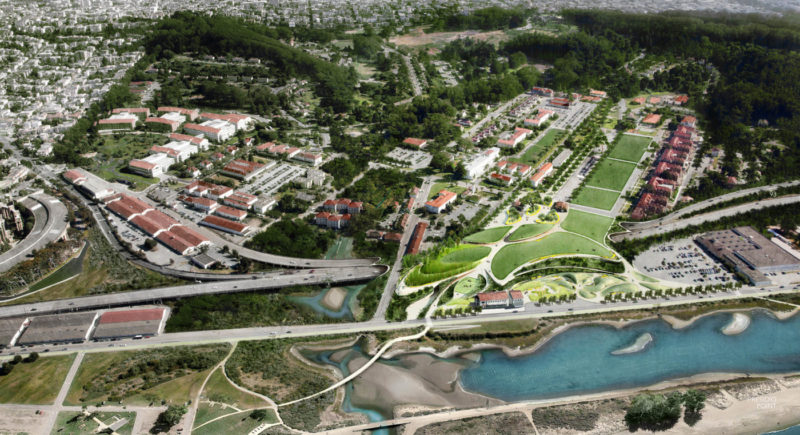 The news broke late last year: a design team has been picked to handle the exciting Presidio Parklands project along the bay of San Francisco.  Adding to its impressive resume of high profile spaces that includes the High Line, Fresh Kills Park, and Navy Pier, James Corner Field Operations will lead the design team in this uncommon opportunity to enhance the beauty, the culture, and the ecology of San Francisco through  development of this key land.

The Presidio Parklands is a 13-acre site being generated by the Presidio Parkway, a project lowering underground large portions of the main highway to the Golden Gate Bridge.  The land is full of potential.  James Corner called the site “a place where the Presidio meets the bay, a place where the city can reflect back upon itself, a place where urban life meets the most amazing natural resources, unparalleled by any other city.” (1)  The Parklands have direct views to the Golden Gate Bridge, Angel Island, and Alcatraz.  It is situated in a national park and borders the Crissy Field Marsh.  The site is complex: it is a bridge between the wooded Presidio, the marshlands, and the shoreline; it contains the Crissy Field Center Youth Campus; it connects to a decommissioned military base; and it is being directed by three different agencies, the Presidio Trust, the National Parks Service, and the Golden Gate National Parks Conservancy.

An overview of the existing site provided on the Presidio Parklands Project website.

JCFO was chosen in December from the pool of five shortlisted teams that presented conceptual designs. In response to a request from trust officials, James Corner asked EHDD—a local architecture firm that was part of another team—to join the design efforts.  James Corner’s both bold and understated proposal played on the romantic notion of observation points that only could fit a city like San Francisco, with its eminent views to iconic landmarks in and across the bay.

A view from the walk below the observation points.  The simple forms enhance the beauty of the surrounding views rather than cluttering them.  Image credit: James Corner Field Operations

Let’s get one thing straight though: JCFO’s proposal, though it got them the job, is not intended to be the design for Presidio Parklands.  The final design is instead to coalesce from a large amount of public input.  The Presidio Trust’s website has a dedicated place for feedback from the public worldwide.  Since January, a series of public workshops have been taking place to get community stakeholders involved in the design process.  This heavy public input could mean that the final design has little to nothing to do with the wrinkled bluff and romantic observation points illustrated in James Corner’s proposal.

Since the competition is not translating into design, the question must be asked: What is the Presidio Trust expecting from the future of the Parklands?  We get a hint from a comment by the executive director Craig Middleton, who incidentally, recently transitioned out of the role he held for fourteen years. He said, “James shows an approach to the public arena that really is essential. We don’t feel we need to create an icon. This should be a place that celebrates the icons all around us.” (2) This is a compelling reason for the emphasis that is being placed on public input during the initial phases of this process.  While JCFO seems to understand the need for the design from becoming too monumental, it must also be careful not to swing too far to the other end of the spectrum.  A trite and unremarkable landscape will waste the valuable resource of new land that is the Presidio Parklands in the unique urban fabric of San Francisco.

The design is expected to be completed by the end of the year, with construction finishing in 2018.  The estimated bill for the Parklands comes out to $51 million.  Of that, $33 million has already been raised, largely through private donations.  Very little of the money of the remaining sum is expected to come from public funding. When complete, the park should cohesively improve the ecological, cultural, educational, and recreational landscape of San Francisco.  Will JCFO create another urban-defining park with the Presidio Parklands, one that intimately responds to the city’s needs? Time will tell.