Escale Numérique, by JCDecaux and Mathieu Lehanneur, Paris, France. The city of Paris aimed to increase the function of its urban infrastructure in 2012 when city officials held a competition to design intelligent street furniture. The need to integrate technology into the urban context is imminent for many cities, and this has led to a variety of design solutions. The winner of this competition was the world-leading outdoor advertising company JCDecaux, in collaboration with designer Mathieu Lehanneur. Their project, Escale Numérique (Digital Break), creates a series of WiFi stations where people can access information about the city and connect to the Internet.

This urban development project is designed to create a space for people to use the Internet. A shade structure is created from a plant-covered roof supported by architectural elements that resemble tree trunks. Concrete swivel chairs are anchored underneath this roof, with a table and outlets for each person. WATCH: Escale Numérique, it’s in French but the idea speaks for itself Questioning the Connection The implementation of this project raises several questions about the function of urban infrastructure. Do we really need to be connected to the internet at all times? The urban aspect of the city is so diverse, with so many opportunities for interaction. Shouldn’t we build upon this instead of making it so easy for people to ignore their surroundings? 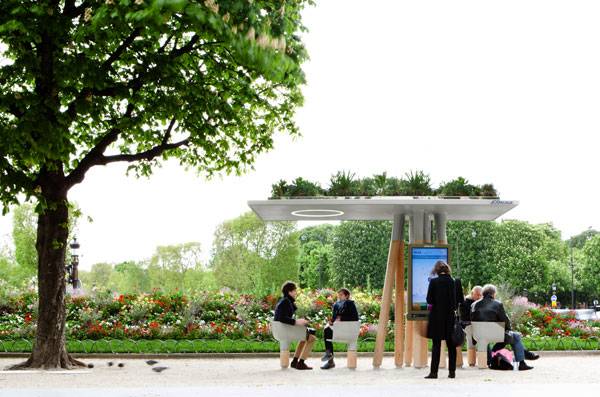 A Connected Haven of Peace Located on the Rond Point des Champs-Elysées, Escale Numérique provides a sense of respite from the buzz of traffic and pedestrian movement within the city. People can sit and focus on something, whether that may be their smart phone, laptop, or a book. 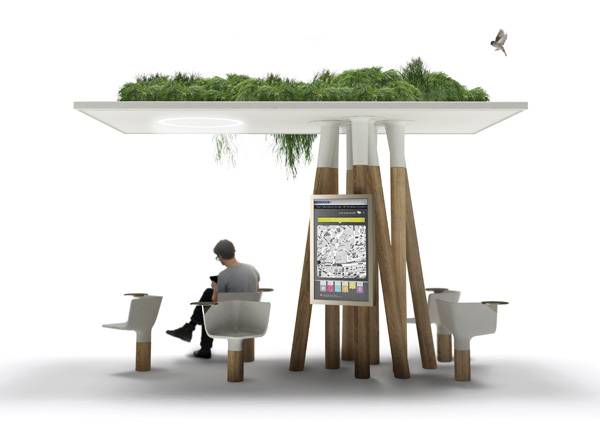 The protective shelter of the roof and the access to free WiFi give people a feeling of separation from their surroundings. The access to the Internet is a revival of the underground fiber optic network that supplies the capital. These stations raise this connection from beneath the ground and make it accessible to the public. 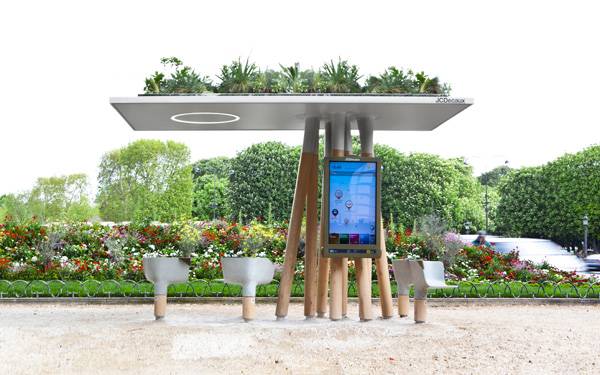 This idea is similar to the way the Wallace Fountains brought drinking water to Parisians in the late 1800s — the drinking water that was circulating beneath their feet became directly accessible to the public in the same way the Internet cable network is being brought up for public use. An integration of the digital and physical landscapes allows users to be productive within the city in a world in which we are increasingly dependent on technology. 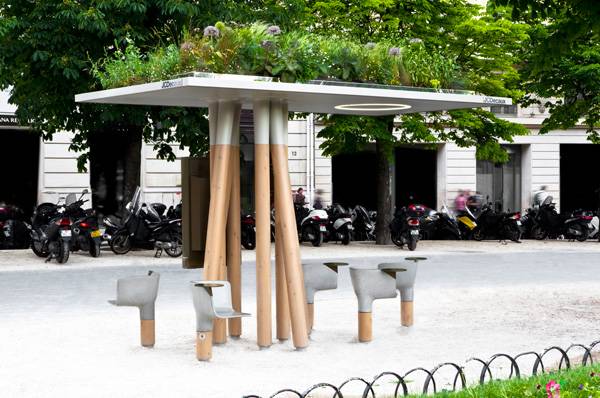 The Need to Be Connected We are so reliant on technology today that when we don’t have instant access to it, we become frustrated. Not so long ago, the only way people could interact was through face-to-face conversations. They got things done without the ease of computers or smart phones. 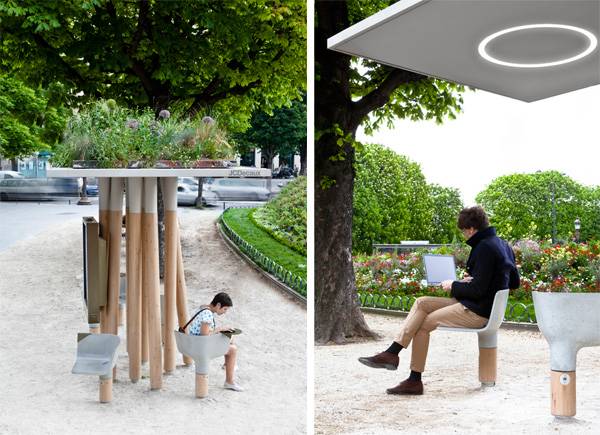 The rapid development of technology in recent years has created a new paradigm of interaction and productivity. So much of our world now depends on the Internet, and our lives are now stored in the cloud or on our hard drives. It is simply how we get things done in this age of modernization. The benefits of technology, such as increased efficiency and access to information, are not without the negative effects of decreased social interaction and disconnection from the natural world. Is Avoiding Feeling Uncomfortable a Good Thing? Escale Numérique provides a connection for Parisians and tourists; however, they do not interact with each other. The large touch screen billboard is designed to be used to find your way around the city and create an augmented reality. This was done in response to the feeling of hesitation a tourist feels when he has to ask a local for directions. Related Articles: 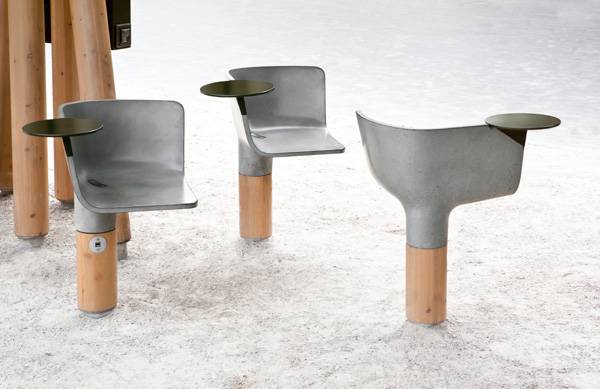 It eliminates the need for that uncomfortable interaction. However, travel inherently puts you out of your comfort zone, so why not build upon this through design? A local will know things a large touch screen could never tell you, such as the best place to eat or the best way to get there. 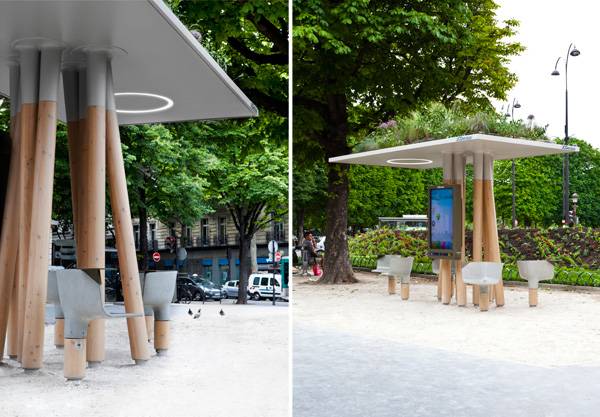 Public Space and Technology Public space functions at so many levels that it is hard to ignore its importance. It shapes the way we interact with people and our surroundings, especially in cities. Today, the smartphone has enabled people to move through public spaces as if they were in their own private bubble. The typical distracted walker looking at her phone is often encountered in a city. When you sit down in a public space, it is so easy to remove yourself from your immediate surroundings through looking at your phone, laptop, or tablet. Doing so causes a loss in the connection to place, and place is what landscape architects are supposed to design. 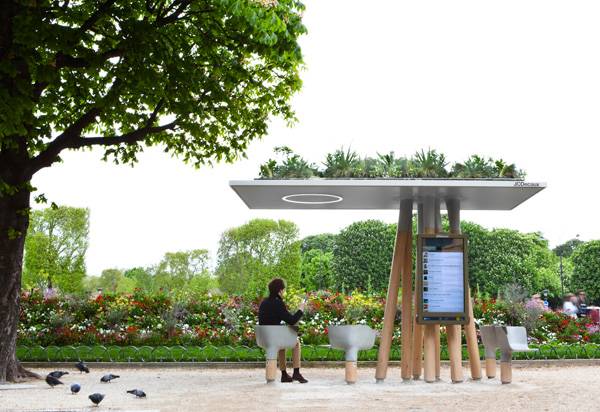 Why spend so much effort in the design and implementation of a public space if people are not going to fully appreciate it? Escale Numérique loses this connection to place that we should be creating and celebrating in the city. Yes, this project is a beautiful integration of technology and design, but is that what the world needs? Maybe we should approach the design of public spaces from the understanding that they should create connections between people, not electronics, because that is what is lacking in cities today. Landscape architecture has the potential to be the leader in this approach to design, but it hasn’t been accomplished quite yet. Recommended Reading: