HOSPER design Genk C-Mine. For much of its history, the Belgian city of Genk depended on coal mining for its economy and development. So when the mine at Winterslag closed in the late 1980s, city fathers knew that any repurposing of the site must reflect that legacy. Two initial plans for the site renovation fell through before HOSPER architects, in collaboration with Atelier Ruimteliijk Advies, created the design that has culminated in the Genk C-Mine square. The design, honed from 2006 to 2012, reconfigures the site’s open spaces around the remaining mining industry buildings and creates a cultural hub. A 0.5-hectare free space was rebuilt to accommodate a large variety of activities and events. From relaxing to chatting to watching concerts, local visitors and tourists can experience the diverse options offered by the flexible space. 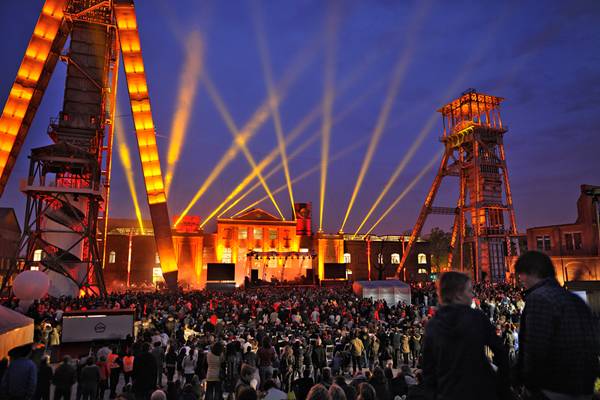 The Design Genk C-Mine was reconstructed by adding attributes that connect its new functions to its historical past and ensure the space’s aesthetic quality. Starting from the ground up, the square was paved with Belgium black slate, whose similarity to coal reminds visitors of the material formerly extracted from underground. The black slates were arranged in sizes and shapes, from very small scraps to large, shiny plates, giving color uniformity to the floor while creating interesting contrasts in texture and brightness. 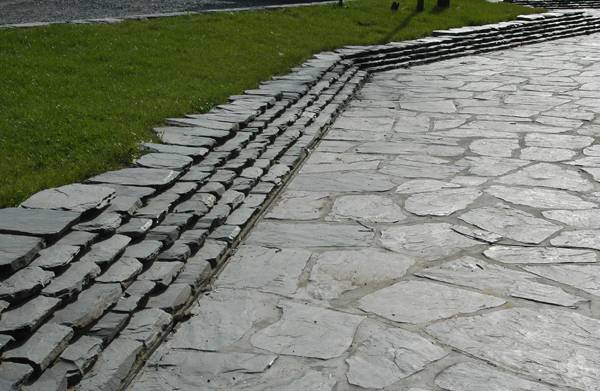 The dark tone of the floor harmonizes with the contemporary design of chairs and stools made of folded stainless steel plate, with the internal and rear surfaces coated in red. The seating elements, designed by Carmela Bogman, are arranged in an informal way to accommodate both individuals and small groups. The furniture also blends with the square’s functional flexibility by being easily removed when space is required for bigger events. 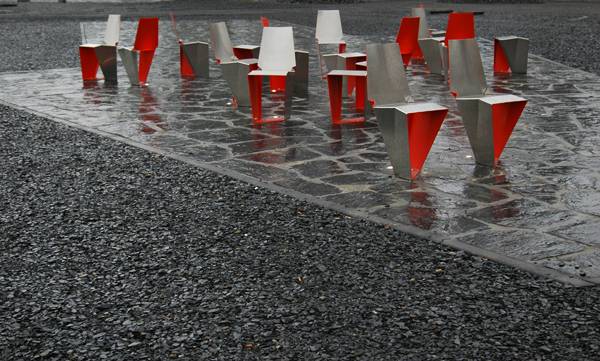 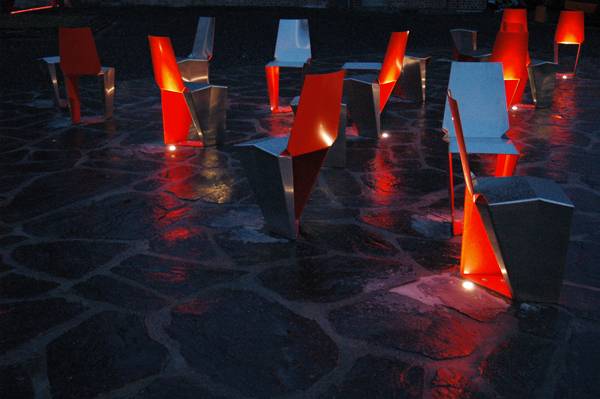 Major Renovation Project Genk C-mine square is surrounded by old brick buildings, most of them renovated from the mining days. The buildings offer programs similar to those provided in the open space, in terms of cultural, educational, and recreational goals, as well as in their concept of preservation through new functions. Among the buildings located around the square, the former energy building stands out for being rebuilt to house indoor activities in a spacious and illuminated environment, ensuring its relationship with the adjacent open space. The Brussels-based architecture office 51N4E transformed the 20th-century industrial environment by renovating the remaining parts and conciliating them to the two new concrete buildings. 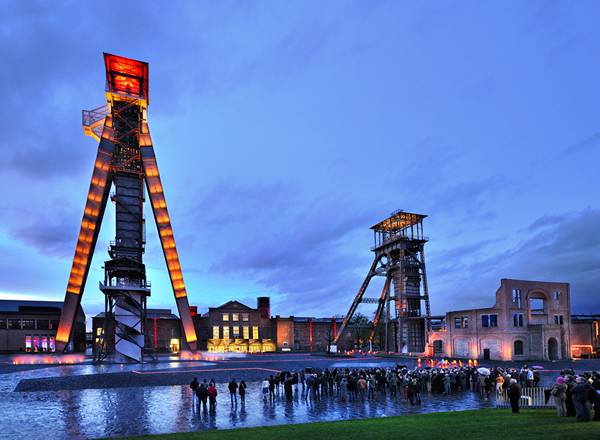 Renovation of buildings and industrial structures greatly adding to the feeling of the space. Photo credit: Pieter Kers.

The main entrance of the Genk Cultural Center building is centered between two shaft towers that are the reference elements of the former mine site. The imaginary triangle shaped by the three components — the smaller and larger tower and the building’s main door — traces an axis in the square that guides visitors and defines the organization of community events. The Belgian office of NU architectuuratelier reintegrated the iconic towers to the underground by designing a lively museum that tells the history of the site’s evolution from its industrial past to the technological present. The reconfigured space is called C-mine expedition and consists of adventurous activities through the routes formerly used by miners. Starting under the smaller tower and the ruins of the former mine reception building, the excursion continues through the underground passages, where objects and images from the past are exhibited along with modern installations. The expedition ends with an activity that challenges explorers to climb up a tall stairway, which ends with a surprising view on the environment, completing the experience of learning about the former workplace while enjoying its new features. 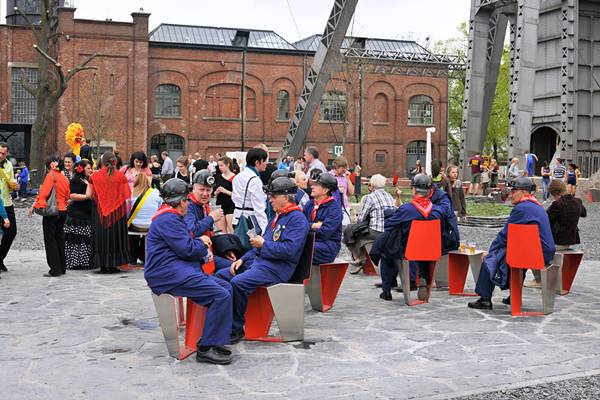 The Square at Night Time If during the day the Genk C-Mine environment is characterized by neutral colors only broken by the red chairs, at night a more dramatic atmosphere comes to life. The lighting design firm Painting with Light used a combination of cold and warm whites to accentuate the materials’ features and volumetric composition. The lighting design also included cool blues in reference to the local football team color and flashes of red to evoke blood and passion. As explained by the lighting design team leader, Luc Peumans, the red accents refer to the emotional value of the mine site for the Genk community, reminding them of the workers’ dedication to their challenging profession. 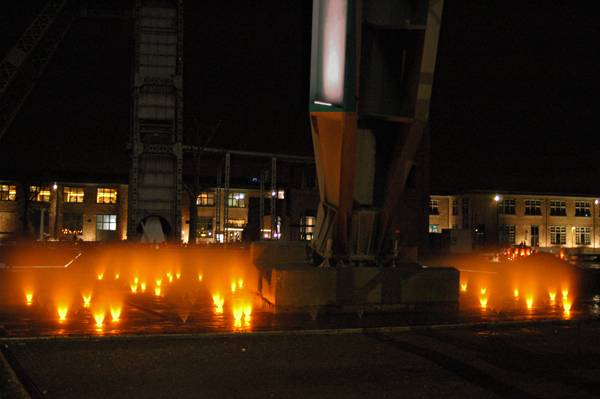 Peumans added that new technologies were fundamental to the lighting design’s goal of creating a versatile open space. The LED technology fitted into this purpose, due to the small size of the components and the controllable light angles. It also enabled designers to reinforce the meaning of the towers as the site’s landmarks with the installation of a mix of amber, white, and blue LEDLINES throughout the structures and at their bases, in addition to the use of special LED modules to light water jets around the larger tower. Genk C-Mine design teams worked coherently to create an attractive and versatile space, which is a fusion of industrial past and contemporary design. The use of modern technology enabled the transformation of the coal mine into a vital space with a varied program that met the expectations for a cultural center while preserving the historical heritage. Project: Genk C-mine. Design of the C-mine culture plan Location: Genk, België Designers: Hanneke Kijne, Petrouschka Thumann, Han Konings, Hilke Floris, Ronald Bron, Remco Rolvink Partners: ARA Atelier Ruimtelijk Advies, Carmela Bogman industrial design, Painting with Light, NU architectuuratelier Client: City of Genk Size: 0.5 ha. Year of design: 2006-2012 Status: completed Photography / illustration: Pieter Kers Other articles HOSPER have featured in: Private Estate Reveals State of The Art Underground Car Park Top 10 Imaginative Squares World Class Entry for Park Competition! Recommended reading: The Social Life of Small Urban Spaces by William H. Whyte Article written by Tania Ramos Gianone Published in Blog