Park Groot Schijn, Maxwan architects + urbanists, in Antwerp, Belgium. The Park Groot Schijn is an excellent example of how collaborations between local residents and designers can yield beneficial results for everyone involved. A group of designers including Maxwan, Karres & Brands, and Ten Ten worked with residents of both Antwerp and the District of Deurne to create a masterplan that encompasses a wide range of activities and programs that benefit both the people using the space and the environment. The first phase to be built, a 6.5-hectare park, is centered among highways and two small rivers that help to define the space and also helped to determine its overall shape and design. When Maxwan and Ten Ten first visited the phase one site they found it was home to large native woodlands and the meandering Koude Beek. During the planning phase designers served as mediators to reach a compromise between the need to preserve this natural beauty, what residents were asking for,and the governmental regulations. 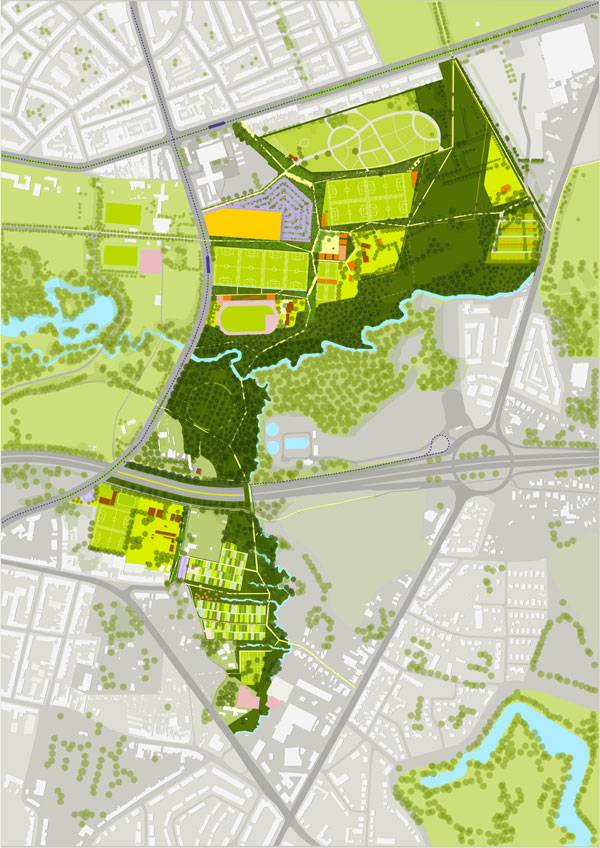 To accomplish this designers separated the park into joints (green areas) and rooms. The joints, or framework, essentially represent the paths and natural areas, or grasslands, which maintained their natural features and diverse plant species of native grasses and flowers. 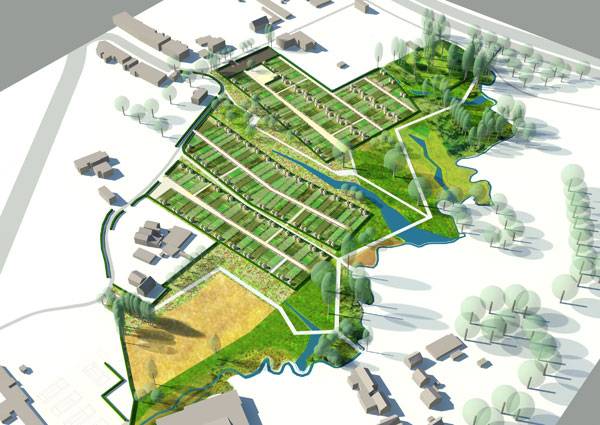 These areas also encompass the entrances to the park by extending into the surrounding urban network and connecting to existing green spaces in five separate areas. Here visitors are encouraged to stroll, run, or bike through the meandering paths. If so inclined, they can also simply relax on one of the many stark white sculptural seating areas that are in contrast to their natural surroundings and can be found all along the paths. Recommended Reading

These natural areas are separated from the rooms by fragmented woodlands, which designers intentionally left. Inside the various rooms one can find a wide variety of programs and functions, including sports, areas for children or dogs, an active caravan park and the allotments, or community gardens. Each room is fully equipped for its specific activity and were carefully placed so as not to interfere with the overall integrity of the park. 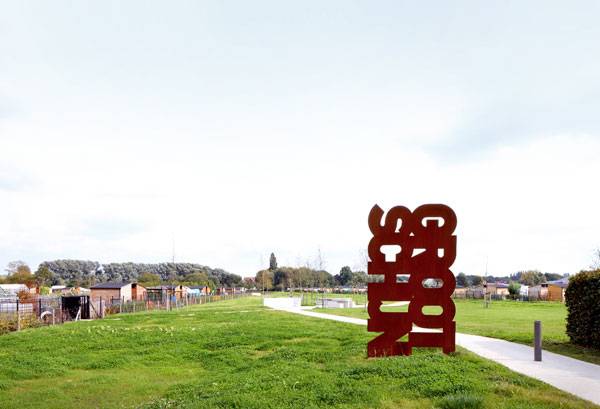 Listening to What the Residents Want

During the programming phase designers discovered early on the need for sports to be brought back to the area. Representatives from Deurne voiced the need to make the area a sports district but residents were also sensitive to the natural beauty of the land. 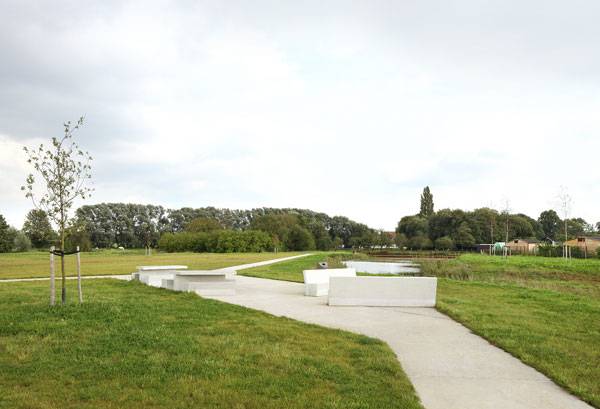 To do this, the city of Antwerp, the district of Deurne and the Working Group on Ruggeveld established a regional implementation plan, or charter to explain the vision for the area that would include a sports complex and recreation program for the people. This charter divided the park into three areas – Ruggeveld, Boterlaar and Silsburg. The Silsburg side is dedicated to the community gardens, dog clubs, youth associations and clubs while the Ruggeveld side would be home to the more active sports and leisure activities.

Building the Site in Stages

Due to the overall size of the entire finished park, it was designed and is being built in phases. The first phase, which includes the original 6.5-hectares is complete and is located to the south of the E313 highway. This phase includes the refurbished 172 community gardens and an additional 30 gardens and parking for 50 cars. Designers also made modifications to the existing terrain by adding four wadis, or dry channels, to deal with the water management on site.

Phase two has received the needed governmental funding and is scheduled for construction in 2016. When complete the project will encompass 83-hectares and will equal 5 percent of the total green and recreation space of the district of Antwerp.

The Masterplan for the Ruggeveld-Boterlaar-Silsburg was awarded the Flemish Spatial Planning Award for its innovation and excitement in the field of spatial planning. This award was also given due to the collaboration aspect of the project. In the end, over 40 groups actively participated in a total of 19 meetings where the design was discussed and revised at each one, a true feat in and of itself. 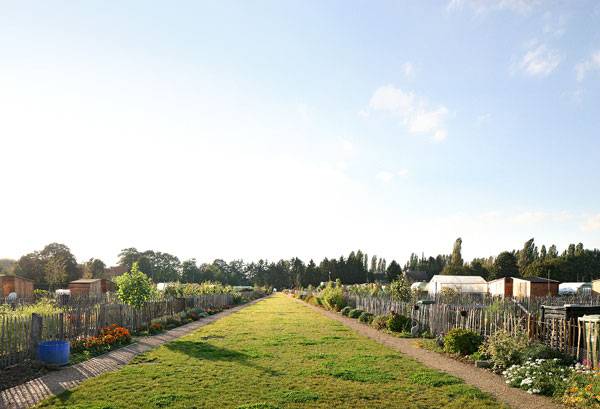 376 Entries to Name the Park

As a final nod to community involvement the design committee held a competition to name the park. They received 376 entries and on September 11, 2011 announced the chosen name, Park Groot Schijn, is in reference to the Schijn rivulet that runs through the park. This park shows that by consulting with the actual users of a space that community needs can truly be met without sacrificing the environment. But, with all of this collaboration was the actual design aspect sacrificed to create a space that was functional but not necessarily visually stunning? 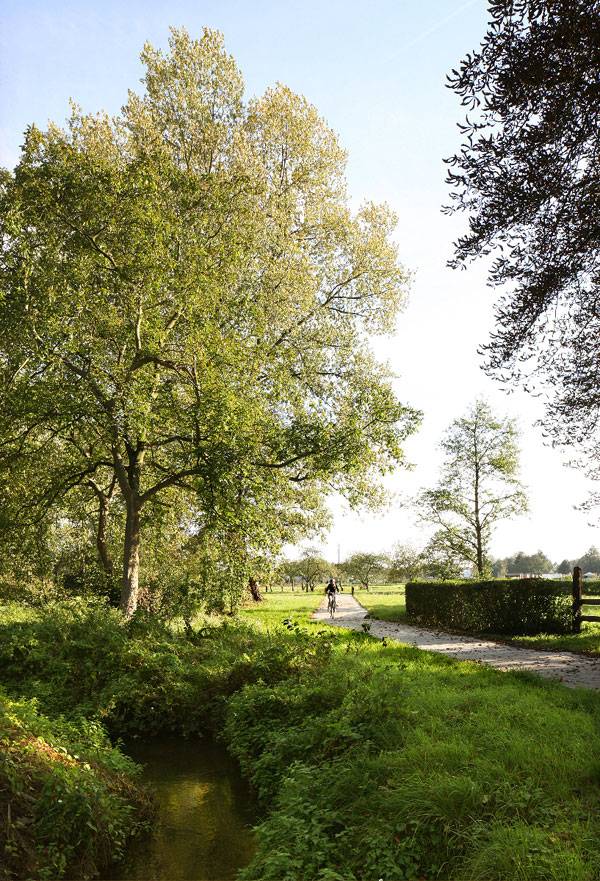