Across the East River from Manhattan, Hunter’s Point South Waterfront Park showcases impressive views of the iconic New York City skyline.  In addition to the sweeping views, the park also successfully demonstrates strategies for resiliency and aesthetic appeal in a complex urban environment. Although the project just opened last year, its reputation as a leading model of urban resiliency has already stretched far beyond NYC. 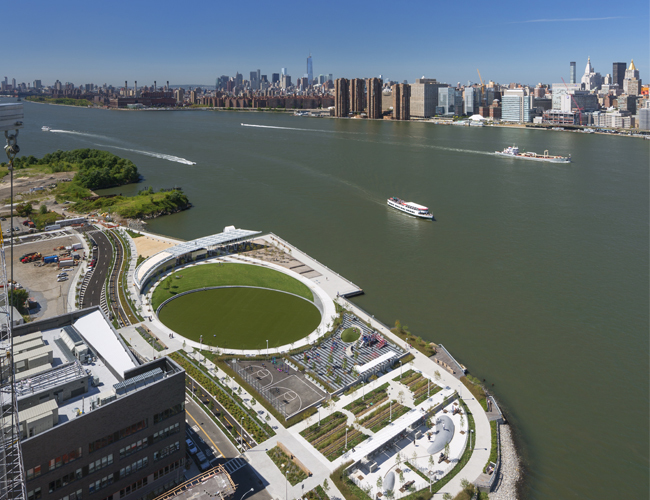 Hunter’s Point South from the north.  The elliptical lawn, with its flexible program, serves as the focus point of the park. Image credit: Albert Vecerka, Esto.

Designed by Thomas Balsley Associates, Weiss/Manfredi, and ARUP, the 11-acre waterfront park in Queens was created as part of a much larger Hunter’s Point South redevelopment of an old industrial sector. Once completed, the development will include 5,000 residential units, 100,000 square feet of commercial/public space, and a school.  On its north end, the park connects to Gantry Plaza State Park, an iconic park in New York that highlights the industrial history of the site and projects a rugged blue-collar aesthetic.  Since Balsley also designed Gantry Plaza State Park, certain aesthetic details were carried over but changed in tone.  Where Gantry State Park relies on the datum relationship between bank and piers, the edge of Hunter’s Point South gently sweeps in and out, mimicking a natural shoreline. 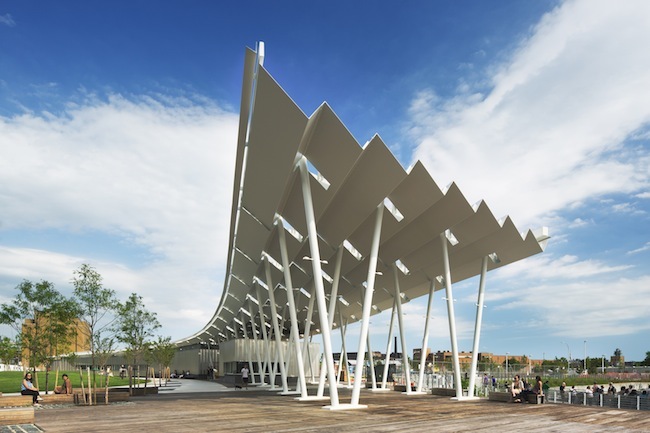 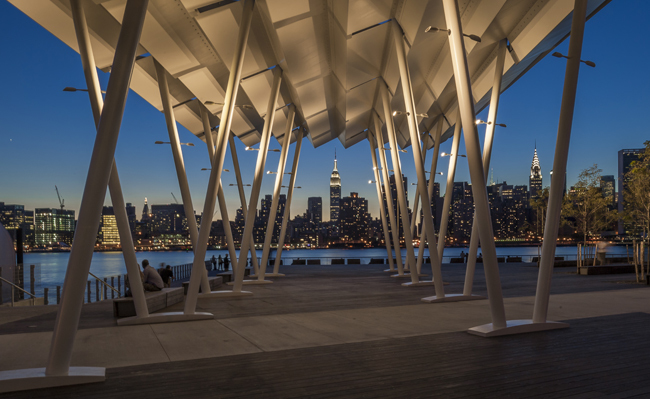 The park creates a compelling view of the Empire State Building from the pavilion structure. Image credit: Wade Zimmerman.

The park itself is split into two main halves: the active and the passive.  Near the school, the north side provides active programming with basketball courts, a dog run, a playground, a sandy waterless beach, and a central elliptical lawn.  This part of the park provides the essential draw for pedestrians, breathing life into the park.  The other half plays a passive role, providing paths and overlooks for pedestrians to stroll, contemplate, and enjoy the views. 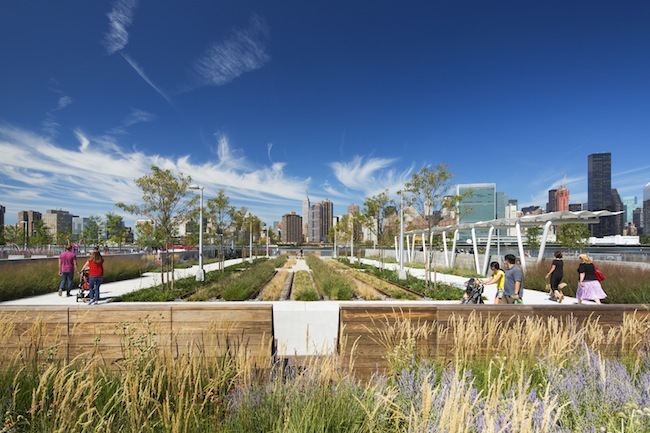 Overall, the park has a natural but clean aesthetic that marries the site’s industrial history to its new urban context.  Hunter’s Point South, however, addresses far more than the standard layers of urban design.  During the conceptual development of the park, Thomas Balsley Associates and Weiss/Manfredi knew that they had an important chance to address issues of urban resiliency, so the park was built to handle storm surges and flooding.  In heavily structured areas, the park is built to drain quickly while keeping certain areas above water. On the south side of the park, a marsh deals with flooding by using native species able to withstand periods of saltwater inundation.  In combination with a rip rap edge, the roots of the plants also prevent erosion in what could be highly volatile land. 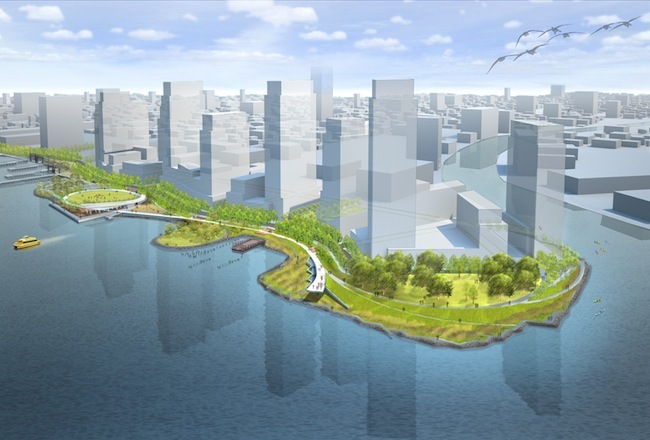 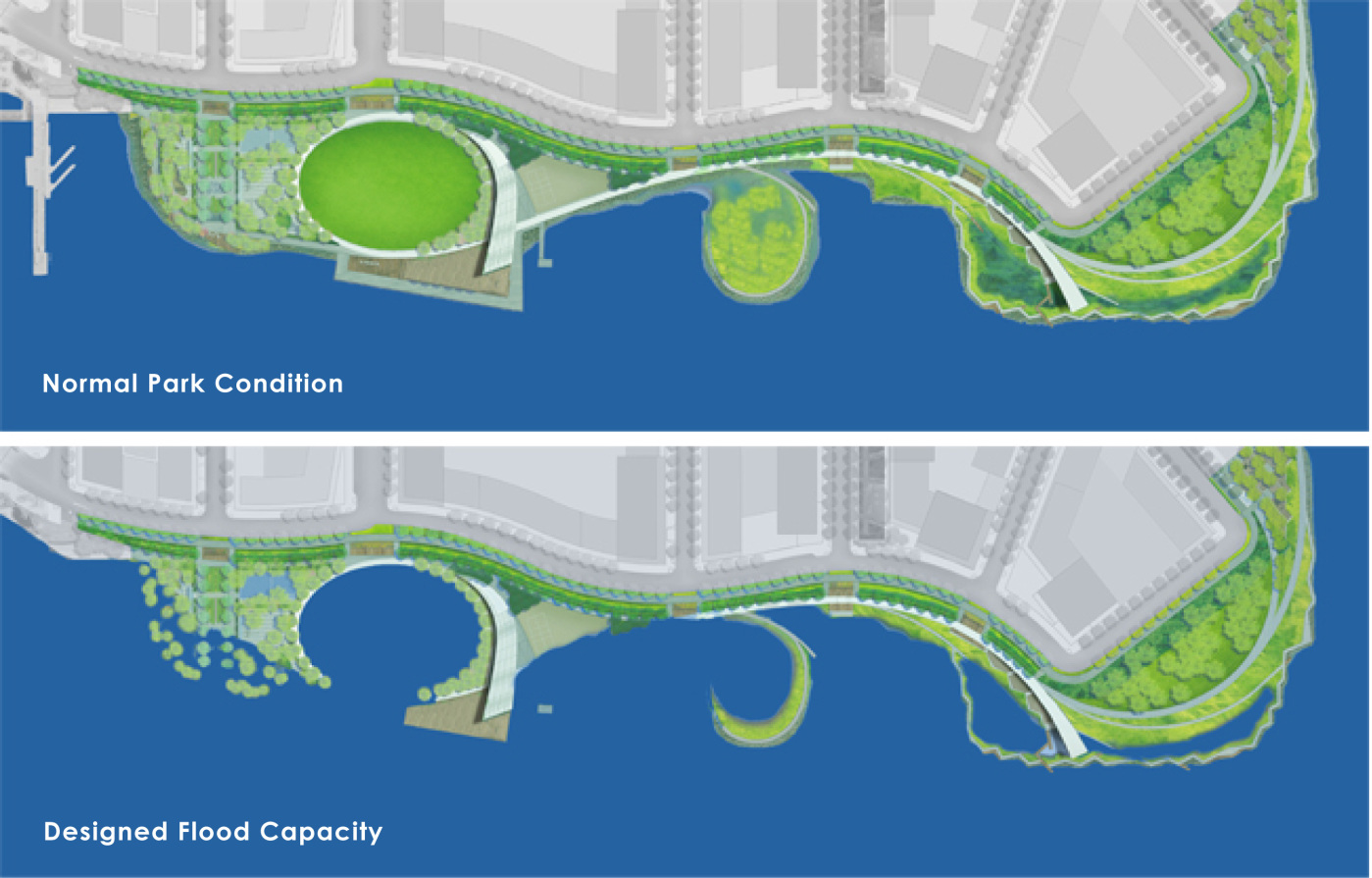 Parts of the park are designed to become inundated in response to strong storm events. Image credit: Weiss/Manfredi.

The flood capacity concept is not new and has been successfully implemented in other places prone to flooding.  Mill Race Park by Michael Van Valkenburgh Associates is one such example.  However, Hunter’s Point South does show the changing attitudes toward resilience in the planning and design field as well as the general public.  To top it off, the park’s design has already shown its merit.  Before it even opened, the park flooded in 2012 during Hurricane Sandy.  It drained as planned, and the project moved forward with little setback.  Ultimately, Hunter’s Point South demonstrates how landscape design can successfully integrate the concepts of resiliency and sustainability with a park that is first and foremost designed for people.