Since its founding in 1858, Denver, Colo. has been a city marked by periods of rapid growth and expansion. During once such period in the late 1800s, over three square miles of land to the northeast of downtown was completely urbanized in less than a decade. Unfortunately, in their haste developers failed to recognize the importance of a vital drainageway that collected stormwater from the Montclair and Park Hill drainage basins, a watershed covering over 17 square miles. As the area transitioned from natural rolling plains to a grid of paved streets and rooftops, an insufficient piped stormwater system soon led to floodwaters lapping at the doors of the residents who had settled in the working-class neighborhoods of Cole and Clayton. Reporting on this flooding dates back to the early 1900s, yet in the century since the city only made minimal attempts to mitigate its impacts. In 2015, the City and County of Denver committed to stormwater infrastructure investments benefitting the Cole and Clayton neighborhoods and soon after created the Platte to Park Hill project. 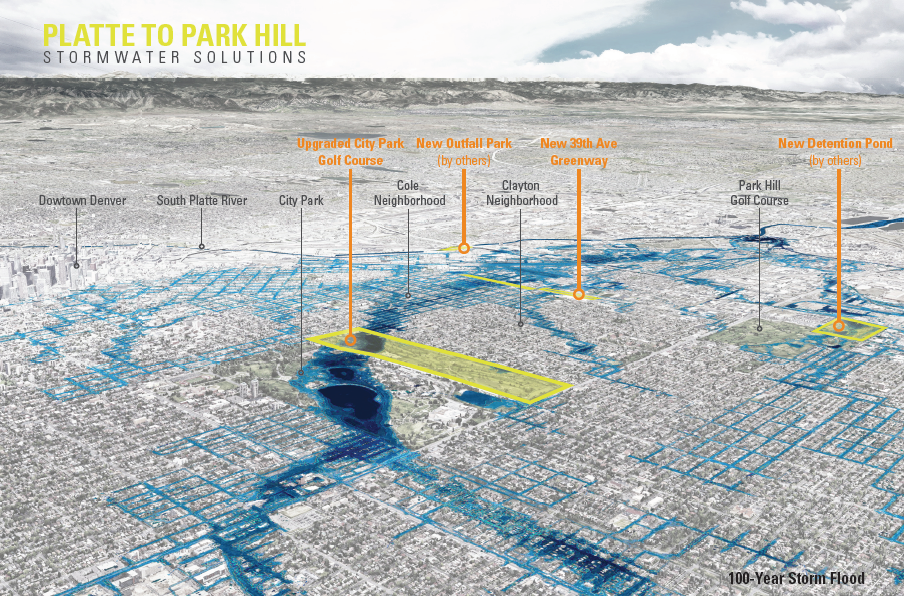 From an early stage in the planning process, it became apparent that this project presented the opportunity to not only mitigate flooding, but to also improve the quality of life and health of underserved residents. Both the Cole and Clayton neighborhoods have suffered from a lack of parks and open space. The presence of large industrial properties had disconnected the street grid, and unclean urban runoff contributes to decreasing water quality as the water flows toward its ultimate destination in the South Platte River. As a result, the provision of new recreational and mobility facilities, the reconnection of the urban grid and the incorporation of water quality best practices were adopted as critical success factors for the drainage system project. 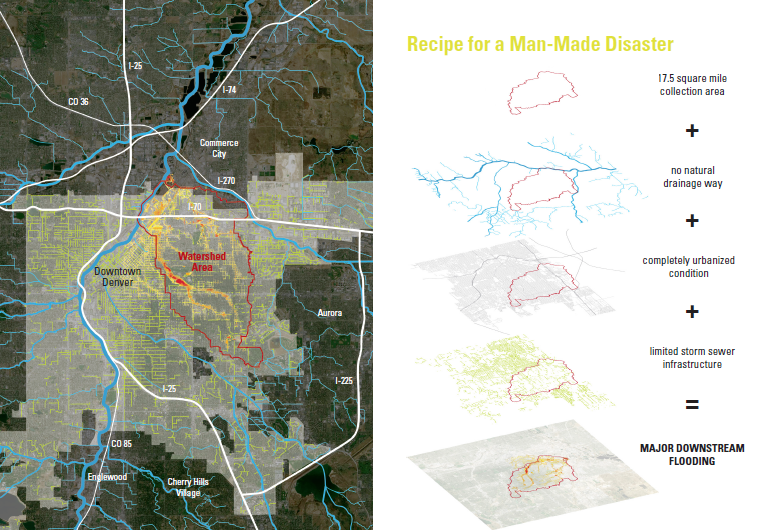 In approaching this challenge, the team understood that all options needed to be on the table and restoring the hydrological functionality of one of the city’s largest watersheds wasn’t going to be easy or without controversy. With little city-owned or vacant land in the at-risk neighborhoods, the acquisition and demolition of private property needed to be considered. The city-owned City Park Golf Course could be used as a mediation strategy, but not without significant impact to this important urban open space. Neither of these options would fix the entire flooding problem, and compromise was needed to balance neighborhood concerns.

With this understanding, the project team adopted a robust, multi-faceted engagement strategy that extended beyond the standard public meeting format to reach directly into the homes and businesses of community members. Over 100 meetings in various form, setting and scale were employed to ensure that the hopes and concerns of the city’s residents were heard. These meetings took the form of listening sessions, bus tours, open houses, neighborhood meetings, steering committees, native language sessions, and one-on-one sit downs. Not everyone was happy about the project, and not all desires were able to be met, but those who wanted to be heard were heard. This resulted in a project the met the needs and hopes of the majority of community members. 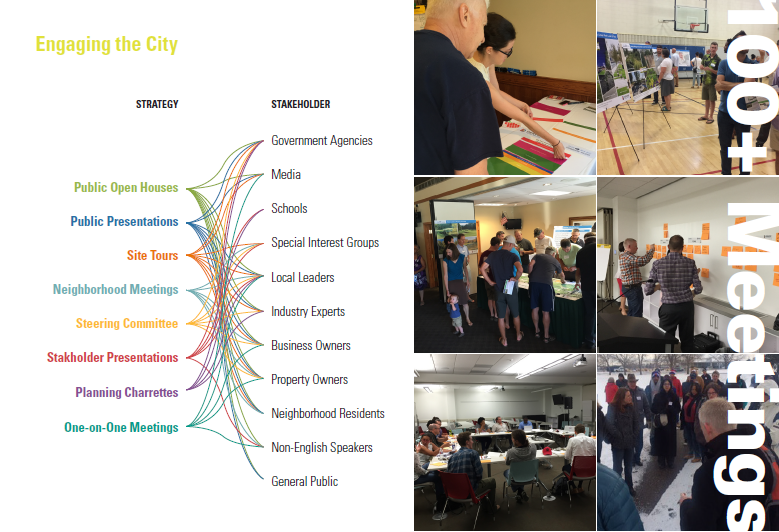 Overlaying the community engagement with the project’s complicated technical needs resulted in the development of an intervention strategy comprised of four individual parks and open space projects that would work in concert to capture and detain stormwater flows within the watershed and ultimately convey it to the South Platte River. While all four projects have their challenges, the two most disruptive projects proved to be a new 14-acre greenway and the redesign of the city-owned City Park Golf Course which includes:

The primary challenge in designing the 39th Avenue Greenway involved capturing the community’s desires for both an engineered flooding solution and a high aesthetic character and quality. One of the primary issues in the basin is the quality of stormwater run-off in piped underground infrastructure. To mitigate this, the new 14-block long greenway allows stormwater to move along an open, landscaped channel providing both increased capacity and water quality performance. In addition to being a technically functional solution to the flooding problem, the greenway also provides new open space and recreation opportunities for neighborhoods in need. The greenway also limited the need to condemn residential properties in the neighborhood, instead utilizing an existing disconnected city right-of-way as well as vacant and underused industrial land. 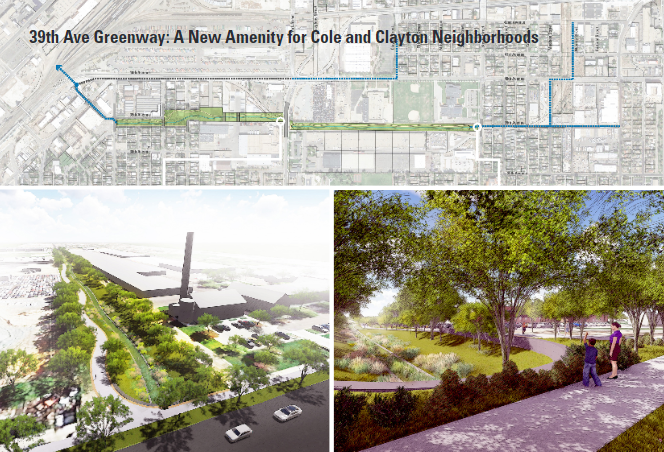 City Park Golf Course opened in 1913. In the intervening years, multiple changes were made to the course leaving only a historic grouping of trees and the spectacular framing of views of downtown and the Front Range as elements of the existing design – both of which have been included as elements on the course’s listing in the historic registry. Regardless of its historic authenticity, the golf course is beloved by neighborhood residents.

Located above the flood-prone neighborhoods, the golf course is also a 136-acre city-owned open space that is well-situated to mitigate the flooding impacts downstream. Doing so required a redesign of the course to re-grade portions of the golf course to hold and detain flood waters and slow flows through downstream neighborhoods. Working with the city forester, the project team went to great lengths to identify priority trees for preservation as well as significant stands to be saved. As a result, new routing and grading options were developed to maximize tree preservation. Concerns over the impacts to views from surrounding neighborhoods also drove the team to not only identify and catalogue priority views, but to also develop full scale 3D models and visualization graphics for each of the grading scenarios in order to demonstrate how views would or would not be impacted. 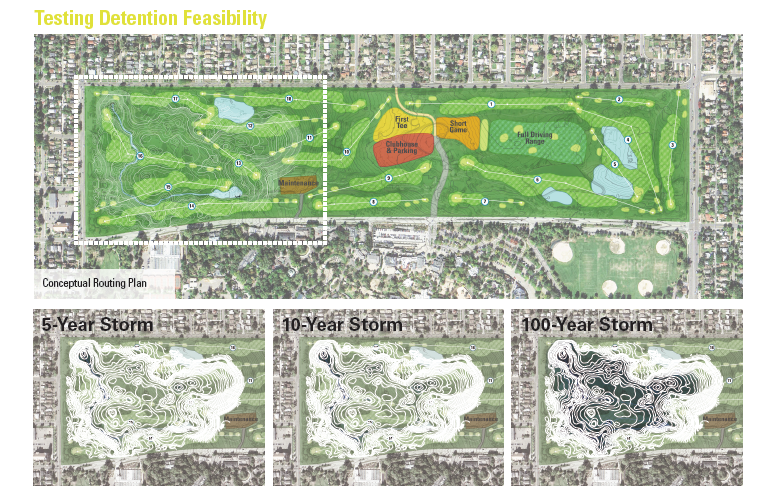 The result of these efforts is a project that not only provides additional flood protection to over 5,000 residences, but creates over 17 acres of new parkland in underserved communities, protects 96% of at-risk residences from demolition, reconnects the urban grid, and breathes new life into a beloved municipal golf course while preserving 99% of the priority trees and 100% of prioritized views. Since completing the planning work, both projects have undergone final design and are currently under construction with completion slated for 2020. 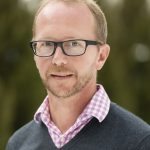 Chris Geddes joined Design Workshop in October 2014. With nearly 20 years’ experience in planning and urban design projects both in Colorado and across the country, Chris brings a perspective to his work that focuses on enhancing the quality and experience of the public realm through thoughtful engagement with those that use it every day. Since coming to Design Workshop, Chris has managed high-profile planning and design projects including the Central-70 Cover Design, Central-70 Aesthetic Standards, the Downtown Denver Parks and Public Spaces Master Plan, and the Colorado State University Medical Center. Chris has a Bachelor’s Degree in Civil Engineering from the University of Colorado Boulder and a Masters of Urban and Regional Planning from the University of Colorado Denver, and is a member of the American Institute of Certified Planners.land8 banner design workshop 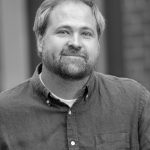 Marcus Pulsipher is a landscape architect, a certified planner and a passionate advocate for environmentally and socially responsible spatial design. Marcus got his start studying landscape architecture at Utah State University and later received a Master of Landscape Architecture in Urban Design degree from Harvard University, where he was awarded the Outstanding Housing Research and Design Prize. Professionally, Marcus has extensive experience working on and managing complex projects, interpreting and incorporating the needs of various stakeholders into meaningful solutions. He has worked on a variety of projects scales and types, from city-wide planning initiatives to reduce flooding in Denver, to greenway and park master planning in post-Katrina New Orleans. Marcus’s work is driven by a sincere desire to create places and spaces that have a meaningful, positive effect on the lives of the people who live, work and play within them; setting the stage for long term, sustainable community health and well-being.

Design Workshop
Design Workshop is an international design studio spanning the fields of landscape architecture, urban design, planning, economics and engagement. Since the first ‘Workshop’ in 1969, the firm continues to innovate with each generation, informed by changing economic context and the natural systems impacting our communities. A community of designers, architects, planners, researchers, and economists, we share a a deep commitment to design excellence and a holistic approach to creating places that stand the test of time. We design for people - not just today but for future generations. And in the rapidly changing world we live in, achieving a balance of resiliency and stewardship remains central to our work. We call this process DW Legacy Design®. Whether designing a private courtyard and garden, a new community within a fragile ecosystem, or transforming a brownfield site into an Innovation District, we strive to foster connections between people while creating meaningful, distinctive places.