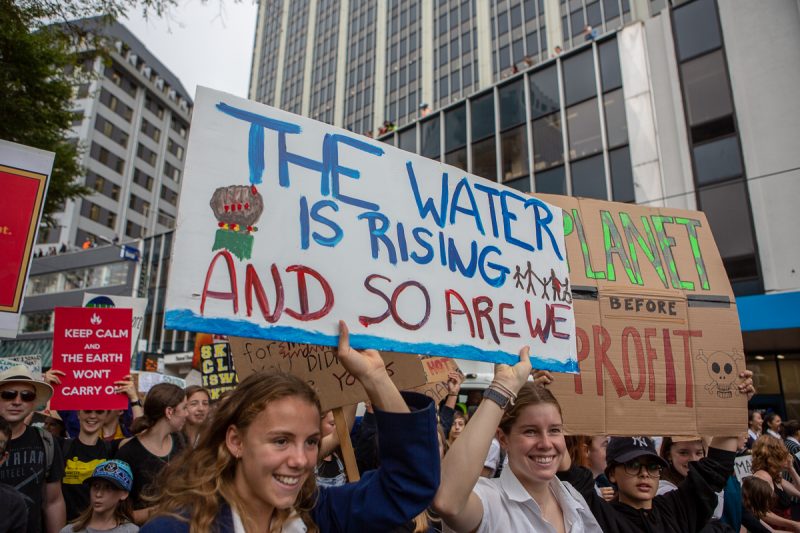 As the climate crisis intensifies and accelerates, a new generation of activists is emerging with startling suddenness. In an effort to stem this crisis, many young people are mobilizing rapidly.

Members of this group, styled “Generation Z,” were born within the last 25 years. Although derided by some as “snowflakes,” these young people are the largest generation in history. Bloomberg reports Generation Z will comprise “32 percent of the global population of 7.7 billion in 2019, nudging ahead of millennials, who will account for a 31.5 percent share.”

In the US, this is a group that understands climate change. According to recent study by the Harvard Political Review, “Over 70 percent of the Gen Zers polled…agree that climate change is a problem, 66 percent of whom think it is a crisis and demands urgent action

This large a group, and one whose overwhelming majority understands the issues, will hold enormous power. Appreciating their activism would serve landscape architects very well in the coming years. After all, they represent the future of the profession as practitioners, clients, and users.

Generation Z is the first generation to have seen the effects of the climate crisis for their entire – albeit short, so far – lives. Because of this, they understand climate change, and the associated ecological breakdown, as imperiling not just their economic and social futures, but their very existence. This has created a great sense of urgency among many of them, leading to stunningly impactful actions within just the last few months.

For example, it was less than 10 months ago that the then 15-year-old Greta Thunberg staged a solo protest at Sweden’s parliament to force action on global warming. Since then, her School Strike for Climate has inspired millions of students around the world to do the same, and given her message significant global audiences.

In the UK, the multi-generational but youthful Extinction Rebellion’s non-violent protests in April of 2019 led the British Parliament to declare a “climate emergency“, the first democratically elected government in the world to do so.  At the same time,the UK government’s chief climate advisory agency recommended for the first time an accelerated plan to cut the country’s carbon emissions to zero by 2050.  Soon thereafter, Ireland’s parliament became the second national government to declare a climate emergency. They have been joined by hundreds of local and regional governments around the world.

In the US, the youth-led Sunrise Movement has gained momentum, discussing climate change in “classrooms, living rooms, and worship halls across the country” and providing support for the Green New Deal. And Juliana v. US, a lawsuit filed by 21 young plaintiffs against the US government is proceeding. The young people allege that “through the government’s …actions that cause climate change, it has violated the youngest generation’s constitutional rights to life, liberty, and property, as well as failed to protect essential public trust resources.”

However, the current Administration’s Department of Justice has responded to the suit by demanding that it be dismissed, stating:“there is no right to a climate system capable of sustaining human life …because such a right is entirely without basis in this Nation’s history or tradition.”

A Vision of the Future

Undaunted by such callousness, the young activists are clear on one thing: they have accepted the climate science that warns that there is little time left to keep global temperatures from rising more than 1.5C, beyond which climate catastrophe looms.

To avoid this, the laws of physics require that humanity cut greenhouse emissions by 45% within a decade and reach zero use by 2050. Thus “Generation Z” must become the “Zero Generation.” In order to achieve that, the youth of today will “have lifetime carbon budgets almost 90% lower than someone born in 1950.” And most of that budget will be used in their youth: by the time they reach middle age, the Zero Generation will have no more carbon to burn.

If these young people succeed in helping us to avert the worst of the climate crisis, they will usher in completely new paradigms for landscape architecture. The end of carbon dioxide emissions means the end of fossil fuel use.  Unfortunately, the contemporary work of landscape architecture is thoroughly soaked in fossil fuels. Not using them will change the way we approach design and education, as well as our materials and construction methods, how our projects are maintained and even our ethics. Further, the need to drawdown excess CO2 from the atmosphere will require new approaches to every project. Read more about Post-Carbon Landscape Architecture on Land8.

In light of all this, how will landscape architecture respond to the youth of today? Positively, the goals of our work should be broadly attractive to the Zero Generation; landscape architecture offers so many possibilities for both mitigating, and adapting to, the climate crisis. This should provide us with great support in terms of new practitioners, clients and users.

But to ensure that we do not perpetuate the intergenerational injustice of climate change, then we must truly align our work to the zero fossil fuels reality. This is not an issue that is going away or that will somehow get better on its own.  It will require enormous changes. We should be leaders ourselves, not waiting on our children to push us.